Matt Sandercock, Director of Golf at the Mount Juliet Estate, talks about plans for a big week at the Kilkenny course 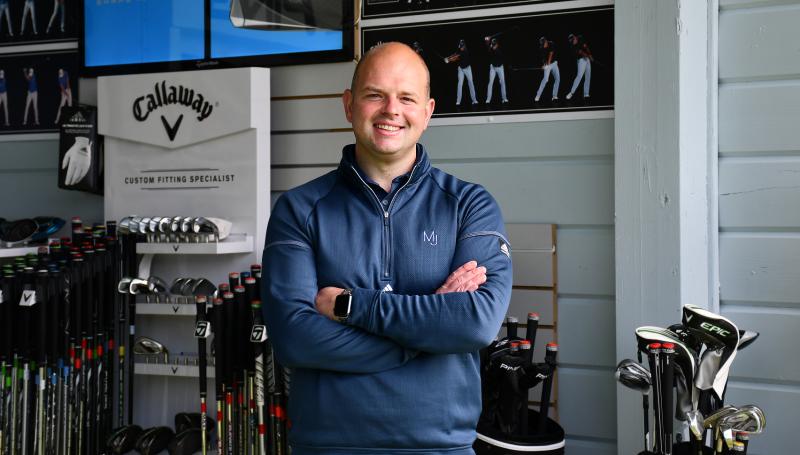 Matt Sandercock, Director of Golf at the Mount Juliet Estate

Matt Sandercock is a Fellow PGA professional and the Director of Golf at the Mount Juliet Estate.
Originally from Cornwall in the UK, he moved to Kilkenny in 2017 to take up the position in Mount Juliet after his good friend Paul McGinley told him about the job. He now resides in Thomastown with his wife, their two children and his parents.
Matt brings a history of coaching to all levels, including success with European Tour players. Through his coaching he has helped top amateurs take those final steps to being Tour-ready. He also takes huge pride in his ability to craft a swing from scratch with the beginners he has worked with.
With the Dubai Duty Free (DDF) Irish Open only weeks away, I caught up with Matt to see how he is preparing a golf course that will be seen by viewers all over the world. Since the European Tour was formed in 1972 their live broadcasts reach more than 490 million homes in more than 150 countries every week. So, as you can imagine, the pressure that is on Matt and his team as the biggest names in golf compete on their course next month.
Here is a glimpse into Matt’s world...
You’ve had an interesting four years as Director of Golf at Mount Juliet.
Yes I have, it’s been a crazy time to be honest! Take the weather we’ve endured, from a hurricane with Storm Orphelia and a drought. Then came Covid and delayed the DDF Irish Open and here I am on my fourth anniversary falling on the first day of the tournament. 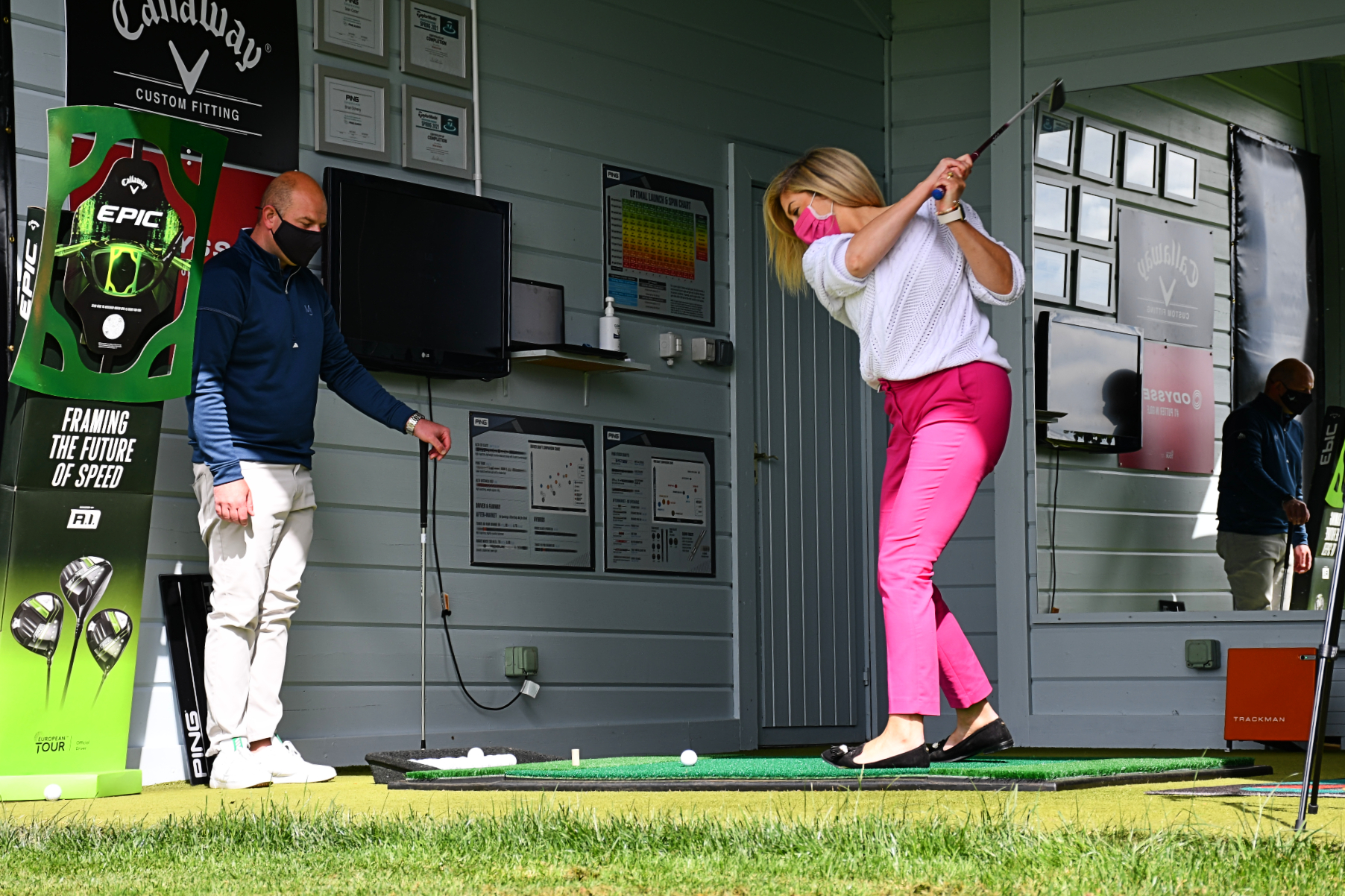 FORE! Matt Sandercock puts Siobhan through her paces at the Mount Juliet Academy

A PGA professional fulfils a very important role in a golf club. You are a Fellow PGA Professional - what does that mean?
There are different rankings and levels in the PGA. You start off as a PGA Professional, then you go to a double A Professional, Advanced and then a Fellow PGA Professional. It’s a lot of extra learning and involves different levels of my job with coaching and high profile coaching.
You are one of the younger Fellow PGA Professionals at the age of 33.
As far as I am aware I am. I’ve gone as far as I can now until I’ve done 25 years of service! It’s quite a long time until I get to the next step in the PGA, but I’ll keep going, learning and trying.
Did you ever play on tour?
No, I never got that far. I enjoy the game a lot and I played a good level as a junior and amateur.
I played regional golf and had a couple of Pro-Am victories, but my heart and passion has always been in coaching. I followed that route from a very early age. That was my main focus.
You introduced the Golf Academy at Mount Juliet. What do you do at the Academy?
At the Academy we coach and do fittings. We do evenings, mornings in winter and rain because we now have the indoor facilities and the simulator. It also allows the guests to play golf internally, so in the middle of winter we can get you onto a golf course indoors!
Put simply, we make your game improve.
At the Mount Juliet Golf Academy you coach everyone, from beginners to seasoned golfers and professionals.
Yes I worked beside everyone from European Tour and Walker Cup players right down to the people just starting out.
Brian Doheny joined us this year at the Academy as a PGA Coach and Sean Cotter is our Resident Professional since 2002. Over the years Sean has developed his learnings.

The fear was we couldn’t have any crowds. To be able to welcome people to Mount Juliet Estate for the Irish Open is fantastic

The Academy is second to none in our region, it’s a great addition to Mount Juliet. We now have three of us here coaching and fitting top brands like Callaway, Taylormade, and Ping.
What professional golfers have you coached?
I watched over Anthony Wall for a number of years and Paul McGinley, who I am great friends with. When I coached at Sunningdale, I helped Stiggy Hodgson, who is a Walker Cup player, with his short game.
I also worked at the Alfred Dunhill Links for a few years so I had a very varied coaching past. I enjoyed all of it, there’s not one level I prefer to coach in. The test is always there and you can still see a smile on a player’s face when they improve. No matter how good or bad they are at the start, they always have an end goal in sight.
You must be excited and relieved to have the official word that the DDF Irish Open is coming to Mount Juliet.
Until the official announcement was made last week, every day was a rollercoaster. There’s been so many highs and lows around the event.
We had such a good field of players set for last year. Now you look at this year’s field of McIIroy, Harrington, Lowry and McDowell - it’s incredible. Then you see Jonathan Caldwell at the weekend, winning his first European Tour. We really hope he is going to add to the Irish contingent of winners.
It’s just super exciting to have these guys on the Estate.

We are two weeks away from the DDF Irish Open. Is the course getting tougher for your members to play on?
Yes, it is tough. I’m not going to hide the fact that you really need to be on your game to play the course at the moment.
We are welcoming the best in the world so we can’t have the big wide fairways and the super short roughs. We now have four inches of rough, which will be the growing height for the tournament.
When are you closing the course to the members ahead of the DDF Irish Open?
We are closing on Sunday, June 20 - the course has to have a week’s rest, so to speak! Our greenkeepers will attack it from all angles. When there’s no one in the way you can see how much work really needs to be done.
Tournament week, which starts on Monday June 27, is all about refining the course and doing all the pretty bits around the edges.
Mount Juliet has hosted crowds of up to 30,000 at tournaments. You’re not expecting those numbers this year!
No, as Covid has put stop to all that. We are delighted we can have people here for the Irish Open, there was always the fear that we couldn’t have anyone. To be able to welcome people to the Estate that week is fantastic.
The benefit for the people who are lucky to be able to attend the event is that they will be able to see these players up close and personal. There won’t be your usual 5,000 to 10,000 per group following the big names.
It will be amazing for our members to be able to see up close and witness it on their own golf course. To be able to hear how the ball is struck and to see these guys take a put on a course that they play every week will be special.
How much are you looking forward to the DDF Irish Open?
I don’t know is the answer! I am so excited for us to have it but there’s still so much for us to do.
To be able to welcome the top players here is surreal. It’s a bit strange to think Tiger Woods once stood here. So for the next generation coming through it’s great for them to remember where they saw the likes of Shane Lowry taking a putt or Rory Mcllroy taking a tee shot. Those memories are crucial.
It’s been 26 years since Sam Torrance won here, so the last Irish Open memories are fading for some people. Now we need to recreate our own history.
What comes next is the exciting part for us.

Watch Siobhan’s series of golf interviews on our website www.kilkennypeople.ie