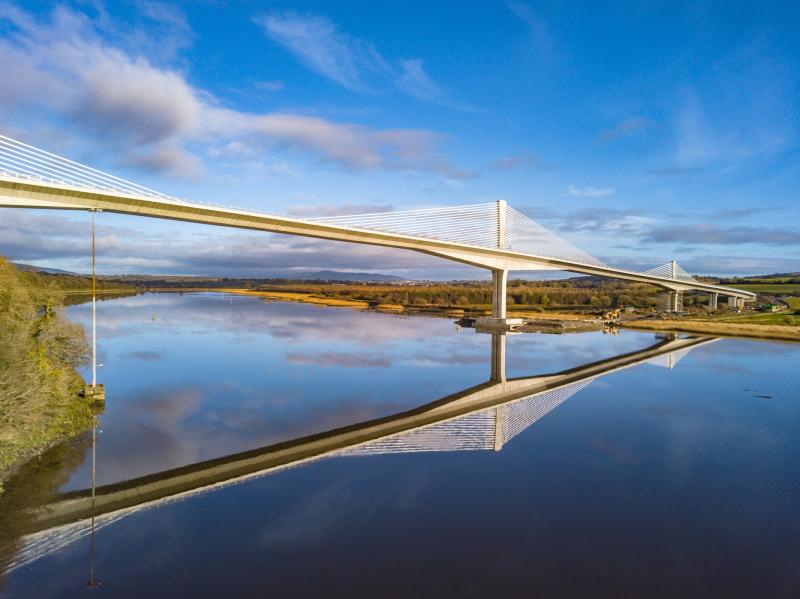 The Rose Fitzgerald Kennedy Bridge in South Kilkenny - the longest bridge in Ireland - has been awarded the 2021 International Association of Bridge and Structural Engineering (IABSE) Outstanding Structure Award.

Part of the country’s strategic N25 New Ross Bypass PPP, the win marks the first time an Irish project has secured the prestigious global award for the most remarkable, innovative and creative structures.

Recognised under the ‘Bridge or Other Infrastructures’ category, the Rose Fitzgerald Kennedy Bridge has pushed the boundaries for the span of concrete extrados bridges. Constructed by the BAM Dragados JV, the structure, Ireland’s longest bridge at 887m in length, holds other records: at 230m each, its two main spans are the longest post-tensioned concrete spans in the world.

The side spans over dry land on both sides of the River Barrow were built using a scaffold and a wing form traveller. The main spans were built using the balanced cantilever method. At its maximum length from the central pier, the west span cantilevered 140m over the river.

The 36m high, 887m long bridge crosses the River Barrow between Wexford and Kilkenny and forms a major part €230 million N25 New Ross Bypass PPP which has greatly improved connectivity in the South East of the country and reduced travel times on the strategic Cork to Rosslare corridor.

“We are delighted that the bridge has been internationally recognised for its engineering excellence and are we very proud to have built such an iconic structure. Congratulations to Tadhg Lucey (COO BAM Civil) and all the project team for their exceptional hard work in delivering this outstanding piece of infrastructure," said BAM Ireland CEO Theo Cullinane.