Ghosts, religious recluses and abductions - stories of what lies beneath Kilkenny! 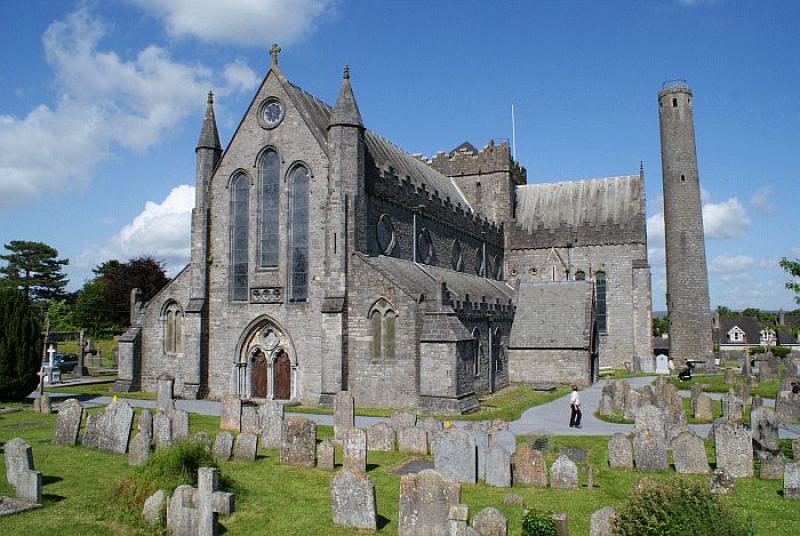 We were regaled with stories, anecdotes and facts regarding what lies beneath the gravestones of St Canice’s burial ground

She is walking slowly along Rose Inn Street. Pale, petite and dressed all in black.
From head to toe – black. Witch came to mind but she is not wearing a witch’s classical cone-shaped hat.
A black hat, yes, and a black gown-like dress. She could have stepped out of a Dickens novel. It was all quite Victorian and rather mysterious.
And she is carrying a staff with a small, flag-like notice at the top: ‘Graveyard Tour’.
That’s when I stopped and enquired: ‘Which graveyard?’ ‘Saint Canice’s’, she answered gently, ‘3pm’.
Five to three my wife and I arrived in the graveyard of St Canice’s Cathedral and rendezvoused with ‘The Lady in Black’, aka Sarah Myler, for a most interesting and informative tour of the tombs and graves spread around the hallowed grounds of the church that gave our city its name – Cill Chainnigh, Church of Canice.
ANECDOTES
Over the next hour Sarah Myler engaged us with stories, anecdotes and facts regarding what lies beneath the gravestones of St Canice’s burial ground, not least who’s buried beneath St Canice’s Tower itself, Kilkenny’s oldest standing building.
We learned about anchorites, religious recluses, who literally sealed themselves into cell-like structures for their entire lives. We learned about The Abduction Club, in particular Connell Loughnan, a successful 18th Century banker in Kilkenny whose great wealth put his daughter at risk.
Connell lived during a time that was blighted by abduction clubs which were made up of disenfranchised young squires who were unable to access gentlemanly professions or the family fortune due to their religion or because they were second sons. They bonded together to kidnap young heiresses and marry them in order to inherit their fortune.
Connell knew of the club’s reputation and had 12 servants with muskets guard his daughter Elizabeth. However, on July 7, 1766 a gang of 40 members of the abduction club kidnapped Elizabeth near Callan. She was taken to Wales, where she was forced to marry her abductor or be left to starve in a coal mine.
In spite of the forced marriage Elizabeth had to remain married to her abductor, Francis Shearman, as she was seen as tarnished by the event. All of which brought to mind a film, ‘Abduction’, shot here in Kilkenny back in the late ’70s or early ’80s featuring Brendan Corcoran, who duly informed me that the film, directed by Pat Nolan and produced by Jody Cahill, also featured Liz Flynn and the late Ann Bourke and Dónal O’Brien and was made by the Carlow/Kilkenny Cine Club.
GHOST STORY
Of course no tour of a graveyard is complete without a ghost story and Sarah relayed the following to us: the story of a vicar’s wife who died of grief at the death of her young son.
The effect of this double tragedy was twofold: the lady herself was said to appear as a ghost in the cottage where she lived, near the Cathedral library, but only men, especially young boys, can see her.
There are many accounts of boys seeing a ghostly woman staring mournfully out the window, invisible to everyone else. She has this special affinity with boys as she remembers the loss of her own son. It was also said that only boys would be born to the women living in the house, and that, by all accounts, is true.
And if you want to know more here’s Sarah’s website, and email, if you wish to make a booking www.churchmousetours.com and churchmousetours@gmail.com.
I have to say it was the most interesting hour I’ve ever spent in a graveyard (apart perhaps from Père Lachaise in Paris but that’s another story) made all the more enjoyable by Sarah’s friendly and pleasant presentation.
As we left the graveyard I got talking to Zoe and Nate from the States. Zoe is studying Creative Writing in Trinity College while Nate is doing a masters in the Smurfit School of Business in Blackrock. Zoe and Nate fell in love with Kilkenny and expressed a wish to get married here.
That’s when I started thinking of some interesting wedding venues and wondered is it too late to become a Wedding Planner?
Then I came to my senses, wished Zoe and Nate well and steered them into Rothe House & Garden for another very interesting tour on our doorstep.