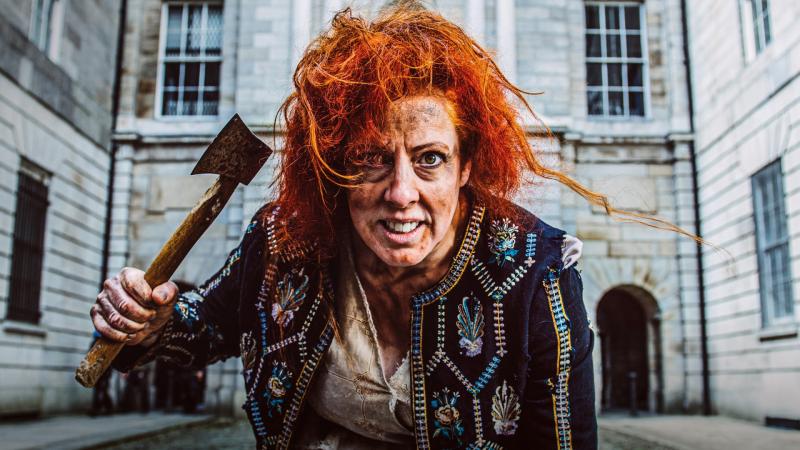 Live performances will return to the Marble City as part of this year's Kilkenny Arts Festival, which runs from August 5-15.

The festival has this morning announced details of the programme, making a welcome return in the midst of an ever-changing landscape. Tickets go on sale this Friday, July 9.

"Through collaboration with artists, festival commissions and co-presentations with artistic partners, Kilkenny Arts Festival is very proud to provide both a platform and supports to artists creating extraordinary work," said organisers in a statement.

"This year that includes working with a number of artists to find the space and support to explore new directions with confidence."

Audiences will have the chance to experience events in person, premieres in theatre, music and visual art in the city, albeit in limited numbers (working within Government guidelines). The festival is cognisant of the importance of retaining a digital strand in the programme, engaging with broader audiences and facilitating those who may not yet be in position to attend in person.

“The challenges for festivals and the arts remain profound, and sometimes almost too great to fathom," said festival director Olga Barry today.

"Yet, within and through those challenges, the creative sector shines bright and bubbles with talent and ideas. We’re very proud to bring these artists and experiences to audiences in Kilkenny and beyond this year. It is our hope that bringing artists, audiences and communities together in spaces both new and old to witness unique and original work being created, will fill our hearts in August.”

Some highlights of the 2021 programme include:

Tickets go on sale at 12pm this Friday, July 9,from kilkennyarts.ie.

The programme in more detail:

Irish National Opera in association with Kilkenny Arts Festival present a fully-staged, outdoor production of Elektra. Richard Strauss pushes the boundaries of his musical art to depict the psychological distress of a world in which its anyone normal who stands out as strange. Directed by Conall Morrison and conducted by Fergus Shiel, this will be INO’s largest-ever outdoor undertaking. It will also mark the return of live performances to the atmospheric surrounds of Castle Yard as part of Kilkenny Arts Festival. Belfast soprano Giselle Allen makes her INO debut as the vengeful heroine, leading an extraordinary cast of ten, including Máire Flavin, Imelda Drumm, Tómas Tómasson, Peter Marsh and Rachel Croash.

For the first time, Karan Casey tells her own stories and sings her own songs in this world premiere theatre production at the Watergate Theatre. Part song-poem, part music performance, I Walked into My Head is a moving, funny and joyful exploration of life from one of Ireland’s folk and traditional music legends. Directed by Sophie Motley, presented in partnership with the Watergate Theatre, and in association with The Everyman.

The festival continues to bring extraordinary art experiences to unexpected locations. Street art blends with contemporary art for the premiere of Carnival of Shadows, as Kilkenny’s new Abbey Quarter skatepark after dark, provides the inspiration and canvas for a new site-specific, multi-sensory installation from the award-winning Dumbworld. Writer/director John McIlduff and composer Brian Irvine respond, through music and film, to the design and aural sweep of the space, exploring the ways in which history is made, lost and rediscovered. Blending field recordings as well as content inspired by a period of intimate research at the new skatepark, capturing the imaginations and hallucinations of Kilkenny residents, the innovative new work will open up a secret door to an alternative world which audiences will experience while wearing headsets as they are immersed in a fusion of images and sound.

The Franciscan Abbey in the heart of Kilkenny is once again entering a new era of its life, in a new and evolving version of the city. To mark this fleeting moment in time, composer Peter Power gathers an award-winning creative team including Michael Gallen and Sarah Jane Shiels, to present The City is Never Finished, a multi-media live theatre installation on the grounds of this iconic site.

From Rough Magic Theatre Company, Tonic propels us into 2047 where global civilization is one false move away from extinction. Hope for a return to the halcyon days of the 2020s comes in the form of an incredible new tonic, 'The Preventive', which claims to immunise those who drink it against the harmful effects of recent biochemical warfare. Charged with distributing this miracle elixir are the notorious Calibri Triplet Family Band. Their message is simple- everyone must drink the tonic for it to be effective. There can be no exceptions. Tonic is a spectacular new medicine show infused with a wild, genre-spanning live score and staged with dystopian panache. Directed by Ronan Phelan, written by Fionn Foley this is the show that has everything you need to get over a life-altering cataclysm. Presented outdoors in St. Canice’s Cathedral Orchard.

Kilkenny-born artist Richard Mosse’s video installation Incoming was made in response to the ongoing migration crisis in the Mediterranean. In creating it, Mosse employed a highly specialized surveillance camera designed for military use that captures images by detecting thermal radiation, including the heat of a human body, from more than eighteen miles away. Exposing the intimate stories of these refugees while providing a veil of privacy, the work isolates the plight of individuals while rendering them emblematic of humanity. Made in collaboration with composer Ben Frost and cinematographer Trevor Tweeten Incoming is a highly immersive experience and Mosse’s work asks timely, urgent questions about the ways in which the West tends to think or not think, about refugees. This Irish premiere is presented in partnership with Butler Gallery. Runs until August 29.

At Butler Gallery, Invitation to a Journey is an intriguing film installation, with music from Deirdre Gribbin, performed by Crash Ensemble and film by Eoin Heaney. Inspired by the original stage production of Invitation to a Journey, a young female architect working in a (still) very male oriented world shares Eileen Gray's sensibilities, her excitements and successes, frustrations and disappointments mirroring that of Gray. Through impressionistic and lyrical imagery we experience her subjective point of view on the visceral experience of craft and working with materials, the erotics of architectural shapes and form, and the emotional fallout of strained relationships and dealing with the misogyny, belligerence and stupidity that prevails in architectural offices and during building construction. The original stage production was presented by Fishamble: The New Play Company, CoisCéim and Crash Ensemble for Galway International Arts Festival 2016.

In 2020 Crash Ensemble commissioned 9 Irish composers from outside of the new music sphere, to create 5 minute responses in music, to their experience, the current state, or their thoughts for the future. Composed for two instruments within the ensemble, explore the outcome in Reactions, an installation at Butler Gallery which gives insight into both the creative process and performances. Featuring work from composers Dave Fennessy, Deirdre Gribbon, Rachel Lavelle, Bébhinn McDonnell, Steve Shannon (Mount Alaska), Anna Murray, Anselm McDonnell, Sean Ó Dálaigh, Amy Rooney, the films were shot and edited by Laura Sheeran.

The result of two years work, half of which was spent in lockdown, The Nineteen invites us to explore a series of abstract paintings exhibited for the first time by Helen Comerford. These 19 works take us on an epic journey, echoing the covid journey undertaken by all of us. A journey, through trials and tribulations, leading to our transformation and eventually generating our own light.

Presented by Kilkenny Arts Office Shiftings explores the untold stories of Ireland’s colonial past, bringing alternative histories and othered voices to the fore. Artefacts laid buried for centuries; communities forgotten and stories gone untold. Through the act of digging up the past and speculating what could have been, we may unearth knowledge that reveals a collective cultural memory seen anew through queer, feminist, and decolonial perspectives. Featuring artists, Kian Benson Bailes, Ailbhe Ní Bhriain, Ursula Burke, Ruth Clinton, Maeve Coulter, Niamh Moriarty and Katharine West. Discover in person at 75 John Street Lower, John's Green, Highhays or online.

ERA DCCI Jewellery and Goldsmithing graduate exhibition showcases the craftsmanship honed by twelve students during the two-year programme. Taking inspiration from delicate natural forms to bold geometry, and personal narratives to contemporary refined design, each maker demonstrates their own signature style. Presented by the Design and Craft Council of Ireland/National Design & Craft Gallery at the National Design and Craft Gallery: July 22 - October 9.

Irish Craft Heroes, highlights 50 Makers x 50 Years in a major outdoor exhibition in Kilkenny Castle and Castle Yard. Celebrating makers whose work has significant legacy, has heralded new approaches or changed the way we look at the world, this exhibition charts the evolution of the craft and design sector in Ireland over the last 50 years. Chosen from over 600 nominations, it coincides with Design and Crafts Council Ireland's (DCCI) 50th Anniversary. Presented by the DCCI/National Design & Craft Gallery July 22 - October 6.

Together Now is an exhibition of painting, drawing, installation and sculpture by artists from the Kilkenny Collective for Arts Talent (KCAT) in Callan, Co. Kilkenny, and artists from very different practice contexts from all over Ireland, who have been working together in residencies and other forms of engagement since 2014. The work on show has been made as a result of their collaborations and conversations involving performance, installation and a variety of media, from film and video to very un-traditional interpretations of traditional media such as painting and sculpture. Presented by KCAT Arts Centre, Callan  July 22 –  August 15.

Artist Blaise Smith continues his portrait project Village People celebrating and recording the residents of his village, Dungarvan. Explore the process online. Streamed, throughout the festival.

Over two days, a number of artists will perform unique 15 minutes Encounters exclusively for your household pod. Performed in various locations across the city, on the day you will discover whom your artistic encounter will be with.

The Festival would like to sincerely thank all its sponsors, the local business community, volunteers, friends and audiences for their continued support and commitment In these challenging times.