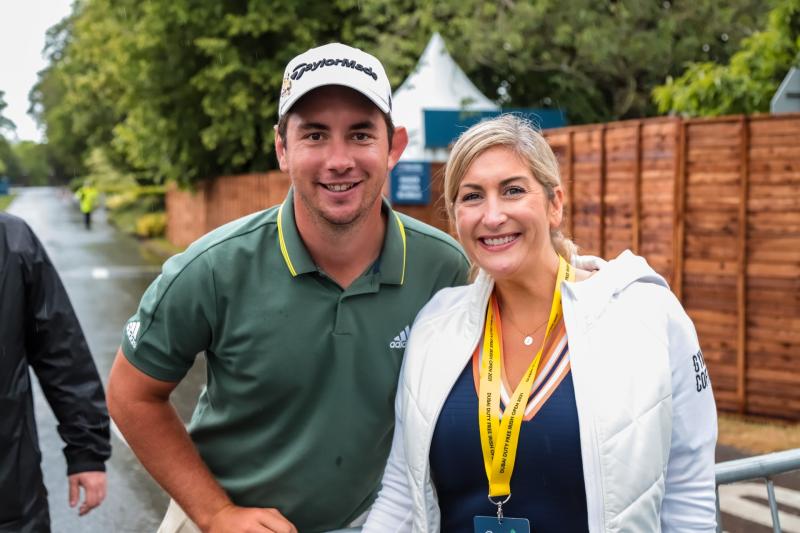 Siobhan Donohoe with Lucas Herbert, the winner of the DDF Irish Open at Mount Juliet

Between the drives, the putts, the narrow fairways and the high roughs, it was some week of highs and lows at Dubai Duty Free Irish Open.
The lows? Well, none of Irish golfers made the headlines on the Sunday, but the highs were following them around the course and Lucas Herbert’s extraordinary wire-to-wire triumph.
PRO AM
My week in the European Tour media bubble started on Wednesday for the Pro Am, where the field was full of professionals, celebrities, members and sponsors.
Each pro took out three amateurs to play the course. It’s always a bit of craic on pro-am days, plus the pros get to play the course in a relaxed manner before the real tournament tees off the next day.
With no spectators allowed on the Wednesday, I got a real bird’s eye view. Those of us that could had great fun following Rory McIIroy’s four ball – DJ Carey, Johnny Sexton and Rory’s dad. 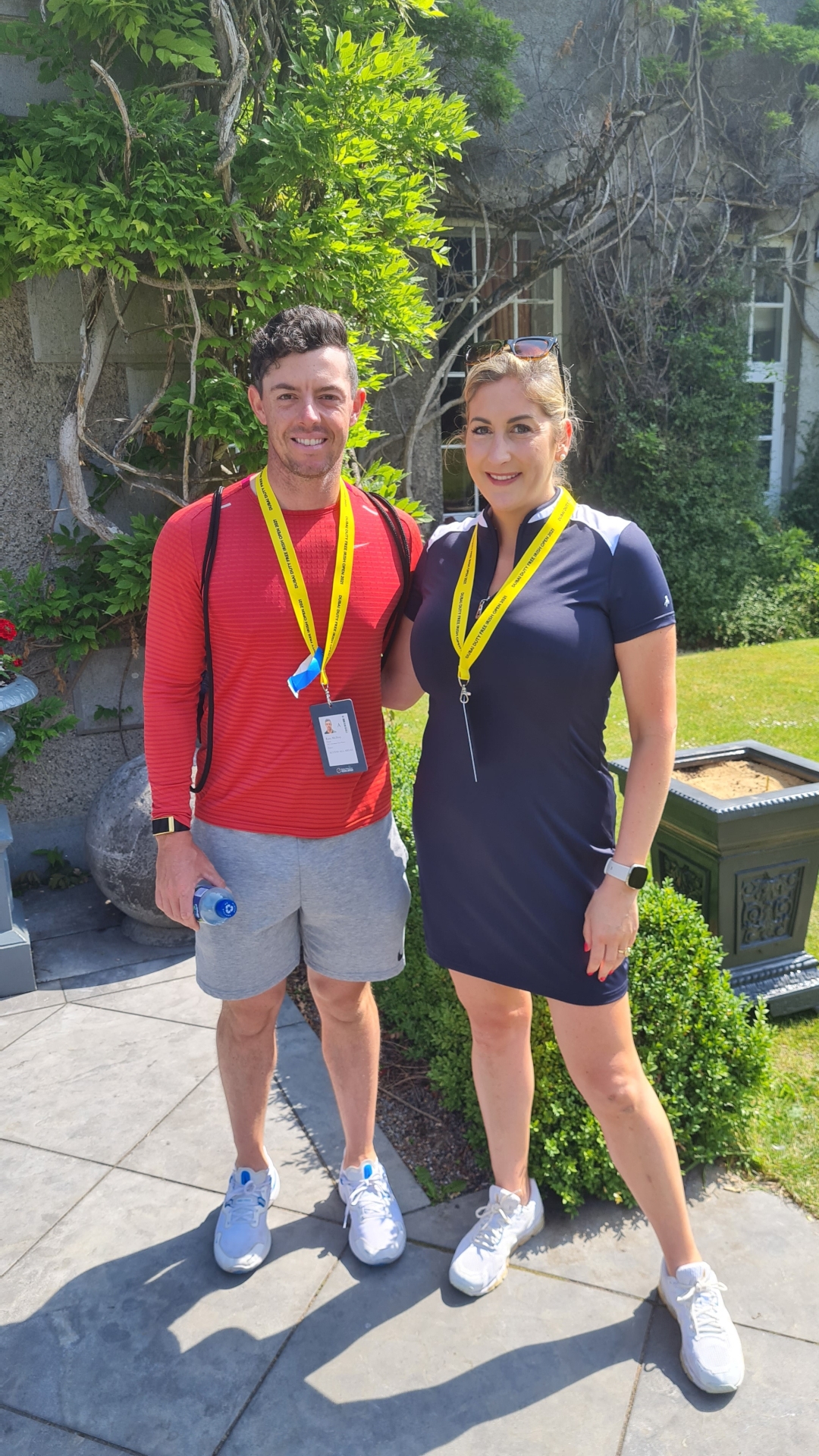 DJ told me afterwards what a soft spot he has for Rory.
“Last year I said he would be my dream player to be paired with,” said DJ. “Sometimes it’s not always a good thing to meet your hero, but Rory didn’t disappoint, he was a gentleman to meet and play with. Playing with these guys who are at the top of their game is incredible.”
I also got to interview my hero – Des Smyth, legend Irish golfer and Ambassador for the title sponsor Dubai Duty Free. He had a great round with his old friends from the RTE media’s team.
Wexford hurling manager Davy Fitzgerald got the nod to get into the inner circle the night before, and he played with Irish celebrities Danny O’Reilly from the Coronas and Rory Stories. Speaking to Davy before his game, he told me he was very nervous about the round as he had no time to get any practise in. He also said how surprised he was to be let into Kilkenny this week!

Mount Juliet’s Captains – Ger Dowling and Annette Hogan paired up with Golf Director Matt Sandercock and pro Robert Rock. Robert Rock was the pro who was second to Shane Lowry when he won the Irish Open as an amateur in Baltray.
Tommy Fleetwood’s team - Robert Frame (BMW), Gary Morrison, Michael Murphy - took the Pro-Am prize home on the day.
MARK POWER
Immediately after filming Rory McIIroy’s first tee off on day one of the tournament, I legged it over to the back nine to catch young Kilkenny amateur golfer Mark Power. Mark told me earlier in the week that he was hoping to do a Shane Lowry on it. Unfortunately he did not make the cut, but had a very respectable score of +1.
If Power had a little more luck on the greens, who knows what could have happened? From the 36 holes he played at Mount Juliet, he was a breath of fresh air to follow as he smiled from his first drive to his last putt. I can’t wait until this guy turns professional - he has some future ahead of him.
WINNER
The joy of Lucas Herbert’s victory on the 18th after his last putt was indescribable. With a wire-to-wire performance comes huge pressure to sustain that lead. He kept his momentum and things continued to go his way over the four days. Lucas was fun to watch, there was a lovely calmness between him and his caddy.
The 25-year-old Australian has a raw talent but his ability to continuously adjust is what earned him the DDF Irish Open title. He also thinks Kilkenny is ‘awesome’!
HIGHLIGHTS
Another talented Irish golfer to watch out is Northern Ireland’s Cormac Sharvin, who had a top 30 finish and looks forward to playing in the Scottish Open this week.
Like Power he had no luck on the greens in Mount Juliet, but he will be one to watch in Scotland this week. 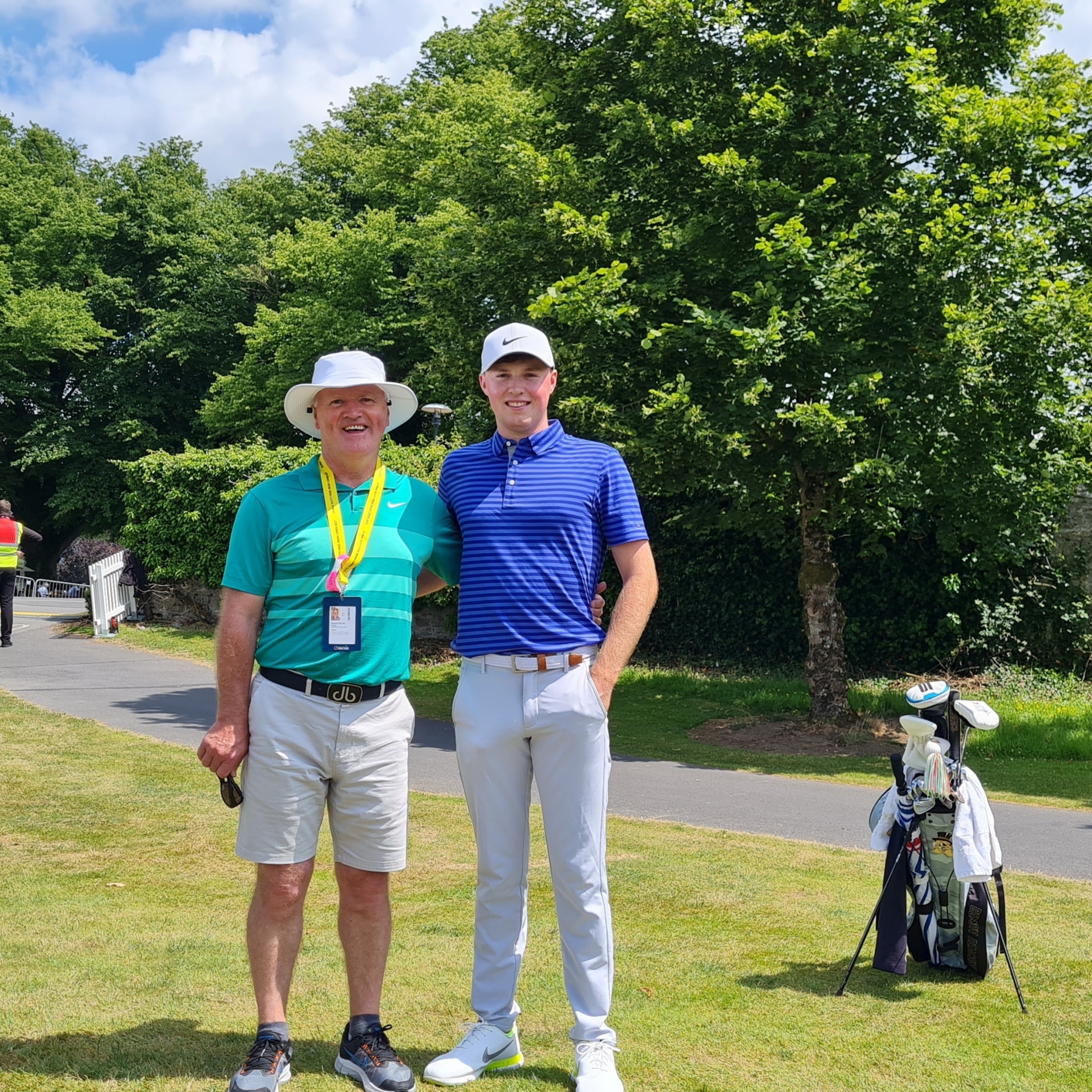 Mount Juliet was a great showcase for Kilkenny this week. The course looked incredible, the crowds were limited and even behind the mandatory masks everybody was beaming with the joy at finally attending a huge sporting event.
Speaking to Kieran Mulvey, Chair of Sport Ireland about this pilot sports event he told me how happy they were with the exceptional preparations that Mount Juliet did for the event. He said it was a very important pilot event in the calendar of outdoor sports and hopes that more events will open up to bigger numbers this summer.
Head Greenskeeper Martin Lehane was highly commended by the European Tour for the incredible standard of the course. Over 350 million people in the worldwide audience witnessed the beauty of the Kilkenny estate.
Damian Gaffney, principal of Mount Juliet, told me that he is hoping the Irish Open will return to Mount Juliet next year but there will be some stiff competition. He also praised his team for all the work they had put in to pull off such a successful event in challenging times.
Watch out for my interview next week with Brendan Lawlor from Co Louth. He made history last year for becoming the first golfer with disabilities to compete in a European Tour event and is currently number four in the world for disability golf.