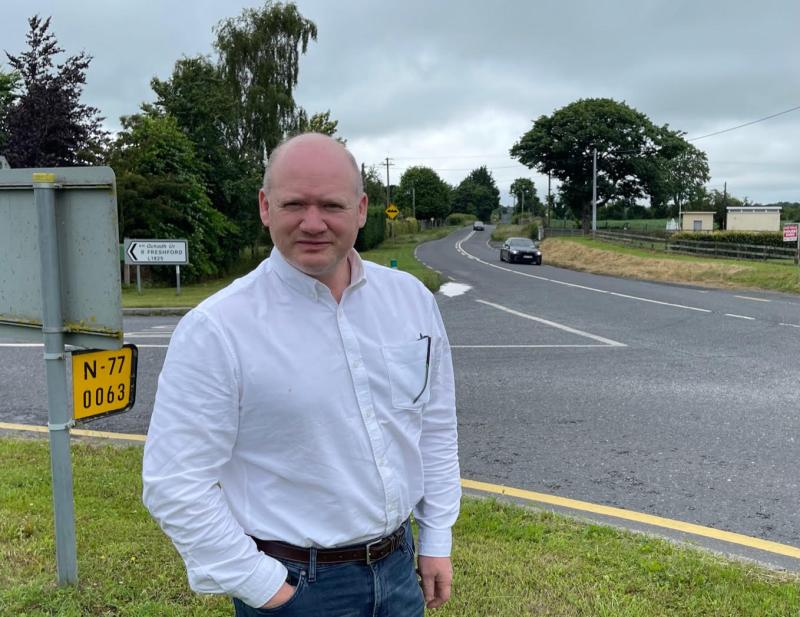 Residents along the Ballyragget road (N.77) were left scratching their heads recently as county council engineers and Transport Infrastructure Ireland (TII) officials declared that the realignment of the road from Henebrys Cross to Georges Tree is 'not a priority'.

Following questions raised by Cllr David FitzGerald, officials stated that the 6.4 kilometres of twisting and undulating road across North Kilkenny is not on their list of roads to be straightened before 2040 despite locals confirming that there have been six fatalities and over thirty accidents along this road in previous years.
Arising from statements by the TII that level of accidents didn’t justify the overhaul of the road, local resident, Paudie Brennan confirmed that he has assisted victims in multiple crashes over the years.
According to his records, five individuals have lost their lives since 1995 with a further death going back to 1972. These figures are underlined by over 30 accidents over the years with at least one incident requiring the air ambulance.
Council and TII officials have pointed out that there have been improvements to the road surface and signage along the route in recent years. Despite these modifications, the number of accidents and dangerous events have been on the increase in recent years due to increased traffic volumes and speed.

“This exceptionally twisting road does not provide any overtaking area and the undulating surface has seen many cars leave the road surface in wet and icy weather” says Cllr FitzGerald.

“By speaking with locals, I have discovered that the Council and TII road accident and incident data for this section of road is incorrect and misleading”.
As the N.77 is part of the national road network, the responsibility for funding the realignment of road falls to the TII whose decisions are based on Garda and Local Authority data.

“Clearly a significant number of accidents have not been recorded” according to Mr Brennan.

“I’ve pulled numerous cars out of ditches and come to the rescue of accident victims over the years”.

Locals have questioned the TII’s decision to spend millions on upgrading the road from Ballyragget to the Ballinaslee which passes the Glanbia plant while the road from Ballyragget to Kilkenny City section remains unaltered.
Cllr FitzGerald has submitted Mr Brennan’s accident data to the Council engineers, TII and the gardai as part of a request to reassess the Conahy section of the N.77 to seek the inclusion of this project.
With the updated data, Cllr FitzGerald is seeking funding to redesign the road and to begin discussion with landowners for any land that is needed to facilitate the realignment.