Dining out with All-Ireland champions in Kilkenny 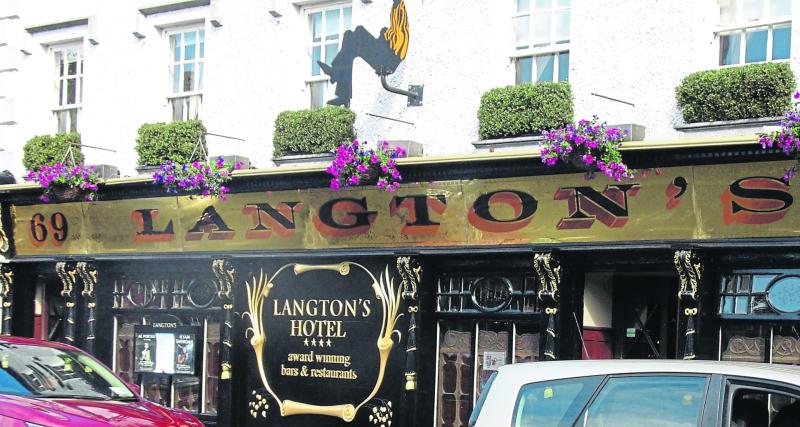 And who did I dine out with (literally) a few nights ago? An All-Ireland champion if you don’t mind.
Not a hurler by the way. And when I say All-Ireland I mean ALL of Ireland - a champion of all 32 counties.
The champion and myself were in company, good company, great company; the company of friends, good friends, great friends, and we were celebrating an upcoming birthday. A BIG birthday (mine).
We were in Langton’s, a Kilkenny landmark and now an institution in itself; Langton’s, an establishment that the six of us have been dining in for over 30 years - and then some!
And it was great to see Breda, who looked so well and who looked after us all so well all of 30 years ago, and more, and who coped with our gripes and groans (only a few) with grace and aplomb. Thank you, Breda. But I’ve digressed. One’s entitled to, I reckon, considering I’m entering senior territory. Serious, senior territory.
And so, what kind of All-Ireland champion might Gerry Moran be dining out with, hanging out with?
Or, if you prefer, what kind of All-Ireland champion might be dining out with Gerry Moran?
Okay, take three guesses. Did I hear you say Tiddlywinks? Very funny. Snooker? No. Chess? No.
To be honest you could be guessing ‘til the cows come home’ as my mother, God rest her, used say.
The sport is called Carriage Driving which, although not well known in Ireland, is a major equestrian sport especially in the UK and on the continent where it is very popular.
Best Drivers
Every year an All-Ireland Carriage Driving competition is held between the best drivers from the Republic and those from Northern Ireland.
In the case of our Kilkenny champion it was about one’s skill with a pair of horses pulling a carriage driven by a driver and his assistant. Simple as that! If only.
The competitions, which are held all over Ireland in the summer months, challenge the driver to not one, not two, but three tests: a Dressage test to demonstrate the training and movement of the horse, an Obstacle competition, involving cones, to test the speed and accuracy of the driver and a Cross-Country marathon (16km approx) involving a series of obstacles. The scores of the three tests are combined to give the overall result of the competition.
Now I knew that my friend, and All-Ireland champion, Ger Hennessy (living in Kilmanagh) was into horses as he brought me for a ‘spin’, if that’s the correct word, around Pottlerath a good few years back.
Dedicated
And so, while I knew he had a horse and carriage, or rather horses and carriages, I had no idea that he was so passionate about the sport, so dedicated to it and obviously, being an All-Ireland champion, so skilled at it.
Indeed I was gobsmacked when, during our meal in Langton’s I casually asked: “Well, what have you been up to lately?”
“A bit of Carriage Driving,” he casually replied.
“He won the All-Ireland,” our mutual friend chipped in.
“WHAT?”
That’s when I nearly fell out of my chair.
“Do you mean to say, Ger Hennessy, that we have an All-Ireland champion in our midst?”
“You have,” said the modest Ger who I literally had to cajole into letting me write about his achievement.
Ger became All-Ireland champion on July 12 above in Shanes Castle Estate in Co Antrim.
Driving his pair of Welsh Cobs, he was up against Northern Ireland champion, Robert McNeill, and went on to win the class and take the Horse Pairs All-Ireland trophy back to Kilkenny.
Although the entry was depleted by the pandemic, a total of 33 drivers competed across classes for single and pairs of ponies and horses. Indeed the 2021 All-Ireland Carriage Driving Championships were scheduled to be held in Kilkenny at the end of August on the farm of Liam and Breda Dunne at Ballymac, Cuffesgrange where they were successfully held in 2018 but due to Covid uncertainties they were rescheduled for Shanes Castle Estate in Antrim.
Oh, and the name of Ger’s assistant groom? Tracy, all the way from Cumbria.
And last, but by no means least, the names of Ger’s champion horses? Iggy and Mr Jenkins.