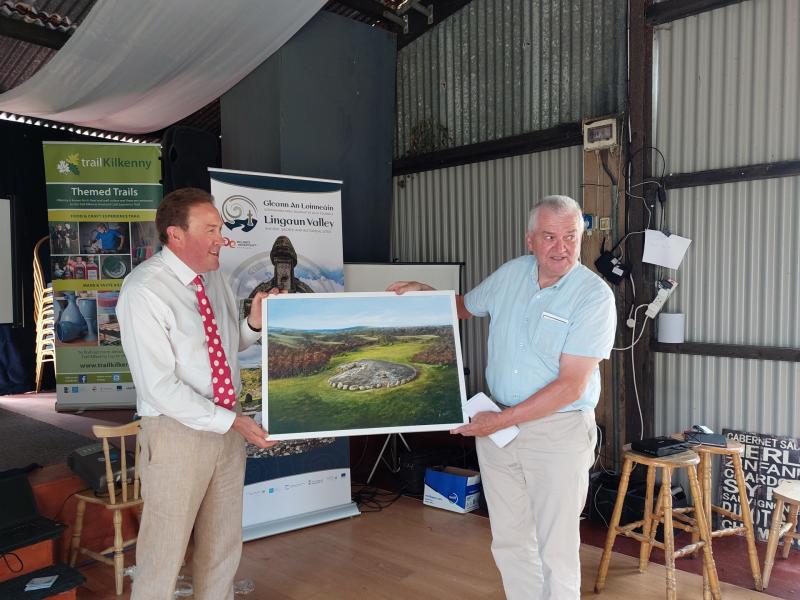 Southwest Kilkenny’s emerging tourism region has stolen a march on much larger and more established hot spots by creating a free app to allow visitors to both see the three sites as they were when first developed up to thousands of years ago.  The project, which focused on the sites at Knockroe Passage Tomb, the Kilkerian High Cross monastic complex and the Killamery High Cross and heritage cemetery, was led by Kilkenny LEADER Partnership, in cooperation with the community group Lingaun Valley Tourism and Kilkenny County Council.

“This is the first in Ireland, with even very few international examples!”  he continued,

“The Walton Institute of WIT have done a magnificent job on creating the app.  It allows any visitor with a smartphone- Apple, Samsung or Android, to see a huge amount of dynamic images of the former appearance of these internationally prestigious sites.”

“This smartphone app is the first in Ireland, with even very few international examples!”

Stephen Barnes, the project lead for the Walton Institute, (formerly TSSG) of WIT confirmed that the content of class leading smartphone app was based on rigorous research by archaeologists and recreated by specialist and experienced artists.

He stated, “The project partners decided that Augmented Reality technology, where images and information is overlaid on the real world through the smartphone camera, was a more flexible and suitable interpretation means than the better-known “virtual reality”, which requires specialist viewing visors and much more broadband capacity.  AR, by contrast just requires the visitor to download an app and run it from their smartphone.”

The guest of honour, Professor Muiris O'Sullivan, of UCD had led the archaeological research on the Knockroe site in the early 1990s.  Noting his pleasure at seeing the recently installed road signs designating the visitor’s entry to the Lingaun Valley, Professor O’Sullivan spoke of the uniqueness of the entire Lingaun region, both sides of the Kilkenny- Tipperary border, in all cultural senses.  He recounted that some of the then young students of the time who participated under his supervision in the digging, often still spoke of the charm of the region’s culture, be it music in the pubs, the beauty of the scenery or the friendliness of the people.

“I think they left a bit of their hearts here!” he admitted.  Professor O’Sullivan explained that the relatively short Lingaun River, and the mountain of Slievenamon, where its’ source sprung, probably, based on an analysis of the archaeology, formed a special and region to Neolithic people.

He explained that later in early Christian Ireland, the presence of high crosses was a ready indicator of the site being a monastic settlement.  He praised the AR app initiative, stating, that having being informed today of its many functions, he realised he had only really, “Started the tractor engine” on its capabilities.

Frank Walsh, the Chairperson of the Lingaun Valley Tourism group, commended the development of the app as an important addition to the interpretation of the many heritage sites in the Lingaun region.  He also praised the efforts of the community in maintaining and developing the sites on a voluntary basis.  Mr Walsh, who with his wife Ade operates the (soon to reopen) Kilkerian Cottage Restaurant, also appealed for funders to understand the pressures on communities and change their funding rules to accommodate the lack of finances of the typical voluntary group which all agencies and statutory groups relied upon to lead projects.

Councillor Fidelis Doherty, the Chairperson of Kilkenny County Council spoke to praise the initiative and its partners.  She gave particular credit to the work of the County Council on constructing the new entrance road to the Knockroe site, its support of other community tourism initiatives and cooperation with KLP.

Declan Rice presented the original oil paintings of the artist Bettina Norton of the three individual sites used in the app’s artwork, to Professor O’Sullivan, Frank Walsh and Councillor Doherty.  He confirmed the app would be free to download and was available on the Apple store and the equivalent on other smartphone makes.  He also stated that KLP had plans to expand the app to additional sites, both within the Lingaun Valley and elsewhere in the region.