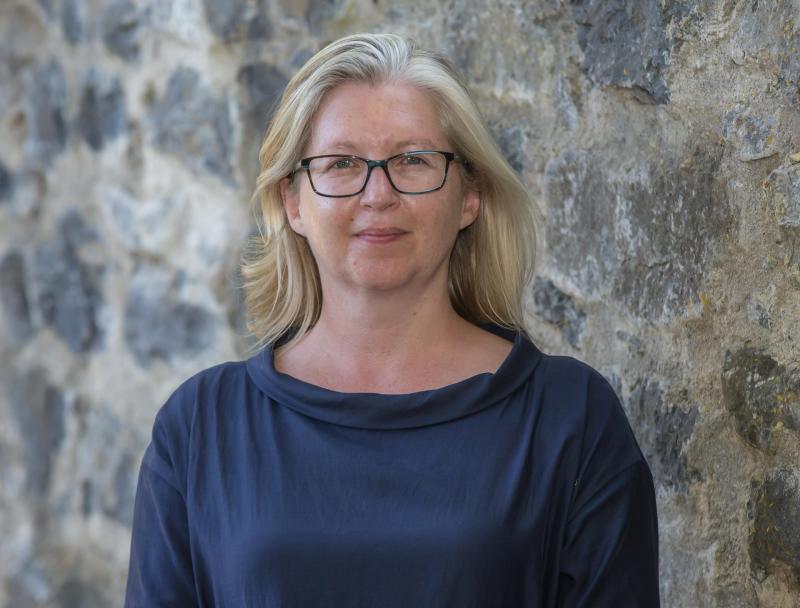 Olga Barry is the Director of Kilkenny Arts Festival (KAF). The Festival runs from August 5 to 15, 2021.

Having read music at University College Cork, Olga embarked on her arts career like most, as a freelance arts worker in a variety of roles. In 2010 she take up the position of manager of the RTÉ Concert Orchestra where she produced over 400 events.

As a Cork woman you are very committed to Kilkenny.
I am — sure who couldn’t fall in love with Kilkenny? I started working with the Kilkenny Arts Festival as its producer in 2014. I usually spend three years in a job before I want to do something else, so nobody is more surprised than me that I am here eight years later!
It’s a great city and a great community. Pandemic years aside I really love building a festival in Kilkenny. It has always been the ideal festival city.

You still produced an Arts Festival during a pandemic. That was very brave of you.
It was and I was very concerned would people think we were indulging in a bit of hubris, but we felt it was really important for Kilkenny City to have the oldest multi-disciplinary festival in Ireland.
You can see how the whole festival ecology from Kilkenny throughout the year with all the festivals we host. I think the reason people like coming to Kilkenny at any part of the year is that you can bank on something really groovy happening in the city, as well as all the fantastic things happening around the county.
It’s made Kilkenny a sure bet for Irish and international visitors, there’s always a vibe no matter what time of year you land here.
I felt like Kilkenny needed to show her resilience, in terms of the arts in particular. We always knew when we were building a festival during the pandemic that it could be pulled away at any moment.
We were the first people to open a theatre and to successfully stage a new production of theatre since the beginning of the pandemic. Hats off to the Watergate Theatre, they backed us all the way.
The Irish Chamber Orchestra played in the Castle Yard on the closing day last summer. It was the first time an audience attended a live orchestral concert outdoors and the rain held off!
All of these things are symbolic and important. Kilkenny will still be here, she has had lots of crises over the years, between hurricanes, Foot and Mouth, and the biggest one being this pandemic. We will survive and that’s the feeling we had going into last year’s festival, as well as being brave within the guidelines to ensure Kilkenny still had a presence.
We didn’t want to be just another iPhone on the kitchen table. We took steps to add value artistically and still show people the strength of Kilkenny so that they felt connected with the city.

We all want some form of entertainment back but how are numbers restricted this year for audiences?
We would have hoped things would have improved more than they have. There was the hope that live music indoors would progress but we are operating in the same guidelines that were established in July.
In a formal theatre setting you can progress as long as you can make your production Covid compliant. Attendances of 50 are allowed, maintaining social distancing throughout.
People who would have come to the Watergate last year know how well we and the Watergate did this. Your group will be more than two metres apart from the group in front, behind and beside you at each side. You will be assigned your seats and accompanied at a distance indoors.
The Watergate has fantastic ventilation system, doors will be left open and masks must be worn at all times. The feedback we got from the audience last year was that they felt so safe and looked after in the Watergate.
With outdoors performance we are still obliged to maintain two metres distancing. If you are sitting at a formal production, your mask will be on, you will be assigned your seating and hopefully the rain won’t scupper our plans!

You’ve kind of made the festival ‘bomb proof’!
Famous last words! It’s as ‘bomb proof’ as we can make it but we were very disappointed not to be able to run a series in St Canice’s Cathedral this year. It’s almost like the lungs of the festival programme. The cathedral sits there so proudly on that hill and a wonderful welcoming community there.
People have listened to the most glorious music there, from 15th Century offerings through to contemporary rock and indie acts for 47 years. It’s heartbreaking that we can’t bring people into it because we are not allowed within the guidelines.
Instead, we are going to film the Irish Chamber Orchestra performing in the cathedral during the festival, which will be available online. We are going to charge for this because it is a very big production and an impressive body of work from six young composers with a stunning West Kerry singer Muireann Nic Amhlaoibh.
We know by recording that work this music will have a lifetime beyond us and allow those artists to have a great new project under their belt for international touring.

There are lots of new productions made just for Kilkenny. Not alone is it a win for the artists but it’s also a win for us in Kilkenny.
You are absolutely right, there’s something about things that you probably wouldn’t normally be able to do, unless there was a pandemic. We have to keep things moving and have people in and out of events quicker.
Like this is the first production of Elektra ever made in Ireland and guess what, it’s outdoors in Kilkenny! People don’t think of outdoor opera in that way and certainly not on that scale.
KAF always used outdoor spaces in the past around the city. Is there anywhere new this year?
There is because the whole new centre of Kilkenny is now stretching. I love that new river walk, the Abbey Quarter and the new skatepark. It’s a very contemporary space and I think it’s great to see girls and teenage girls with their boards using it.
It was designed by skateboarders and we don’t want to interfere with that, but we want to respond to it in some way. There will be a multimedia interaction projection and audio show that will feature the noise of the skateboarders. So with your headphones on you will hear a specially commissioned piece of music for the skatepark.
Also Peter Power’s The City Is Never Finished is not to be missed if you are a Kilkenny citizen. It’s a journey of exploration at St Francis Abbey in The Abbey Quarter.
The two formal staged outdoor shows will be a roar laughing show from our theatre partners Rough Magic in the grounds of Kieran’s College. While also having a very intense, almost violent opera Elektra in the Castle Yard.

Where can we get tickets?
Tickets are limited and selling very well, so don’t leave it to the last minute! All tickets will be sold online and ring our box office on 056-7752175.
However, read the restrictions. If you are feeling unwell, just return the tickets and you get a refund. Listen to the public health advice, we must still look after our neighbours, our communities and our families. We are not through it yet, but we have made all these restrictions work. I know the Kilkenny audience will do everything that will be asked of them, as they were so wonderful last year.