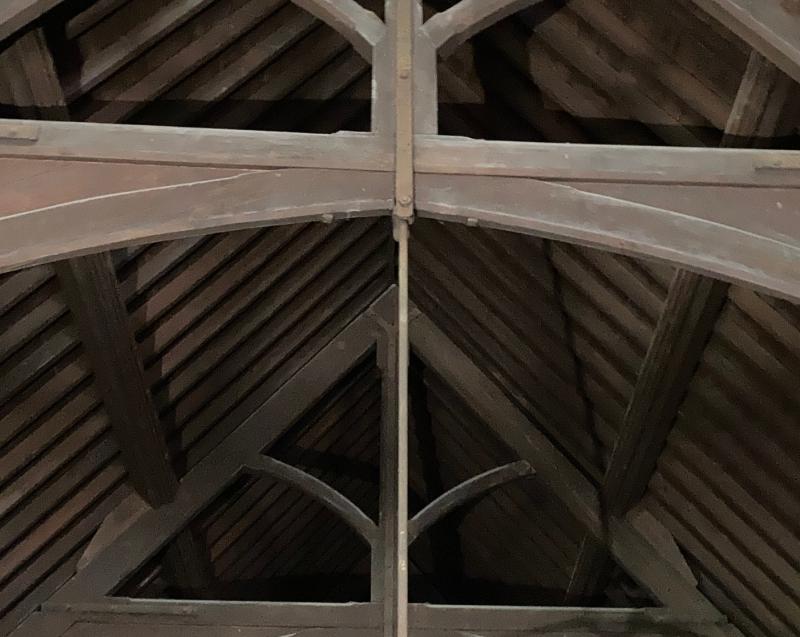 A new You Tube video entitled ‘Tullahought Church - Inside Out and Upside Down’ explores St Nicholas Church and its history.

It has been produced by Tullahought Tidy Towns for Heritage Week and can be seen on the National Heritage Week website and the Tullahought Tidy Towns, Facebook, Twitter and website pages.
HIDDEN GEM
The Inside Out & Upside Down video has revealed a hidden gem of construction craftwork that had disappeared from public view over 50 years ago, Set in a panoramic landscape, the church is the third known in line, with the first being recorded in 1346. Even though it was a long time ago, it was still over 3,000 years after the construction of the burial tombs at the Coshel in Knockroe and on the top of Baunfree, Kilmacoliver Hill.

The video of the present church opened in 1885 includes historical clips and shows the underground crypt and the ornate stain glass windows. Also the most remembered part that was the internal high pitched wooden roof that fell foul and disappeared to the modernisation phase that followed the second Vatican Council. With the exterior of the church being almost untouched for 90 years, the only alterations were the removal of the belfry that sat atop its western gable, work on the windows and the addition of twelve cut limestone buttresses to support the roof.

After Vatican II concluded in Rome in 1965, many liturgical and structural changes were implemented worldwide and the local church became part of a three point Diocesan plan in the village. The first part was to knock the two roomed school building across the road that is now the areas community centre. It was then to be replaced on the vacant site, with a wooden church.

The final part was to be the knocking of the existing church to provide a car park.

After the plans were revealed, the local community cried halt to the destruction of the imposing structure that was built almost within living memory, to cater for the increasing slate cutting community in the Slatequarries and Ahenny. Following negotiations with Fr. Garret Phelan PP in 1972, concessions were accepted on a complete internal refit.

With them the roof was lowered and the timberwork hidden, out went the ornate wooden altar rails and the high altar and steps on the Western Gable where the priest said Mass with his back to the people. Above the beloved circular stain glass window that bathed the church with beams of soft coloured evening light went away to Wexford and the two stain glass windows on the front gable were hidden away. Also falling to the builders sledge was the attached sacristy that gave access from the rear of the church to the altar and the glass roofed conservatory style waiting room that also catered for the sutan and surpliced altar boys on Mass days.

As it fell, it filled the underground basement that had served as a place of refuge for the pursued in the country’s more troubled times. Out too went the combined public and choir gallery that sat above the beautiful ten foot high wooden stain glass panelled entrance porch. Internally the church was denuded of all the statutes of the popular saints, the wooden confessional boxes and alcoves and the tall confraternity poles that occasionally lined the aisle. Today the church sits on a concrete car parking slab following the removal of the yew trees that also lined the graveyard and the wrought iron railings that created the gravel lined privet and boxwood hedge paths to the church, the sacristy and the coach house that hosted the priest’s horse and trap.

Nowadays a popular compact venue for all of the Church celebrations the Covid limited attendance at the 9.30am Sunday morning Mass is often surpassed by those standing and seated in the car park and along the roadside as they listen to the words of an tAthair Fearghail O’Fearghaill PP on the outdoor speaker.

The video filmed and narrated by the father and daughter team of Richard and Clare Walsh involves the community members in period dress with the backround music being provided by the church organist John Delaney. Thanks to the teams initiative the history and heritage of their

Teach an Phobail and its hidden gems has been recorded for future generations. For many now gone and still living it is hoped that a major lottery windfall would help restore the internal wooden roof to public view.