Trojan efforts by committee to protect church and graveyard at Castleinch 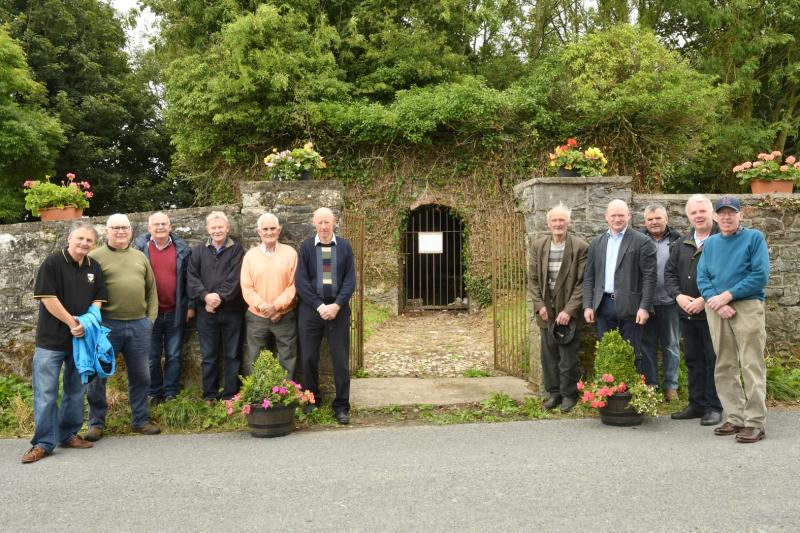 A few miles outside Kilkenny City, on a sharp bend, there is a church and graveyard steeped in a rich and long history dating back to the 1600s.
Up until recently ivy and foliage and high grass almost concealed its existence and the graveyard had become overgrown.
Local man Richard Ryan decided earlier this year to see if people were interested in forming a group to maintain and care for the graveyard.
“I thought it was a pity it wasn’t being looked after,” he said. “I saw one of the monuments and there was a piece missing and I said ‘isn’t this awful’. I thought in time someone will come along and say why was that allowed to happen.
“Two or three days after I had a chat with a few of the neighbours and everyone was on board to help out,” he continued. “There is great enthusiasm and at our initial meeting members of over 20 households showed up.”
St David’s Church and graveyard at Castleinch is the final resting place for a number of prominent Kilkenny families over the centuries and contains the tombs of the Earls of Desert along with a tablet to the memory of a member of the Cuffe family. It has graves belonging to both Catholic and Protestant families. Sir John Blunden of Castle Blunden is interred here, as are members of the merchant family, the Morrisseys from Friary Street.
It is abundantly clear that the local community cares deeply for this historic and sacred space and in recent months they have met up every Wednesday evening to carefully tend to the graveyard. It is undoubtedly a team effort and slowly the church and graveyard are becoming more visible as the foliage that grew wild for decades is gently pulled and cut away.
Dr Richard Hyland has written a paper on the history of the church and graveyard which was published in the Old Kilkenny Review in 2015.
The author explains that the townsland of Castleinch is also known as Inchyologhan and that according to writings from the beginning of the 20th Century the old Catholic parish church of Inchyologhan was taken down to the ground more than two centuries ago, and a Protestant church was erected at the same time in its place.
The church also has a link with John Kearney, a distant relative of the former US president, Barack Obama, who served as rector of Castleinch Church.
There are also graves dating back to the more recent past and the Morrissey family plot tends its own story with beautifully penned words carved on the stone describing the peace and serenity that can be found in this special place.
“My great grandfather came out here walking dogs,” said Ian Morrissey who continues on his family’s merchant tradition with his grocery store on the corner of Friary Street. “He loved nature and he loved this place.”
There is a wealth of local knowledge and pride of place in the people who are giving of their time to protect centuries of history.
Phil Delahunty, who was the captain of St Finbarr’s hurling team in the 1950s explains that the graveyard was originally built on Delahunty land.
Cllr David Fitzgerald has also been involved in this wonderful community initiative and is full of praise for all involved.
“I’m delighted to work with the newly former Castleinch Graveyard restoration committee to conserve the chapel and monuments for future generations,” he said. “Great credit is due to chair, Richard Ryan and all the local volunteers who have worked throughout the summer to clear this historically important graveyard.”