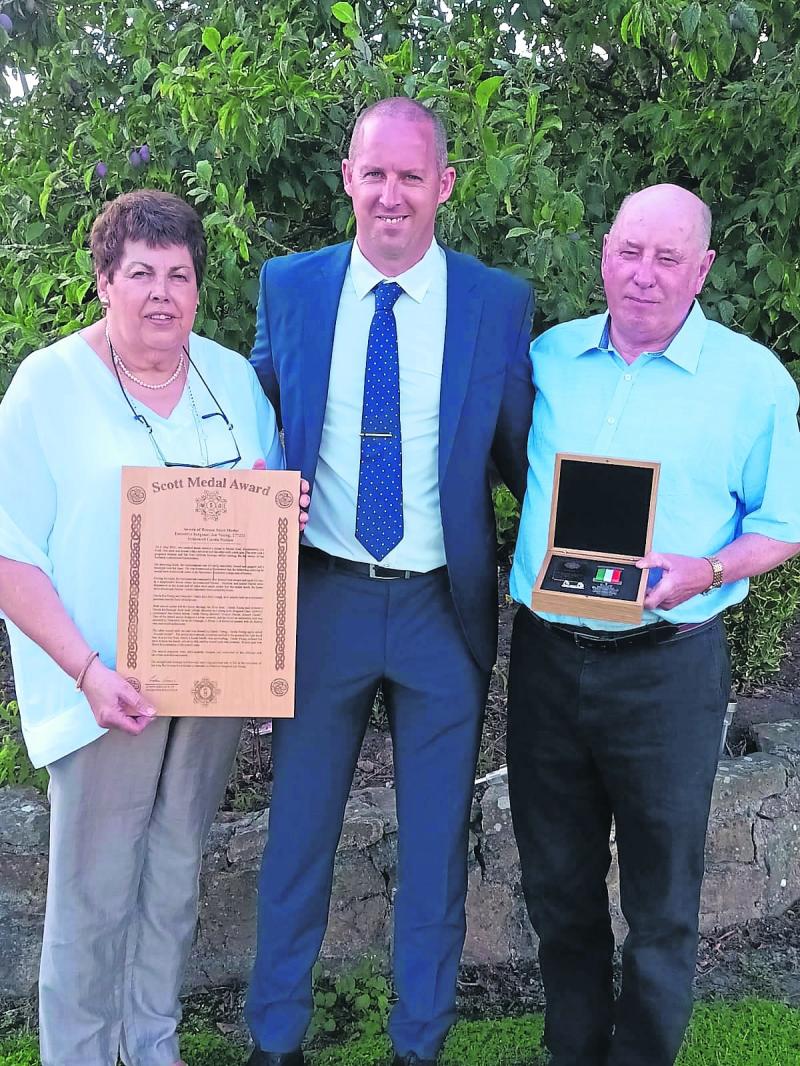 A detective sergeant from Kilkenny who risked his life when he tackled an armed raider during a hostage incident has been awarded a Scott medal for bravery.

The prestigious accolade was bestowed on the Kilmanagh native, who is now stationed at the Bridewell Garda Station in Cork, at a special ceremony at Dublin Castle last week.

Speaking at Dublin Castle, Garda Commissioner, Drew Harris explained that the Scott Medal is the highest decoration that can be bestowed upon a member of An Garda Síochána for their exceptional courage and bravery.

In total 13 gardaí received the award and Commissioner Harris commended them for 'their bravery and heroism in service'.

"While the precise circumstances and events which have led to each one of the awards vary, the work of all those recognised  is equally rooted in local communities. These gardaí performed their duties with extraordinary commitment to the communities they serve. Above all, they set aside all fear and consciously put the safety of others before their own in a moment of danger or threat," he added.

Det Sgt Young, who is from Corstown in Kilmanagh, and is the son of Ann and John Young received the award for an incident that happened in Cork in 2005 when two masked males entered a house on the outskirts of Cork City armed with a revolver and a stun gun.

The men took a pregnant woman and her four children hostage whilst waiting for the return of her husband, a prominent businessman. On returning home, the businessman was violently assaulted, bound and gagged and a hood put over his head. He was threatened and informed that the following morning he would have to take both males to his business to hand over a large sum of money.
During the night, the businessman managed to free himself and escape and made his way to a neighbour’s house where he contacted gardaí. Uniform and armed Gardaí were dispatched to the scene and all units were made aware that the males inside the house were armed and violent.
Gardaí discreetly surrounded the house. Garda Joe Young, who was armed, took up a concealed position near the front of the house. Both armed males left the house through the front door. Garda Young, along with a number of gardaí,  drew his official firearms and confronted the armed males. Garda Young shouted “Armed Gardaí, Armed Gardaí”. One of the armed males
dropped a silver revolver and lay down as instructed, and was arrested. A Silver Colt Revolver loaded with six bullets was recovered at the scene.
The other armed male ran and was chased by Garda Young. Garda Young again called “Armed Gardaí”. The armed male turned, stumbled and fell to the ground; his right hand was in a pocket from which a black handle was protruding. Garda Young ordered the male to raise his hands, which he did, and the armed male was arrested. A ‘stun-gun’ was found in possession of the armed male.
The armed suspects were subsequently charged and convicted of the offences and received custodial sentences.