Kilkenny writer on losing a famous friend in the 9/11 attacks, and her own close call 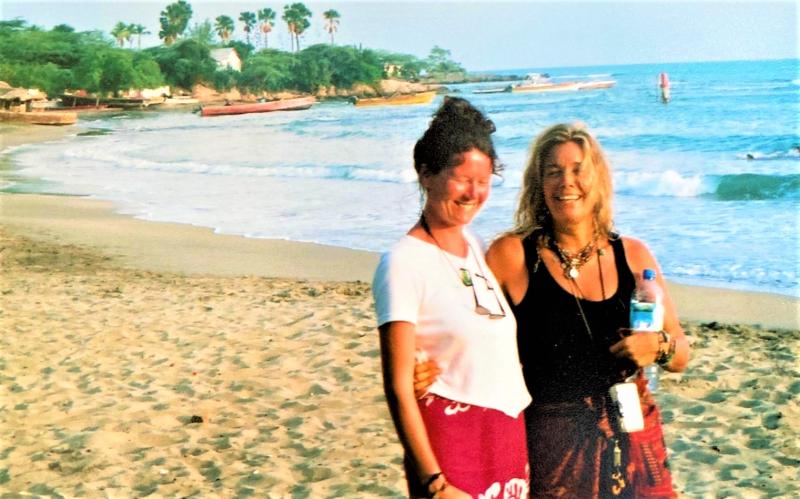 Cathy Hogan with Berry Berenson on Treasure Beach, Jamaica in 2001

After two years living in New Zealand, in the summer of 2001, I returned to Ireland. But I was taking the long way 'round. First, I stopped in New York to visit two of my brothers, Jack and Eamonn. And then I went to Jamaica for a month, fulfilling a dream to travel to a country that had long held a fascination for me, in both musical and historical terms.

I flew into Kingston, and after a few full-on days, I escaped to Treasure Beach – a quiet fishing village, where I could really began unwinding.

Within hours of arriving I met a middle-aged American lady, called Berry. She had been living there for six years with her local partner, Coot. We became instant friends and Berry invited me to her home every morning. She taught me yoga, and after a swim we would find somewhere cool where we would write and chat.

Berry told me about her late husband, Tony, and their wonderful but challenging life together: Tony had hidden his homosexuality from her and their children until he got Aids, and he died a few years later. My own recent marriage break-up didn´t compare.

Berry and I made plans to meet again in New York that September to begin working and travelling together. She had been a professional photographer back in Hollywood, and she was writing her autobiography. I had begun my own mother´s memoirs, so I was thrilled at the prospect of returning to the States to help out, and learn what I could from her.

High on my list of countries to travel to was India. Berry handed me the novel, ´A Fine Balance´ by Rohinton Mistry. If I still wanted to visit the country after reading it, she said, then we would go.

On my final night in Treasure Beach, Typhoon Barry made its imminent arrival felt, as Berry and I took shelter and watched TV. A movie with Anthony Perkins came on, and I said how much I admired him as an actor, as well as finding him sexy. Berry said: ‘Thanks, Tony would be happy to hear that.’

And that was when it clicked – Berry was his widow. I recalled how the locals always spoke of her sweetness and boundless generosity, and of how they had grown to love this ‘famous Hollywood person’ in their fiercely close-knit community.

It was August when I got home to Kilkenny, and I picked up some festival work. I wrote to Berry that life was busy, but that, when my job finished, I looked forward to meeting again and travelling with her.

Like much of the world, I watched in numbed horror when the 9/11 attacks on the Twin Towers happened. My mother and I frantically tried to reach Jack and Eamonn in New York, but after failing to make contact, we began a trance-like waiting game. For four hours, we answered calls from my other siblings and acted out the roles of calm contact for the clan.

Eventually Jack phoned to say that he and Eamonn had been working in downtown New York that day, but that they were safe and well. Although, they were anxious for their Irish friends who worked in construction in and around the World Trade Centre.

For my family, the worst was over. Selfishly, my relief shadowed my interest in the horror story. Yet I felt compelled to watch the news, not understanding why. It gave me nightmares for weeks after.

When the shock subsided, I wrote to Berry saying that I was now free to travel again, and that I hoped she hadn’t known anyone involved in the September eleventh disasters. I got no reply.

The following summer I was talking on-air to Dave Fanning about famous people that listeners to the radio show had met. Through my festival work, I ran into lots of well-known people. Then I mentioned how I´d met Anthony Perkin’s widow. Dave, being a film critic, was particularly interested in this movie icon’s connection.

After our chat, a programme researcher phoned me back: a listener had called the station to inform us that Berry had been on the first plane to hit the Twin Towers. I froze to the spot, my mind erupting in confusion, sorrow, and then anger. I thought everyone I loved had escaped the attacks.

And remembering the plans we´d made, it struck me that I could have been sharing that flight with Berry. I felt ill.

Soon after, I returned to New Zealand, where I attended the first anniversary of nine-eleven. The memorial listed the nearly three thousand victims, and it was only when I saw Berry Berenson´s name that I really believed my friend was dead.

To have briefly known and then lost such a special person served only to encourage me to experience as much of life as possible.

Two years later, I sat on a rock at the edge of India’s coast, watching the sunset after a yoga session. As I shed tears into the Arabian Sea, I told Berry that she had made it to India inside my heart.