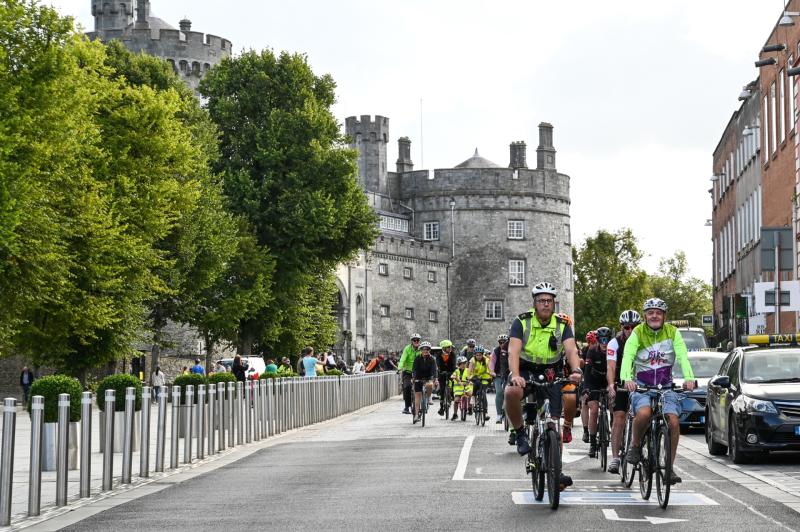 The Marble City will not win back its Tidy Towns crown until High Street is pedestrianised, according to the Chairman of Keep Kilkenny Beautiful, Pat Boyd.
Mr Boyd has written to the members of Kilkenny County Council urging them to support the pedestrianisation of Kilkenny’s main thoroughfare.
Sheer Volume
After participating in an organised city cycle, which was part of Bikeweek last Sunday, Mr Boyd said he was ‘overcome by the sheer volume of vehicular traffic in the city centre’.
The chairman of KKB, which is Kilkenny’s Tidy Towns organisation, pointed out that it can be ‘difficult or impossible for cyclists and uncomfortable for pedestrians even within the new one way system’.
“In the 2019 Tidy Towns Report which effectively states that: Kilkenny will not progress in the Tidy Towns competition unless we bite the bullet and at least consider pedestrianising the city’s main artery and remove vehicular traffic from the city centre which detracts hugely from the enjoyment of the city’s environment.
“I don’t think that we will win an award until we can respond to the recommendation in the report,” he said.

The KKB chair also commended the local authority on recent works completed in the city including the one-way system in place on RoseInn Street and High Street, the pedestrianisation of lower James Street and the creation of new public outdoor dining spaces.
“Kilkenny County Council is making tremendous progress introducing measures to address the biodiversity emergency tree planting and other areas concerning climate change and sustainability. It would be a shame if Kilkenny can not progress in the National Tidy Towns Competition because of the perceived bias against pedestrians and would be cyclists in our beautiful city,” he added.
The 2019 Tidy Towns report also refers to the ‘omnipresence of moving and parked cars throughout the city’. The report also states that it seemed that the only places free of cars were ‘St. Kieran’s Street/stepped alleyways/ or (very few) lanes’.
“This detracts hugely from the enjoyment of the built environment/streetscape, from the Medieval Mile and indeed from the enjoyment of the entire city. Because of the huge numbers of tourists - including tour groups - concentrated on the city centre footpaths - the entire impression of vehicles and humans is one of ‘moving clutter’. Perhaps your citizens and public representatives would ‘bite the bullet’ and consider pedestrianising at least the main artery - such has been done in some other cities and large towns of similar size throughout this country?,”concluded the adjucator.
Mayor of Kilkenny, Cllr Andrew McGuiness said that there is ‘a lot of merit’ to the suggestion to pedestrianise High Street and added that it is ‘worth exploring’.
“Enhancing our outdoor spaces and improving the shopping and visiting experience in Kilkenny should always be a goal, however, whatever decisions are made regarding the future of High Street must be done in consultation with all of the local businesses and the general public,” he said.
Meanwhile Cllr Maria Dollard said that less traffic is ‘undoubtedly a good thing’ and there would be different perspectives on the pedestrianisation of any street: “From a personal point of view, as an advocate for disability voices, older people, families of young children and the shift towards encouraging cycling and walking as a mode of transport, I think that less motor traffic is undoubtedly a good thing,” she said.
“Cleaner air, less noise pollution, safer streets means more shoppers enticed into the city centre and a bigger spend. How we do it is the question. The key to finding the best way is always quality public consultation. We have the solutions to our own challenges. We need that facilitated dialogue and to draw from the experience of other similar size towns or cities.”