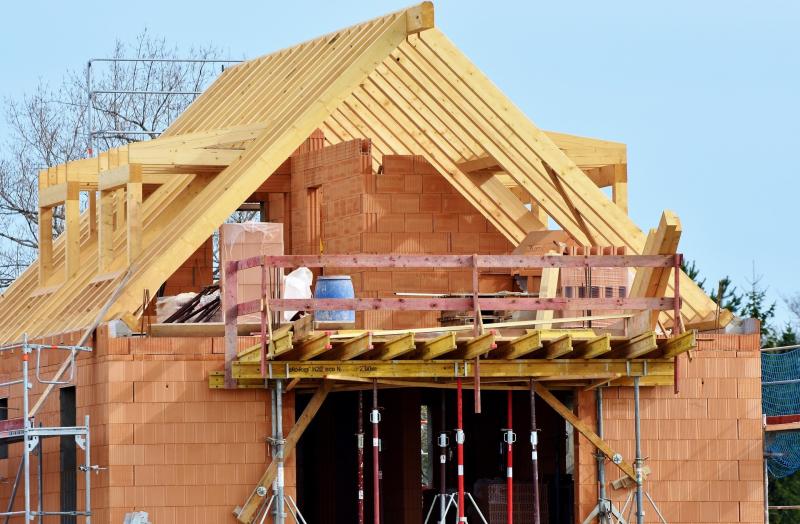 Construction was booming in Kilkenny in 1971 PICTURE: Capri23auto/Pixabay

Here's what made the front page of the Kilkenny People on October 8, 1971 - 50 years ago this week

Over 250 houses and cottages are either being built or planned by Kilkenny Co Council at present. Approximately 50 have been completed in recent months. And sites have been acquired or are being negotiated for in nine county areas for further schemes.
This was the happy news given to a special housing meeting of Kilkenny County Council on Monday.
The biggest scheme is the proposed erection of 100 houses at Newpark, Kilkenny.
Monday’s meeting was told that on the advice of the Council’s consulting architect and the Co Engineer a low type cost house (approx 10 per cent cheaper than normal) had been accepted and agreed to by the Department of Local Government for the Newpark scheme.
Thirty similar type of houses are to be built in Graignamanagh.
Houses under construction at present are - 24 in Bennettsbridge which are almost complete; 20 in Castlecomer, scheduled to be completed at the end of March next year; 12 at Thomastown which have just been started as part of an 18 house extension; three at Callan which are nearing completion; and six at Kilcreene which are prototype houses and are now well advanced.
Rural cottages are being built in Uskerty, Coon, Kyle, Shankill, Rathcash, Busherstown, Jamestown, Robinstown and Hoodsgrove.
Up to the end of March this year, the Council had provided 27 chalets and three mobile homes for elderly people. And since then, a further seven chalets and three mobile homes have been provided.
Since March also, 10 houses have been provided in Mullinavat; 14 in Thomastown and three in Callan. Four rural cottages have also been built.
The following plans for the future have already been made:
Gowran: A layout for 14 houses has been prepared and accepted by the Department of Local Government.
Freshford: A scheme of 24 houses has been advertised for tender. Two house types are involved.
Johnstown: A site for four houses at Johnstown has been surveyed. The Council is awaiting a submission from a contractor for the erection of the houses.
The following is the situation for the acquisition of land for future housing schemes:
Goresbridge - A fully serviced three acre site has been acquired.
Bennettsbridge - The existing site will accommodate eight more houses.
Mooncoin - Negotiations are in progress for the acquisition of a site.
Castlecomer - The existing site will accommodate 40 more houses.
Ballyragget - The site on which the original houses were erected will accommodate further houses.
Mullinavat - The acquisition of a site for further houses is being negotiated.
Stoneyford - Land is now available for a housing scheme.
Callan - The acquisition of a site for further houses is being negotiated.

OVERJOYED KILKENNYMAN
An overjoyed Kilkennyman, Mr Eamonn Ó Faolain, Wyattville, Killiney, Co Dublin, was celebrating this week after winning £26,000 in the Irish Sweeps, Cambridgeshire, when the 10/1 chance King Midas coasted to victory in an exciting finish on Saturday.
Mr Ó Faolain, who is editor of Dail Debates, was formerly a journalist with the Kilkenny People. He sold a half share of his ticket to Dublin bookmaker Terry Rogers for £1,600 before the race.
He is author of An Lann Toledo, an historical romance in Irish. His first purchase will be a new house for his daughter, Maeve, who plans to get married shortly. Mr Ó Faolain watched the race on television.
Other Kilkenny people to share in the luck of the Cambridgeshire draw were Mr George Frisby, Acres, Mullinavat, his wife Josie, a daughter and Mrs James Frisby, Lismatigue, a daughter-in-law. They won £375 when their horse, Richboy, finished fourth.

BORRIS MAN SHOT IN BELFAST
A Borris man has been shot dead in a gun battle in Belfast. He is Patrick Daly, formerly of Cournellan.
Mr Daly, who was 57, was visiting friends in the Linden Street area of Belfast on Sunday when he was caught in crossfire while a military patrol was searching houses.
Mr Daly, who lived at Green Acres, Lurgan Road, Moire, Co Armagh, had been on temporary duty in Belfast as an inspector for the Ministry for Agriculture. He is survived by his wife and family in Moire, and his mother and brother in Cournellan, Borris.