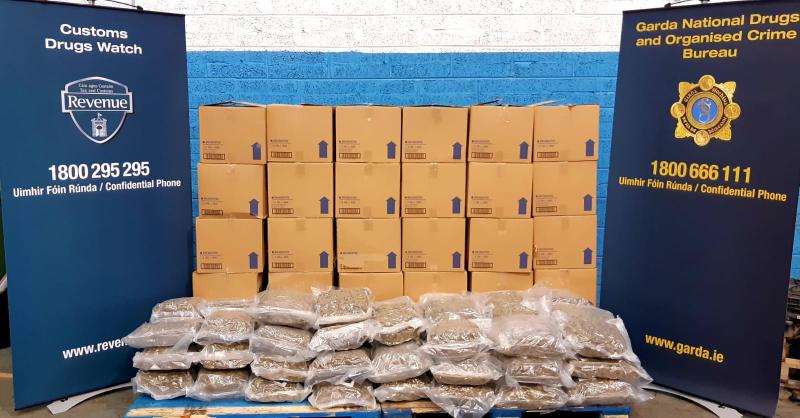 The cannabis seized in Kilkenny yesterday

Two men are in custody after a major drug seizure by gardaí and Revenue in Kilkenny, as part of an investigation into an organised crime group in the Kilkenny area.

Cannabis with an estimated street value of €1,180,000 (€1.18 million) was seized by Revenue Officers as part of the operation.

The drugs seized in Kilkenny

As part of ongoing investigations targeting persons suspected to be involved in an organised crime group operating in the Kilkenny area, a joint operation was conducted by personnel attached to the Revenue Customs Service and the Garda National Drugs & Organised Crime Bureau (GNDOCB) yesterday. During the course of this operation 59kgs of cannabis was seized.

Gardaí arrested a man aged in his 20s at the scene and he is presently detained at Kilkenny Garda Station.

A vehicle was subsequently intercepted in the Kilkenny area and Gardaí arrested a man aged in his 40s. He is also detained at Kilkenny Garda Station. Both men are detained pursuant to Section 2 of the Criminal Justice (Drug Trafficking) Act 1996.

The seizure was made as a result of a joint operation conducted by Revenue’s Customs Service and the Garda National Drugs & Organised Crime Bureau (GNDOCB).

This operation was part of Revenue’s ongoing joint investigations targeting organised crime groups and the importation, sale and supply of illegal drugs. If businesses, or members of the public, have any information regarding drug smuggling, they can contact Revenue in confidence on Confidential Phone Number 1800 295 295.