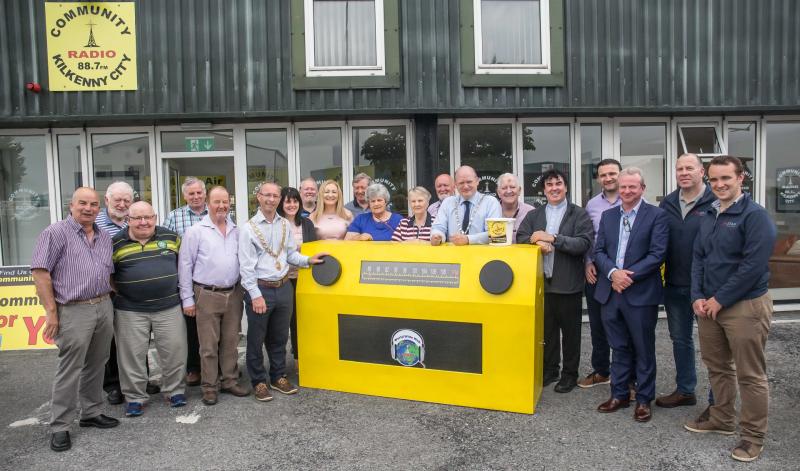 Pictured in 2018: A crowd attends the unveiling of a plaque at the Community Radio Kilkenny City Station last week, to mark Kilkenny County Council’s support for the upgrade of the building

It took some time, but the annual meeting of Community Radio Kilkenny City was held post-pandemic recently.

Chairman Michael Walshe was bubbling with good vibes as he welcomed volunteers and shareholders to the St Canice’s Neighbourhood Hall on Butts Green.

He opened the meeting on a sad note, respectfully remembering colleagues and relatives of colleagues who had gone to their eternal reward since last the Radio had convened at their last meeting. He referenced in particular Marian Doyle, wife of fellow Board member Pat Doyle, who had passed some seven days previously. The talented Ray Nolan was remembered also.

“We remember Ray and Marian,” he said. “We also remember past volunteers, and Board members who made an enormous contribution towards getting our Radio to the iconic regard, and respect it now holds among our very own Kilkenny people.”

A minute’s silence was observed in tribute to all.

It was not an easy task for the Chairman to consolidate the affairs of the Radio in 2019 with what developed in 2020 because of the obvious problems posed by the Covid-19 pandemic.

Dealing with the issues coronavirus presented over the past two years or so, Chairman Walshe informed the meeting that CRKC had survived and stayed broadcasting over 97 hours per week, often with only three people in the building.
He said than from the get-go, protocols were established and respected to protect everybody in the building at all times.

Allowances were made for some presenters whose knowledge and expertise enabled them to produce their programmes from their own homes.

Interaction by telephone contact and messaging were of paramount importance in the overall context between presenters and the studio, and between the studio and its listenership – groups and individuals. Community Radio Kilkenny City gave a voice to over 340 individual groups, and over 7,000 individuals.

Dedication
“All of that could not have been accomplished without the dedication, co-operation and adaptability of the staff,” he said. It was patently obvious by all that his acclamation was cloaked with a prideful sincerity. In brief, here was a chairman who was very proud of what his team had endured and delivered.

Mr Walshe indulged the patience of the assembled audience by taking them on a trip through some of the technical ongoing within the radio station.

“Our new studio is practically finalised, and will be on stream in the very near future,” he said, promising that training and support will be provided to all.

He thanked the many sources from whence financial support was provided. He was particularly mindful of St Canice’s Credit Union, and the Kilkenny Leader Partnership, whose support was very significant.
He was mindful too of the support of the support afforded by the Radio’s retailers and the fundraising efforts of others.
Michael was particularly proud of the on-air achievements of its presenters.

“I am very proud that so many of our presenters have garnered National Awards for their excellent work,” he said. “Liam Langrelle, our Spirit Alive programme, the Big Jump team, Mick Cummins; the Garda Award for Thomas Morris – they did our Radio proud,” he enthused. “We went out to meet our own Kilkenny people with our Outside Broadcast Unit to numerous locations where we met an ever-increasing support that research informs us is fast increasing.”

New Studio
Station Manager Declan Gibbons gave an update on progress of the new studio; training, and plans for a revised schedule. He highlighted a number of new programmes, including a 30-part series called About Kilkenny, which features places, groups and organisations in and around Kilkenny. The series of 10 minute programmes is presented by Gavin Allman, from Johnstown.

Mr Gibbons also informed the meeting of a new four-part drama about the Liam MacCarthy Cup coming soon on CRKC. The station is also engaged in Podcast training with Ossory Youth, online and in-person. All are looking forward to hearing them on air soon.

The chairman was loud in his praise for the staff members like Cathriona Bolger, Eileen Connolly and Ann Nolan, for whom no task is too demanding. He also informed the meeting that it is planned to extend the station’s broadcasting hours in 2022.

He posed the imponderable “who will succeed us? are we doing anything about it? He spoke about infrastructure development projects and possible solutions. He spoke about interaction with community groups in our domain, and insisted that it was not a one-way street.

“We must enhance the value of every element that is Kilkenny,” he said. “Kilkenny must be first, last and in the middle.

“The Kilkenny brand must be central to everything we do in Community Radio Kilkenny City,” he finished.