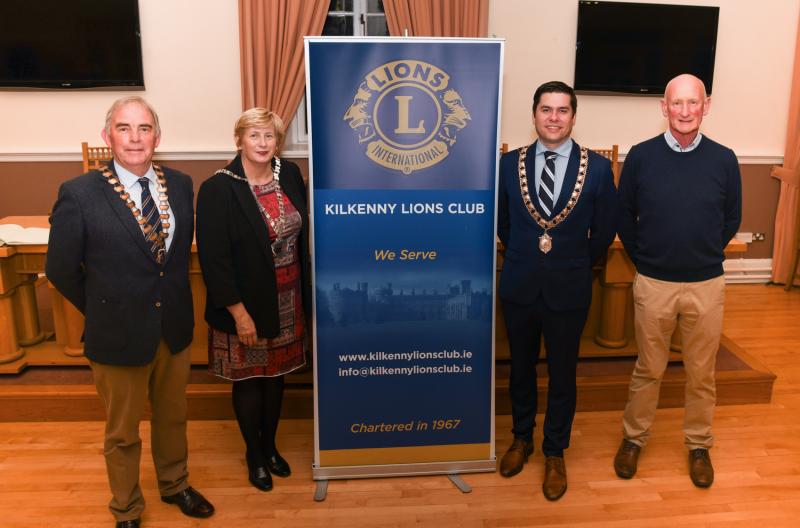 Cathaoirleach Fidelis Doherty thanked the Lions for the significant amount of money they have allocated over the years to organisations in County Kilkenny. She said that, without the Lions' support, many organisations would find it difficult to fully fund their programmes. She thanked the Kilkenny People and KCLR for their work in promoting the appeal.

He thanked all those volunteers in these local organisations who do such great work in our community. Lions President Eddie Holohan said it was a privilege to launch this year’s 2021 'Spirit of Christmas' Hamper Appeal and he is delighted that it is again being undertaken in partnership with KCLR and the Kilkenny People.

The 'Spirit of Christmas' builds on the success of the annual hamper appeal which has been run by Kilkenny Lions Club for the last 29 years. This and other events, to date, have raised more than €800,000 over that period. One hundred percent of the money collected is distributed to the charities as no administration or other costs are incurred.

The proceeds have gone to assist many local organisations such as the St Vincent de Paul Society, Kilkenny Social Services, Church of Ireland, Good Shepherd Centre,Amber Women’s Refuge Centre and many other organisations throughout the city and county of Kilkenny. In total, Kilkenny Lions have supported over 100 local community organisations over that period.

The primary fundraising is through the auction and sale of goods or services donated by local businesses. The appeal is divided into two sections, a Farm Section and a General Section.

The Kilkenny People publishes the General and Farm Auction lists with names of over 200 businesses over a three week period prior to and during the auction. The goods or services are then auctioned by KCLR96FM on air and it is hoped over €25,000 will be raised.

It's hoped there will be a shop available during this period to display the items to be auctioned and where people can collect the purchase afterwards.

The event would not be the wonderful success that it has been over the years without the support and generosity of many hard working people in our community.  Kilkenny Lions would like to thank the many people who contribute unselfishly each year to making this a success:
 KCLR and Kilkenny People for their partnership over the years.
 Brian Cody for his unfailing support each year
 The 200 or so, local businesses, without whose generosity the auction
could not happen.
 The people of Kilkenny who donate so generously
 Fellow members of the Lions Club who give hugely of their time each
year.

Mr Holohan acknowledged that this year will again be very challenging with a number of other fundraising events having to be cancelled because of Covid restrictions. They include the schools concert, and sponsored duck race. He expects to announce shortly further fundraising initiatives. He concluded by thanking again everybody for their support of the Lions Charity Appeal and he is confident that it will be a tremendous success.

Brian Cody congratulated the Lions for all their great work over the years and he was delighted to have been asked again to launch the appeal with the Mayor, Cathaoirleach and the President of Kilkenny Lions Club. He referred to the generosity of the people of Kilkenny who are never found wanting in helping the less well off in our community. He also thanked the business community who every year donate a significant amount of items for the auction. He concluded by wishing Lions every success over the Christmas period.