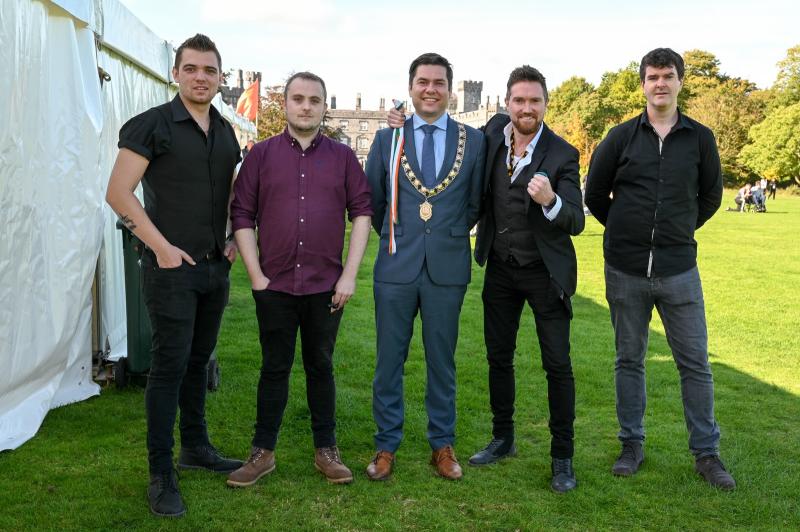 Mayor Andrew McGuinness with the Kilkennys

A fantastic selection of Kilkenny talent will provide a fun and entertaining night for the 2021 mayor's fundraiser.

Traditionally known as ‘The Mayor’s Coal Fund’, it’s a really important night for Kilkenny and raises significant funds for local charities. It’s also an important night in the social calendar of Yulefest — Christmas in Kilkenny.

The line-up includes: The Kilkennys, Sola, Davey Long, Tomas Jackman, Gwen Blanch and Alizes School of Singing - they will take to the stage at The Watergate Theatre on December 8 to kick off the Christmas festivities.

Mayor Andrew McGuinness, who is hosting the night, says there will be lots of surprises on the night.

“We have a fantastic line up with great musicians but we will also have some surprises on the night that will really add to the entertainment and the occasion,” he said.

“This is a great night and we are encouraging everyone to join in the celebrations, get dressed up and get the chance to meet and chat to people again - all socially distanced of course. We are inviting people to come early and enjoy the new outdoor space beside the Watergate which will be looking very festive.”

Mayor McGuinness said it had been a long time since there were social nights to look forward to, so he is encouraging everyone to get into the atmostphere and enjoy the night.

This year all funds raised will go into the Mayor's Christmas Fund and will be presented to Kilkenny’s Lions Club who will distribute it to St Vincent DePaul and local charity organisations.

“The Lions Club do incredible work on a continuous basis supporting people in need but also supporting local organisations that make a positive difference in Kilkenny. All money raised will help local people who are vulnerable and struggling at Christmas time,” said Mayor McGuinness.

“With the brilliant staff and crew at the Watergate led by director Joanna Cunningham, the fantastic entertainment and a very worthy local charity, it can only be a great night that we can all look forward to."

“The Watergate loves contributing to this great event every year and seeing all proceeds going to the very worthy charity recipient - this year The Lions Club. It is full of good will, entertainment and fun,” said Watergate director Joanna Cunningham.

DOORS
The Mayor’s Christmas Concert takes place in The Watergate Theatre on December 8. Doors open at 7pm with the first act on at 7.30pm. Tickets are €18 and go on sale from Friday, November 12, at watergatetheatre.com or in person/ over the phone at the box office, from 3pm-6pm, on Thursdays, Fridays and Saturdays This event sells out every year so grab your tickets early.