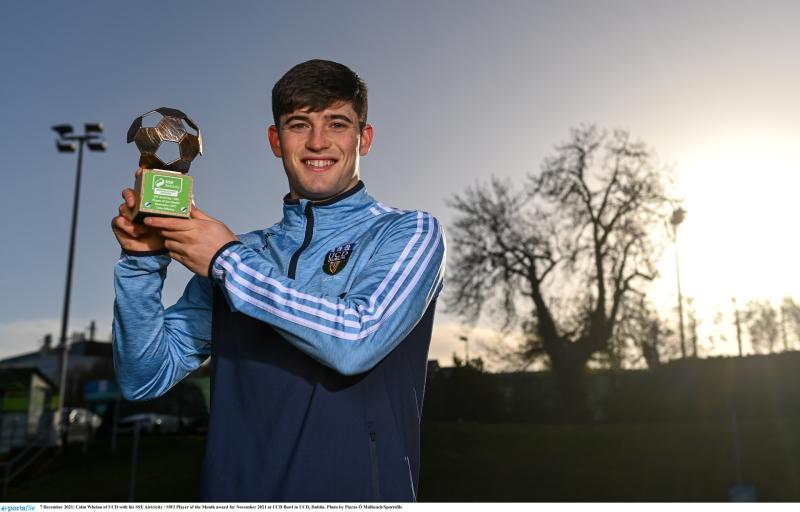 Colm Whelan of UCD with his SSE Airtricity / SWI Player of the Month award for November 2021 PICTURE: Piaras Ó Mídheach/Sportsfile

Thomastown's Colm Whelan has been voted SSE Airtricity/Soccer Writers Ireland Player of the Month for November.

The award caps an incredible season for the Republic of Ireland under-21 international, who netted 25 goals and helped UCD earn promotion to the Airtricity League Premier Division for next season.

Whelan earned the award his exploits in the promotion/relegation playoff. He scored twice against Treaty United and notched up one against Bray Wanderers, then hit the net in the final against Waterford, a game in which fellow Kilkennyman Dara Keane also scored for the Students.

“To win the award is a great feeling,” he said. “I’m over the moon. It’s nice to be recognised and to be the first player from a First Division club to win it since 2015 (UCD’s Ryan Swan).”

“Ellen won the Women’s National League award for November as well so Thomastown will definitely be buzzing with that,” he added.

“They’re a great club, and they’ve always supported us, so we’re happy to be making them proud.”