Musican Liam Ó Maonlaí will be performing in Kilkenny this evening 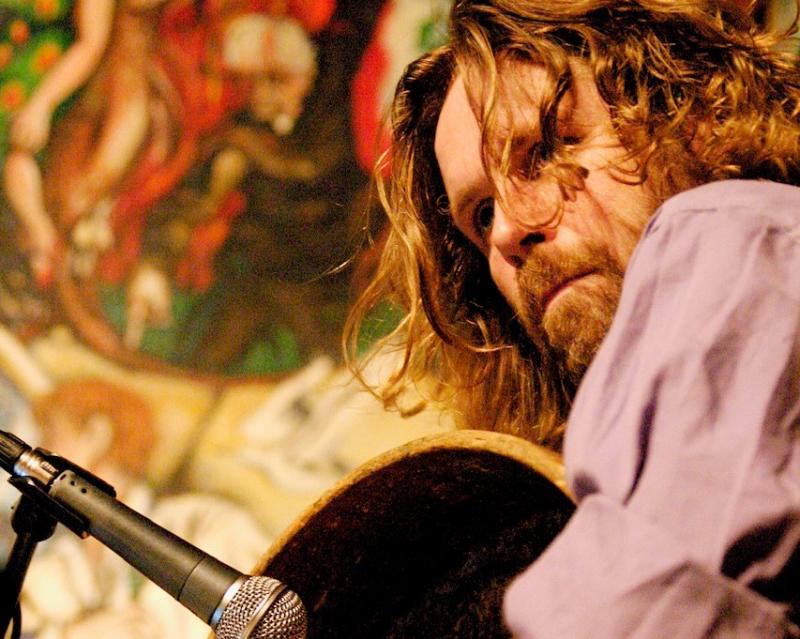 Liam Ó Maonlaí and guests will perform to a sold out gig tonight in St. Canice’s Cathedral. Doors open at 5pm, performance is at the earlier time of 6pm.

I am a huge fan of Liam, so it’s always a pleasure to chat with him. The last time I interviewed Liam was in my Irish TV days when he performed to a full house in Lyrath Estate Hotel. The good old days, when one could have a full house!

Liam can only be described as whirlwind of enthusiasm and speaks as lyrical as he sings. One thing that did strike me in our last encounter was how his hair was in better condition than my own and he wore no socks or shoes on stage. Back then, I wasn’t brave enough to ask why, but I will this time!

I caught up with Liam over the phone last week, while he was touring in Belgium. He had just finished a month of working on a new dance project ‘Arima’ in the Basque Country in Spain. More on that later! We had a great chat ahead of his upcoming performance in Kilkenny and the 57-year-old star certainly hasn’t lost his zest for life.

He puts into context a lot about the world we live in today, parting with some wise words on how we can survive these strange times.

Here is a glimpse into Liam’s world…

Liam, a lot of artists have cancelled upcoming performances with the restricted 50% capacity. Has it affected you?

Fortunately, your Cathedral in Kilkenny is big, and with the support of the local Arts Office we can go ahead with December Sounds on Monday.

The funny thing is that people think they can control everything, but they really can’t.  It never was the case, but now we are getting a taste of the unknown.

A lot of people have had to live with the shutting down of things for a long long time. Just at a whim of superpowers, this is daily life for some countries.

What are your plans for 2022, or does it depend on what the world has planned?

I’ve had a lifestyle of being at home and being away. Things had started to get into a nice pattern for me. I would rarely go away for more than a week or two at a time. The pace that I work at this stage in my career is more humanly manageable.

I quite enjoyed visiting other countries and meeting people. I have been in the music industry for over 35 years, so you make friends in different places all over the world.

Please God I will be going back to the Basque country in February to continue working on Arima. I met Amaia Elizaran in Ceathrú Rua last September. We were part of a collective brought together by Darach Mac An Iomaire. Together under Darach’s directorship we co-created a show. Amaia is from the Basque Country.

At one stage during the creating Amaia asked if she and I might create something together. We found we had a clear connection between my music and her movement. She spent the year working to get funding to create Arima. Last month we spent three weeks in research and creative rehearsal in the town of Errenteria in the dance house there. On February 5 next year, the premiere of Arima will play in San Sebastian.

As you said you’ve been in the music business for more than 35 years. How did you cope when performing abruptly stopped?

When the pandemic started, I thought about how I wouldn’t have that outlet anymore. So, I decided to broadcast a gig with the extraordinary technology of my telephone! I think I played to 800 people, just by touching a button from my living room! I did a few of those and enjoyed them.

I also decided I just wasn’t going to listen to the radio. Simply because we would have the news, then the repeat of the news followed by a programme about the news, with a different angle, but really, it’s just the same angle - that for me was just a drip feed of misery.

You also describe that time as an unprecedented gift.

I decided I would get up with the dawn, with my first waking and just get out of the house and walk. That became a beautiful couple of hours for me every morning and an unprecedented gift.

I found I really enjoyed being at home. I reacquainted myself with my own rhythm and with creation, by removing myself from the chatter and the noise.

Like everyone, I did a bit of DIY and built a concrete step at the back of the house!

I love that phrase ‘reacquainting with your own rhythm”.

We as Irish people upped our ‘outdoorness’ by one hundred per cent. It was lovely to see people getting out because people need people. We need to look after our mental health and a walk is a phenomenal thing, I can’t sing the praises of a walk enough. The difference it can make to your mindset by just going out and walking for two hours in whatever the weather.

There’s no measuring it, it’s like making music or being in love. Life is so full of millions of tiny occurrences and if you pay attention to your being in life, it’s exhilarating.

Even with people taking up all the sea swimming. I have always been an advocate of jumping in the cold water, it’s fantastic for your nervous system and your health in general.

Is that why you like going barefoot when preforming?

Sometimes I don’t wear socks and shoes, and it’s for a practical reason. I was on tour back in 1989 and I was looking at the stage, while thinking about the amount of energy I would exert. I was also thinking about my discipline, or rather lack of it for maintaining things and washing clothes while on the road!

So, I just took the socks and shoes out of the picture. Lots of people think it’s me grounding with the earth! In fact, it just feels good to be barefoot, but the trigger was purely practical!

Will you be having a traditional Christmas when you come back home to Ireland?

We’ll have a Christmas, but it will be quiet.

My daughters Godmother Jules was with us during the lockdowns. She was very much part of our Christmas. Once things opened again, she moved back to Cavan and she sadly died in May.

IF ATTENDING, PLEASE NOTE THE TIME HAS CHANGED TO a 6PM START, DOORS WILL BE OPEN AT 5pm.