Excitement builds ahead of the big day at Gowran Park tomorrow 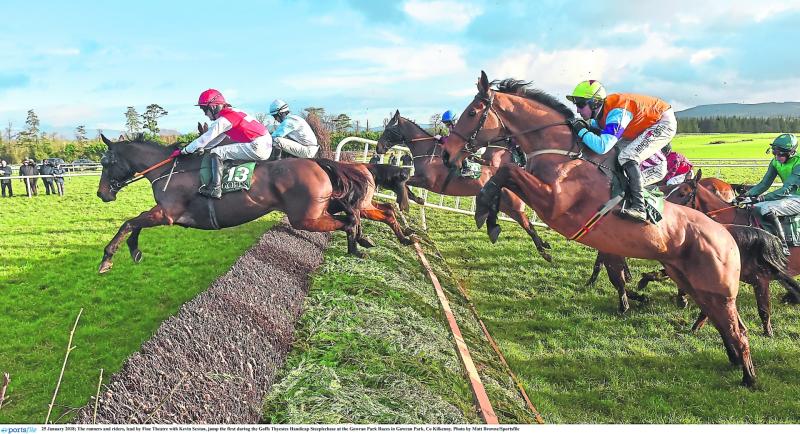 The easing of restrictions means Gowran Park will see a bumper crowd for the Thyestes Chase Pictures: Sportsfile & Dylan Vaughan

Declarations for the big race at Gowran tomorrow were released on Tuesday morning with 18 horses going to post and Longhouse Poet is the current favourite.

The eight-year-old bids to hand trainer Martin Brassil his second win in the race after Grand National winner Numbersixvalverde in 2005.

A winner on his final start last season, Longhouse Poet finished seventh on his reappearance at Limerick over Christmas with jockey Darragh O’Keeffe set to retain the ride.

Willie Mullins and Gordon Elliott have a strong hand with five runners each, with Elliott bidding to claim back-to-back wins in the €100,000 handicap with Coko Beach.

The local trainer will be aiming to win the race for the ninth time, his last success being Total Recall in 2020 when his nephew Danny guided the horse to victory in deep fog.

The Mullins-trained runner will take on eight rivals in the 3m½f contest before an anticipated tilt at the Stayers’ Hurdle in March, for which he sits as current ante-post favourite at 11-4.

The race has a glittering roll of honour with the likes of War of Attrition and Presenting Percy claiming the Grade 3 contest before going on to bigger and better things.

As well as the Thyestes and the Galmoy, there is the 2m Langtons Kilkenny Handicap Hurdle, the Connolly’s Red Mills Irish EBF Ladies Auction Maiden Hurdle over 2 and a half miles and the Adare Manor Opportunity Handicap Hurdle.

The card is then bookended by the Daly Farrell Chartered Accountants Beginners Chase and the PJ Foley Memorial Flat Race.
book early

The racecourse is advising anyone that is looking to attend to buy their tickets online and avoid the queues.

The action from the Kilkenny track gets underway at 1pm with the feature 3m Goffs Thyestes Chase going to post at 3.05pm and the race can be seen live on RTE Television.

There will also be entertainment from After Dark in the betting ring pavilion after racing.