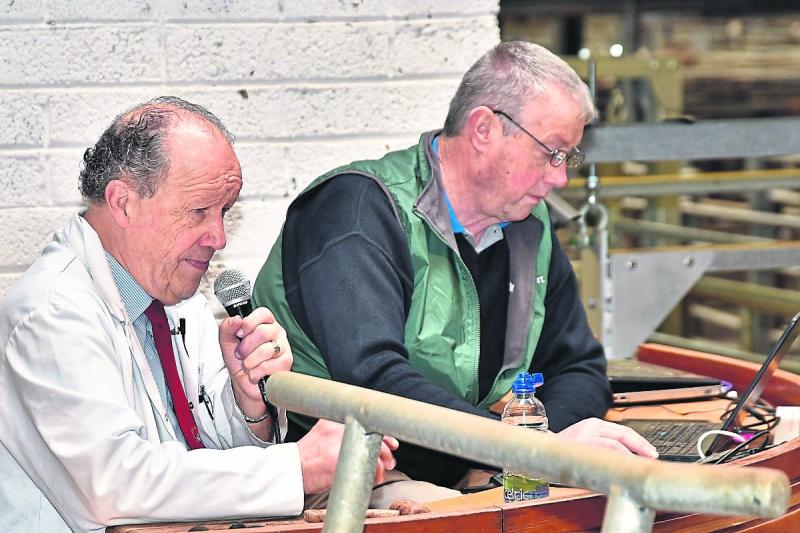 George Candler, MC for the St Patrick's Day Parade in the city, has been a familiar voice to farmers who have attended the Kilkenny Mart over the last 50 years

Well known for his skills with a microphone - in the auctioneering and MC worlds - George Candler was born in Roscommon in 1950. He started as a trainee auctioneer in Kilkenny Mart in 1972, which makes this year his 50th year in business. He intends to keep on banging the gavel to the words of ‘Sold’ for as long as he can!
As well as his mart job, George also does some pedigree cattle and sheep sales.
“On Monday mornings I sell sheep, by 12.30pm I sell dairy,” he said. “On Tuesdays we have calves or yearlings. On Thursday it’s our big cattle sale. In between, I freelance and fill in at marts around the country.”
While George enjoys the pedigree sales, he has a special place in his heart for the sport horse sales at Cavan Equestrian Centre. This job he takes as a holiday!
A keen fan of rugby, George has been very involved with Kilkenny RFC for years. Modestly he tells me, “I wasn’t great at the game, but I had the distinction of propping one of Ireland’s captains in my school days - the great Ciaran Fitzgerald.
“Ciaran only started playing rugby in fifth year at school, the same year I played against him. However, you could see something in him that really stood out and he was also a great leader.”
George is also known for his outstanding charity work for which he has received several other awards including Kilkenny Person of the Year. This year we welcome him back for his humoured running commentary as Master of Ceremonies at the St Patrick’s Day Parade.
So, how did a Roscommon man end up in Kilkenny?
Long story short Siobhan – my father James was chairman of the IFA national livestock committee in the 1950s and was founding chairman of Roscommon Mart in 1959, a position which he held until his death in 1986. So, naturally, I spent my teenage years juggling secondary school on top of regular trips to the mart.
Through my father’s work with the IFA and as chairman of Roscommon Mart he knew Michael Gibbons, who was chairman of Chairman of Kilkenny Mart.
Both had been in the army; Michael Gibbons in the Irish Army while my Dad served in the Second World War in England so, no doubt, the friendship began by exchanging the many stories of that era.
Hence, I was sent off to Kilkenny Mart in 1972, to begin my training as an auctioneer.
When my training was completed, I was offered a job to stay on. The plan was to return home to the farm because I was the only son. However, I stayed on, having made lots of friends while I also got involved in various choirs and musical groups.
Sure, at home in Roscommon, there were only bachelors living on either side of us, so Kilkenny was very appealing!
Kilkenny was and still is one of the biggest and nicest marts in the South-East. How is the cattle trade doing at the moment?
It’s a very buoyant trade right now. Today alone (Thursday, March 10) there’s 1,300 cattle here, and last week we turned over €1.4 million.
Even though we are out of the pandemic and hopefully heading towards the right direction, we encounter another problem whereby there appears to be scarcity, with more demand than there is supply.
The mart has also become more popular with beef farmers, who used to bring their stock to the factory.
However, now they are preferring the ring, mainly because there’s not as many deductions i.e., in the factory they want them quality assured, with specific movements etc.
You were born to hold a mike in your hand and have the gift of the gab!
That’s an awful admission, but true! This February I will be here 50 years in Kilkenny mart, and I love every minute of it.
As for the MCing, that’s mainly volunteering. I wouldn’t do it, bar I enjoyed it and I get more out of it than I put in.
We know you love rugby and when you stopped playing it, you coached here. However more recently Kilkenny Rugby Club has become the home for Relay for Life, a cause very close to your heart.
Yes, Relay for Life is one of my pets. We raise funds specifically for the night nurses who look after people’s welfare when they are suffering with cancer.
Living with cancer, as opposed to dying with it please God, your eyes are opened and make you appreciate that we are all vulnerable in retrospect.
George, you caused quite a stir when you spoke about your own brush with mortality on Matt O’Keeffe’s farm show on radio.
Yes, I spoke about being diagnosed with prostate cancer, which I am currently being treated for and I came under fire for it. Some people felt I shouldn’t have said it publicly, because they felt it was a private thing.
As it transpired, several farmers came to me with concerns that they may have problems with their prostate, passing some blood etc. I always tell them to go to the doctor immediately.
There are new treatments now, not just on a yearly basis but monthly, so don’t mess around, go get checked.
You are the face and voice of some many charity events around Kilkenny, and we are delighted to have you back this year MCing the St Patrick’s Day Festival.
I’ve been involved in the St Patrick’s Day Parade for nearly 30 years, starting back when Pat Nolan was involved in it.
Back then we had loads of lorries and trucks as floats, sometimes breaking down and holding up the whole parade! We used to have lots of animals, leaving deposits on the road, I even remember elephants and tigers in it one year!
Pat Nolan did an amazing job as a one-man band pulling it together. We had some laughs over the years - mainly down to me winging it! 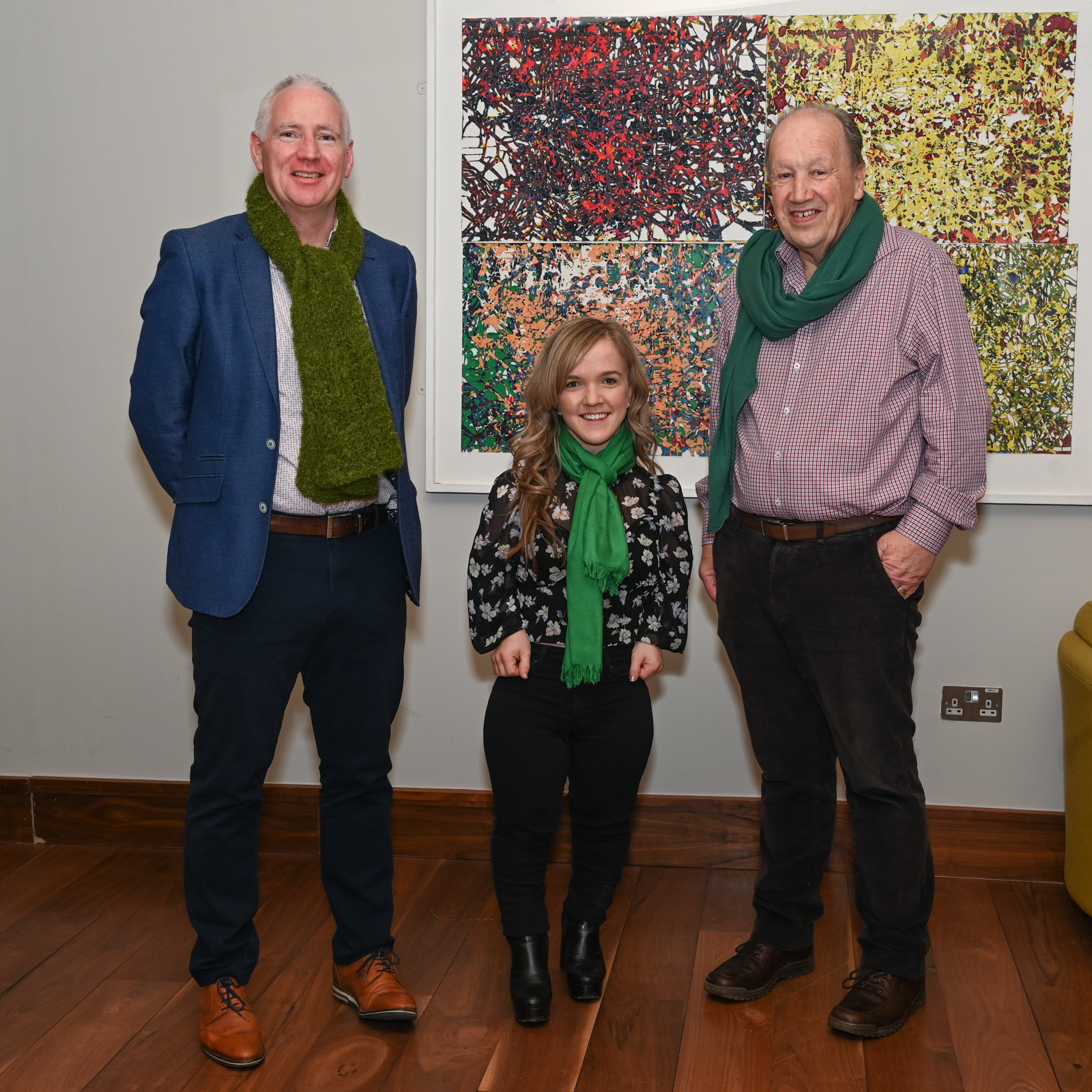 Our present-day parade is a lot more structured with the professionalism of Marian Flannery and her committee and Kilkenny County Council behind it. We encompass all surrounding parishes and communities and it’s wonderful.
You urge people never to wish their lives away.
Yes, I could never understand when radio DJs used to say things like, ‘Hello, it’s Wednesday, only three more days to the weekend’. I couldn’t understand that analogy, as I am the sort of person who takes one day at a time and goes with it.
I’m very lucky, I am in a job that I love and enjoy. I don’t get up in the morning and say there’s only three more days to the weekend. Let’s encompass the day we have and do the best we can with it.
Join George for his entertaining rolling commentary at this year’s St Patrick’s Festival on March 17 at 1.30pm. It’s going to be the best ever!
Happy St Patrick’s Day to all our readers. While counting our blessings in the world today, I would like to wish you all a safe and pleasant double bank holiday.
For more information about the six-day festival visit www.stpatricksfestivalkilkenny.com