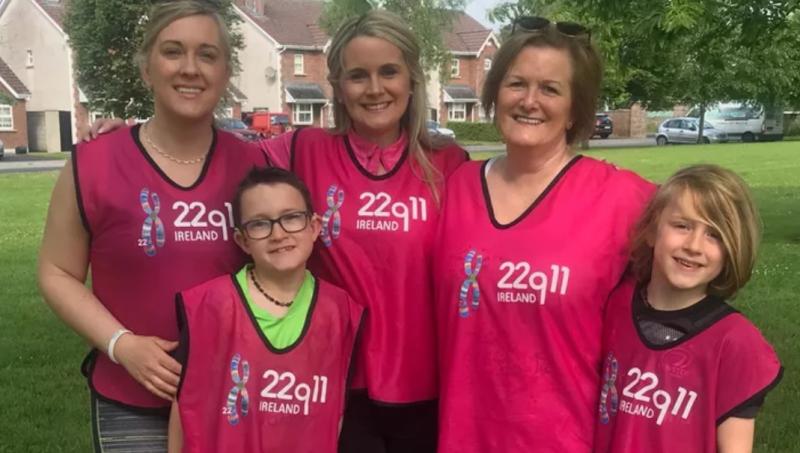 A Kilkenny mother has set up a fundraiser as she plans to take on the Women’s Mini Marathon to raise funds for 22Q11 Ireland.
Carol Harper is raising funds and awareness for the 22Q11 syndrome, which her 12-year-old son Jason has.
22Q11 syndrome starts when a tiny part of one of your chromosomes is missing. Chromosomes run throughout your body and 22Q11 can affect many parts of your body and brain.
22Q11 Ireland is run by volunteers, who work tirelessly to spread awareness and run a currently unfunded 22Q11 clinic. Through workshops and conferences, they also give parents the skills and knowledge to help our children with 22Q11 reach their full potential.
Carol’s son Jason was diagnosed with 22Q11 when he was four years old in February 2014.
“We had never heard of it before, since then we have learned so much about this syndrome, mainly from 22q Conferences, Anne Lawlor, 22Q11 Ireland & the families we met through it. People with the deletion are not affected in the same way, there are over 180 listed medical issues associated with it but not one is common to everyone,” said Jason's Mum, Carol.
“Every day Jason works extra hard when doing all the things we take for granted, like hearing, swallowing, walking, talking. He accepts so much and is such an example to us in how he copes with everything and adapts to what life brings. He takes it all in his stride and still smiles!
“In the fours years after his diagnosis, Jason had more than 200 medical appointments (87 in the first year) and he has seen over 15 consultants in Crumlin.
“I remember when I started doing the mini marathon for 22q11 Ireland after Jason was diagnosed eight years ago, people asked what we were raising money for. I told them that our dream was to have a clinical care coordinator (along with a 22q clinic which we also now have at Crumlin) and I still can’t believe it’s actually happened last November. The money raised over the years helped fund research and support our applications for this care coordinator.”
For more see www.gofundme.com
/f/team-jay-2022-22q