Drugs awareness initiative to be rolled out across Kilkenny GAA clubs 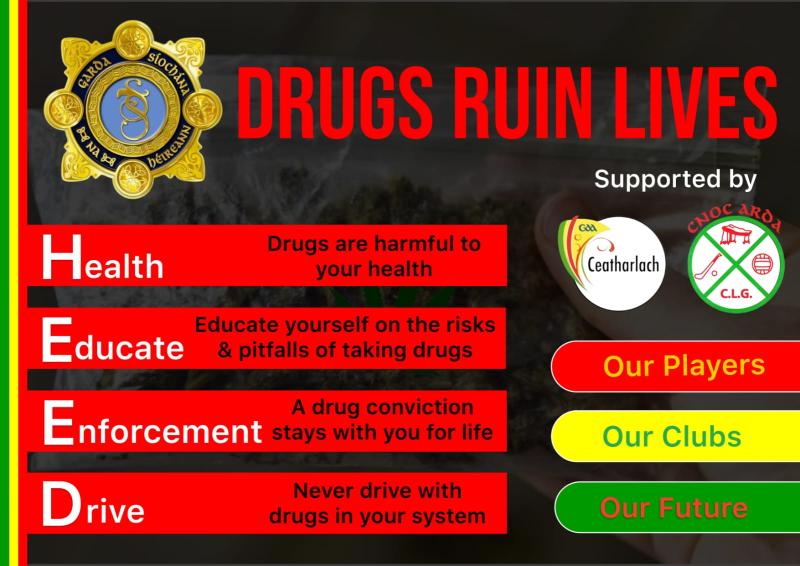 The initiative will be launched in Kilkenny over the coming weeks

GAA clubs across Kilkenny have agreed to roll out an a drugs awareness initiative.
At this month’s meeting of the Kilkenny County Board it was agreed to launch the initiative at the home of Kilkenny GAA, Nowlan Park over the coming weeks.

The initiative has already started in Carlow following an approach by their county board to gardaí who are supporting the campaign.
Crime prevention officer, Sergeant Peter McConnon said the chairperson of Carlow GAA approached gardaí in February and said that there was a problem with drug use and abuse within the GAA community and that they wanted a awareness campaign. Since then the county board have met with gardaí and club representatives.

“All the clubs saw the need to roll out initiative which see gardaí visit each club to talk to the executive and coaches from adult to underage level,” said Sgt McConnon. A new information flier was also distributed.

Chair of the Joint Policing Committee, Cllr Pat Fitzpatrick said that a meeting will take place with representatives from the Kilkenny GAA clubs and that gardaí would attend to raise awareness of the ‘scourge’ of drugs.

Chief Superintendent Padraig Dunne said that he fully supported the venture which involves the GAA, gardaí, the local authority and the Joint Policing Committee.
“If you could divert one person from each club from this road of torment you would stop the suffering of so many families,” he said.

Cllr Martin Brett remarked that there are ‘an awful lot of young people are being sucked into the underworld of drugs’ adding that it is ‘a frightening problem’.
Cllr Deirdre Cullen commended local gardaí on the work that there are doing in schools with young people around alcohol and drugs awareness and the issue of consent.
Superintendent Derek Hughes of Kilkenny Garda Station said that he had surveyed 4,000 families and asked them what they wanted gardaí to focus on in 2022 and the overwhelming answer was drugs adding that gardaí needed to tackle drugs from ‘every angle’ to keep young people safe and reduce crime.

Sgt McConnon said that the first port of call is to know the signs of someone on drugs.
“If you told an under 20 training sessions that everyone would be tested for drug driving, how many would walk home,” he said adding that the initiative is the GAA sending out a clear message that drug use is not acceptable.