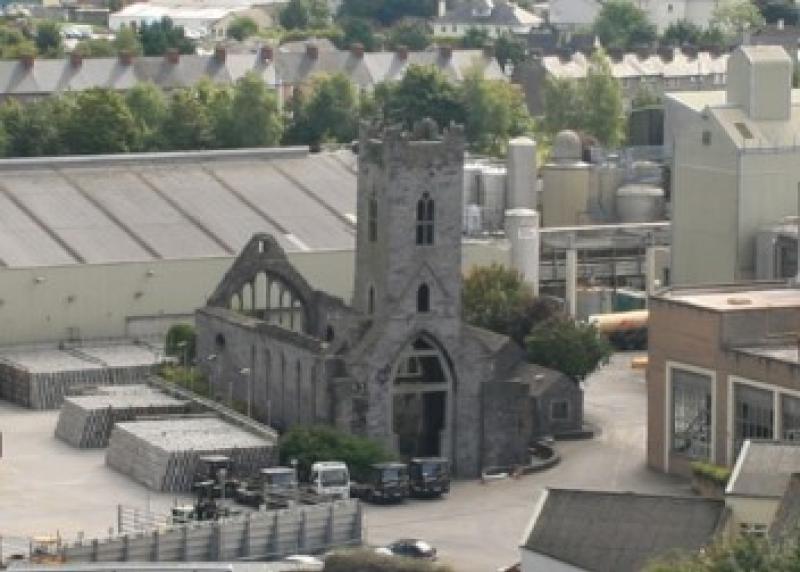 A draft conservation plan on the Abbey Quarter in the heart of Kilkenny City will go on public consultation from next Monday (June 27).
A number of development strategies contained in the draft plan were outlined at Monday’s meeting of Kilkenny County Council.
Senior engineer with Kilkenny County Council, Tony Lauhoff presented the draft plan to members and outlined how the proposed park in the Abbey Quarter very significantly improves the setting of St Francis Abbey, City Walls and Evans Turrett.
The park also includes proposals to interpret the below ground archaeology and a new use to be sought for the former sacristy area of the Abbey.
Mr Lauhoff also told members that there is a clear need for Kilkenny County Council and the Office of Public Works to work together on proposals for the park and St Francis Abbey.
The draft plan also contains a design concept prepared for the interface between the park and the Abbey and there is also a proposal to reflect the location of St Francis well with a water feature. Options for access to Evans turret are also outlined, possibly as a viewing platform. In the long term, consideration should be given to the removal or modification of the Tasting Room and new buildings to give consideration to opening up views of the Abbey.
The draft plan also states that there the brewery use was not sympathetic to these structures and outlines how the proposed park improves the setting of St Francis Abbey and removes the former industrial yard.
Responses to the public consultation group will be considered by the conservation group and the steering group and a report will be presented to the members of Kilkenny County Council in September.
The draft conservation plan will be updated as appropriate to take into consideration the responses to the public consultation.
The commitment to prepare a conservation plan for the heritage sites is contained both in the Abbey Quarter Masterplan and the Kilkenny City and Environs Development Plan.
Cathaoirleach of Kilkenny County Council, Cllr Pat Fitzpatrick thanked Mr Lauhoff for his ‘informative and exciting’ presentation while Cllr Andrew McGuinness described it as ‘an exciting time for Kilkenny’.
The public consulation period runs from June 27 until July 25.