Who is the man behind the Horizon Irish Open at Kilkenny's Mount Juliet? 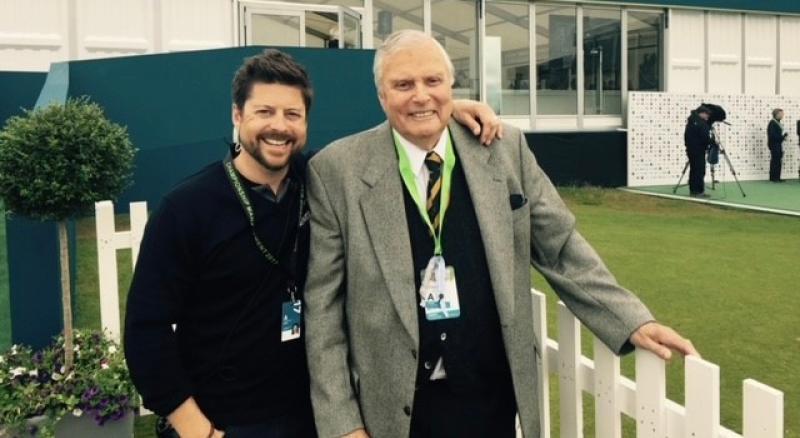 I caught up with Simon Alliss in his Portakabin at Mount Juliet Golf Course as he adds the finishing touches to this year’s tournament, the Horizon Irish Open at Mount Juliet Estate from June 30 to July 3.

Last year he brought us the Dubai Duty Free Irish Open, one of the first pilot sports events to be held by the Irish Government in their bid to reopen the country after the pandemic. 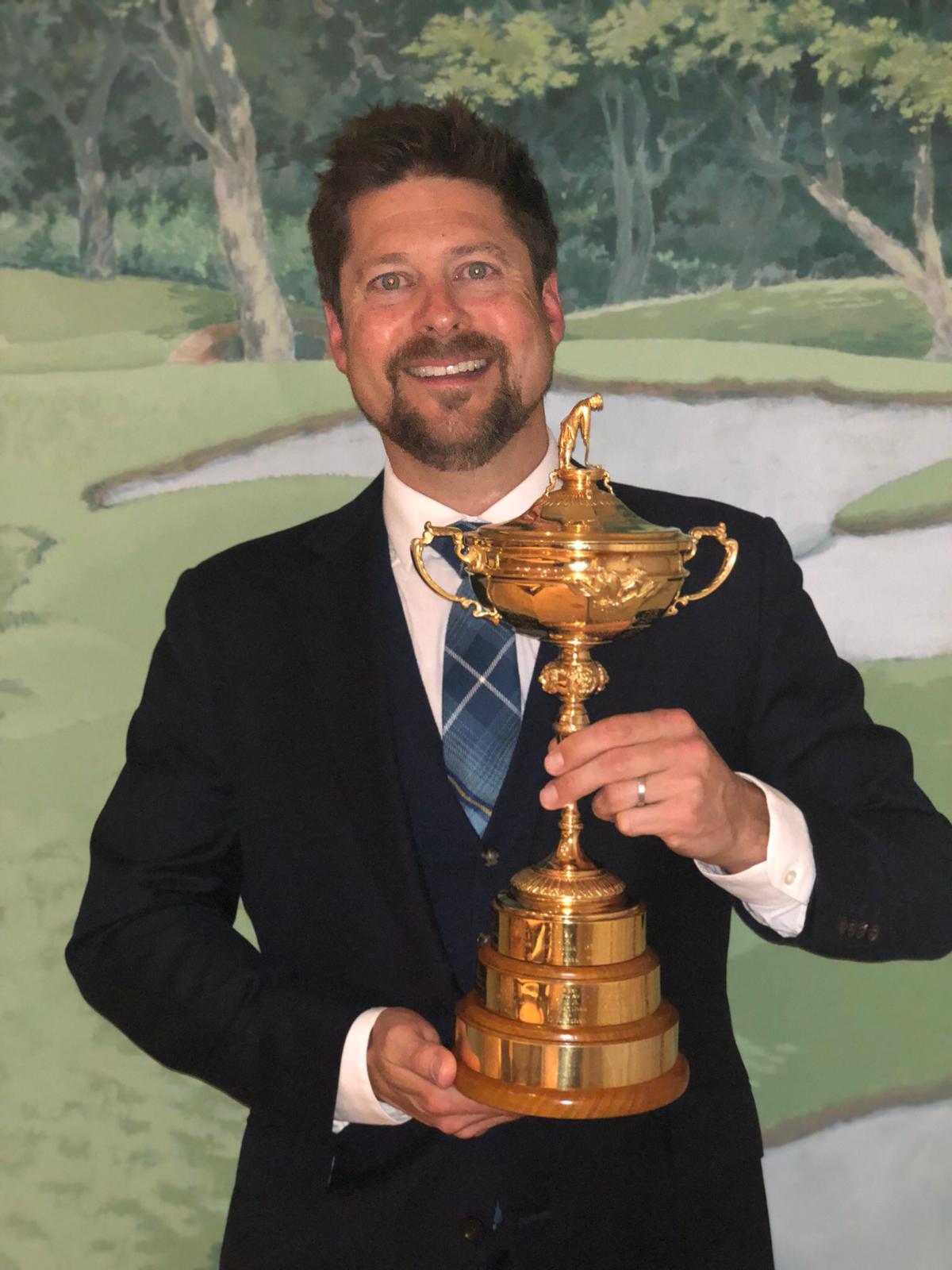 Simon Alliss, the Championship Director of the Horizon Irish Open, with a piece of golfing treasure -

Simon’s late father, Peter Alliss was a world-famous professional golfer. He retired in 1969 and entered the world of golf broadcasting for the BBC and ABC for over 50 years and was known as that famous ‘Voice of Golf’.

Golf may be in the DNA, but Simon claims he did not inherit his father’s playing skills. To unwind in the hectic world of major golf events, he practises yoga, a hobby he picked up over the first lockdown.

As the Championship Director, he is top dog and I must commend him on his calmness at last year’s tournament, there is always a smile on Simon’s face, which puts his whole team at ease.

The tournament is back to full capacity for the first time in three years with your new sponsor Horizon Therapeutics.

Yes, it’s our first year with them, a new sponsor and new injection of money for the same incredible heritage event. You can see we are very excited, even from the glamour of my porta chain! The sun is shining, so it’s a very positive atmosphere around Kilkenny at the moment.

You also have a charity partner ‘Make a Wish Ireland’ this year; do you always have one?

We’d like to, not always but it’s consistent. I think what is different about the Horizon Irish Open, it’s quite unusual to have a commercial partner sign up for the length they have, which is a six-year deal. It’s amazing that they have made such a commitment to an event like it.

Horizon has also aligned up with ‘Make a Wish Ireland’ as a charity partner for the next six years. It's an incredible commitment on their behalf and it allows us to build on whatever activation we do this year, which leads into next year’s tournament in the K-Club.

The aim of 'Make a Wish' is to make dreams happen and we are really pumped with the association. It’s just a brilliant synergy and a lovely story.

Golf is in the blood, your late father is world famous Peter Alliss, the Voice of Golf and is in the World Golf Hall of Fame. What a legacy! I presume he was your route to golf.

Yap, big boots to fill! I tried a lot of sports and randomly I wanted to be a skier. Golf was in the blood and genes, but not the talent! I was a reasonable golfer but never good enough to do anything and I didn’t have the mental aspect for it.

I liked skiing and played a bit of hockey, but various injuries took me out of that. I worked in a hundred different industries, I sold cars, I worked in pubs, in the buildings and I really didn’t know what I wanted to do, I just liked being with people.

Then through a strange circumstance, I ended up not knowing what to do next. My dad had dinner with Ken Schofield, who was the then Chief Executive of the then European Tour. I had an interview and that was 20 years ago, and I’ve been here ever since!

After a couple of years working on the tournament side, my line of work started to cross over with my dad’s, while he worked for BBC.  It started with the Scottish Open in Loch Lomond and I was able to bring an element of what I was doing, which was very different, to what my Dad was doing.

I was very lucky that our professional lives crossed in different capacities, to work in a business and contribute to golf, a business that my dad had such a great love and gift for, as a player and broadcaster. I was very lucky; I had a very good relationship with my dad and golf brought us closer.

It’s a very different tournament to last year's pilot event. Numbers wise, what are you expecting this year?

We are planning a full-scale event this year, it’s a normal pre-Covid Irish festival of golf and fun. Last year we had a bubble environment for players, media etc. Covid was still very much still front and fore, while diluting a little bit in the communities.

We were up to 2,500 people around the site last year. This year we are much more, up to 10,000 to 20,000 per day, depending on the weather. We can always expect a really super turn out for an Irish Open. It will be full guns all blazing! 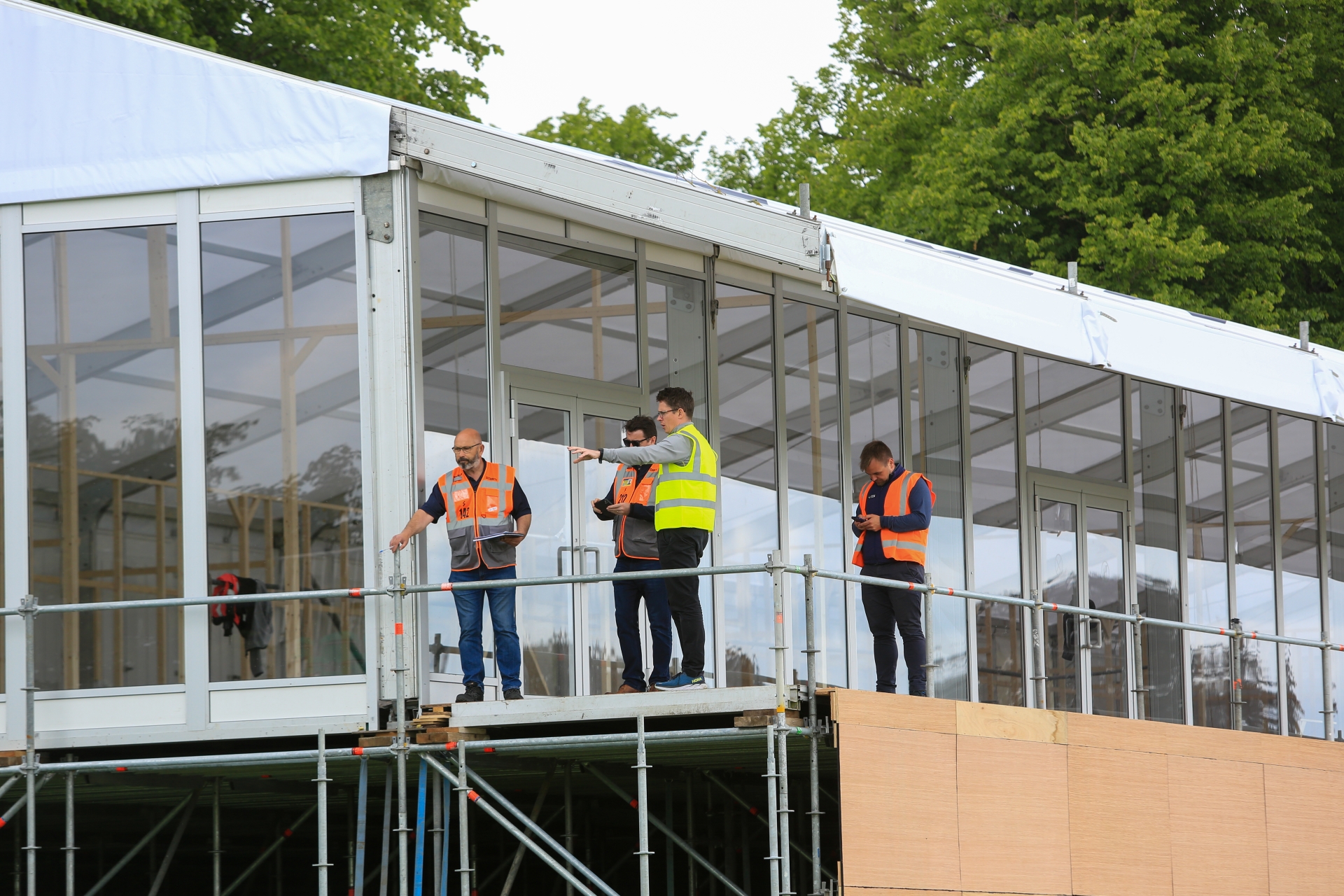 How much goes into planning an Open of this scale?

The build is three months, but the planning takes a full year. The team is here for about three months, starting with the build of the substructure. So, there’s lots of trucks and noise, hence it takes a big management piece for us to work on an Estate like Mount Juliet, where you have normal business, guests, golfers and wedding guests. The last thing they want is a huge, whopping lorry coming in with scaffolding, and guys running around hi vis jackets in forklifts.

It's not just about building something, it’s about a relationship piece and management responsibility that we respect where we are working in collaboration with a venue.

We have some great Irish lads playing this year. So, who is hot?

We have a great line up and Shane Lowry is a super supporter of the Irish Opens. It’s really good to see Seamus Power on home soil, because he is playing a lot of his golf in the States and the Irish fan hasn't really been given the opportunity to see him walking along the fairways here.

You have some great names for the celebrity Pro-Am, again with more to announce this week. One that caught my attention is actor James Nesbitt as I’ve been glued to his show ‘Missing’ on Netflix. It will be great to see him in Kilkenny.

Yes, I am a massive fan of James. He has played in a few Pro-Ams and he is a great ambassador for golf. He has supported this event for many years, he is also dead keen and a handy player.

Like you Siobhan, I was absolutely revertive with his programme. We are delighted to have him, we also got golfer Leonia Maguire, who will participate in the Horizon Irish Open Pro-Am for the first time, she is a great addition as she is taking the world by storm. We have former Ireland and Manchester United footballer John O’Shea, rugby star Rob Kearney, Olympian Greg O’Shea, former Galway hurler Joe Canning and three-time Derby-winning Jockey Johnny Murtagh, along with world number one Disability Golfer Brendan Lawlor, and popular Today FM broadcaster Dermot Whelan, with more names to be revealed in the coming week.

The Wednesday of the Pro-Am is going to be a super day with music from Toploader from 4pm to 6pm on the main stage in the Festival Village.  Also, with music from Hermitage Green and Allie Sherlock, it's promising to really stand out this year.