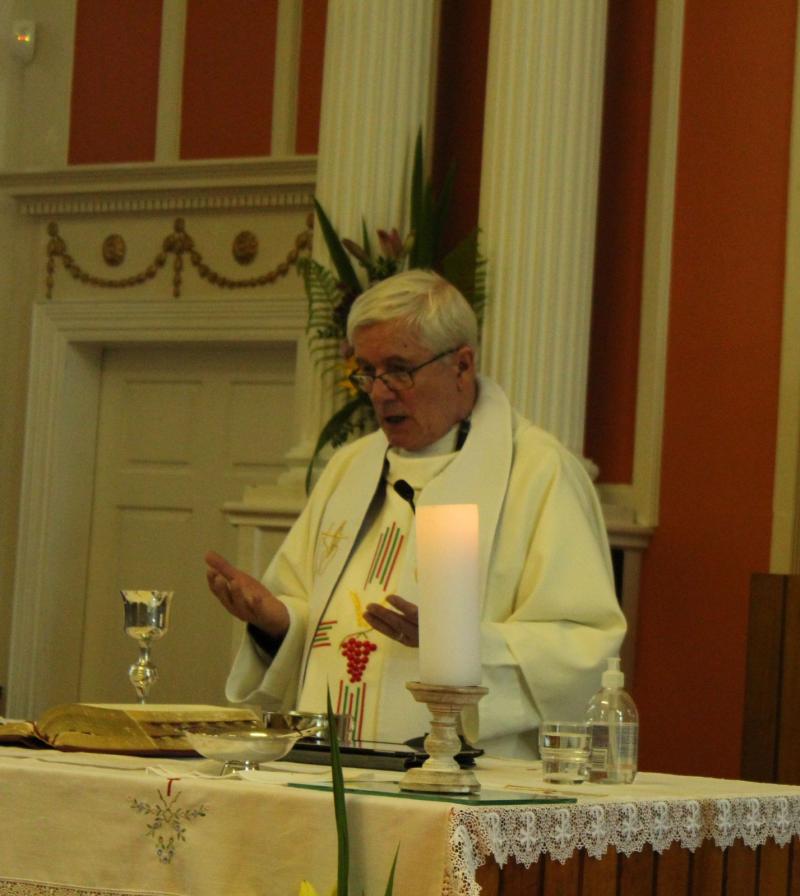 Friends and family celebrated with Father Eamon Aylward who recently celebrated his Golden Jubilee of Ordination at a special Mass held in South Kilkenny earlier this month.

Having travelled and practiced his vocation around the world it was only fitting that Fr Aylward would return to his roots and celebrate the momentus occasion in South Kilkenny.

On June 19, 1972, Fr Eamon Aylward celebrated his first Mass in All Saints Church, New Chapel, Ballyhale, Co. Kilkenny. He returned there on June 18 of this year for a Mass of Thanksgiving for his Golden Jubilee of Ordination and celebrated the Parish 9am Mass on June 19.

Fr. Aylward was born in Dublin in 1948. He is the oldest of five children (Noreen, Joan, Marian and Patrick) born to Ned Aylward from Knockmoylan and Maureen Brennan from Ballyhale and is a first cousin of Liam and Bobby Aylward, both of whom served for many years in both local and national politics.

Having attended primary cchool and one year in secondary school at CBS Synge Street, he left Dublin in 1961 to attend a boarding school run by the Congregation of the Sacred Hearts in Clones Co Monaghan.
After secondary school he joined the congregation of the Sacred Hearts and in 1966 made his first Profession in Cootehill, Co Cavan. This was followed by the study of Philosophy in Cootehill and from 1968, the study of Theology in the USA. He was ordained to the priesthood in1972 in Cootehill, Co Cavan and his first assignment was to Damien High School in Los Angeles.

While in LA he attended a Marriage Encounter (ME) weekendexperience designed to offer a process to help good marriages be even better. Eamon became very involved with this Church movement and on his return to parish work in the UK in 1973, he regularly led weekends for ME, Engaged Encounter and Choice weekends for single adults.
In 1976 he was appointed Vocation Director for the Ireland-England Province of the Congregation and moved to live in Ealing West Lond on with regular ferry journeys to Ireland to speak on vocations in Irish secondary schools.
While in London he continued his involvement with the ME movement leading weekends mostly in the South-East area of the UK.
In 1983 he was appointed Provincial Leader of the Ireland-England Province of the Congregation, an appointment he held for nine years.

Following a sabbatical year in 1993, he volunteered for the Sacred Hearts Congregation Mission in Mozambique. Returning to live in Clondalkin, Dublin in 2004. For the next ten years he served as the Executive Secretary of the Irish Missionary Union and Acting Director of World Missions Ireland.
In 2014 he was appointed Co-ordinator of our Provincial and Retirement
House in Northbrook Road, Dublin where he serves to this day.