Day in the Life of Anne Knox - Nore Dragaon Paddlers

"Every cloud has a silver lining, and we wouldn't have this bond without having breast cancer" 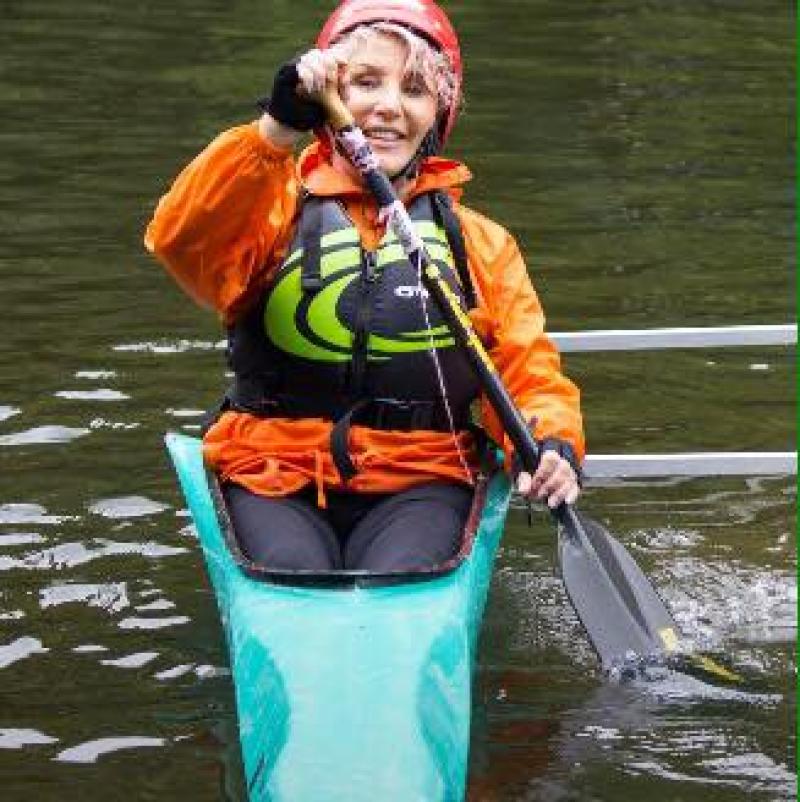 After recAnne Knox has been a member of the Nore Dragon Paddlers since they formed in 2016, after recovering from breast cancer.

Kilkenny cancer survivors take to the water in Dragon Boat twice a week. I had the pleasure of joining them on a sunny Saturday morning on the River Nore. It was some workout, and the comradery was just brilliant. 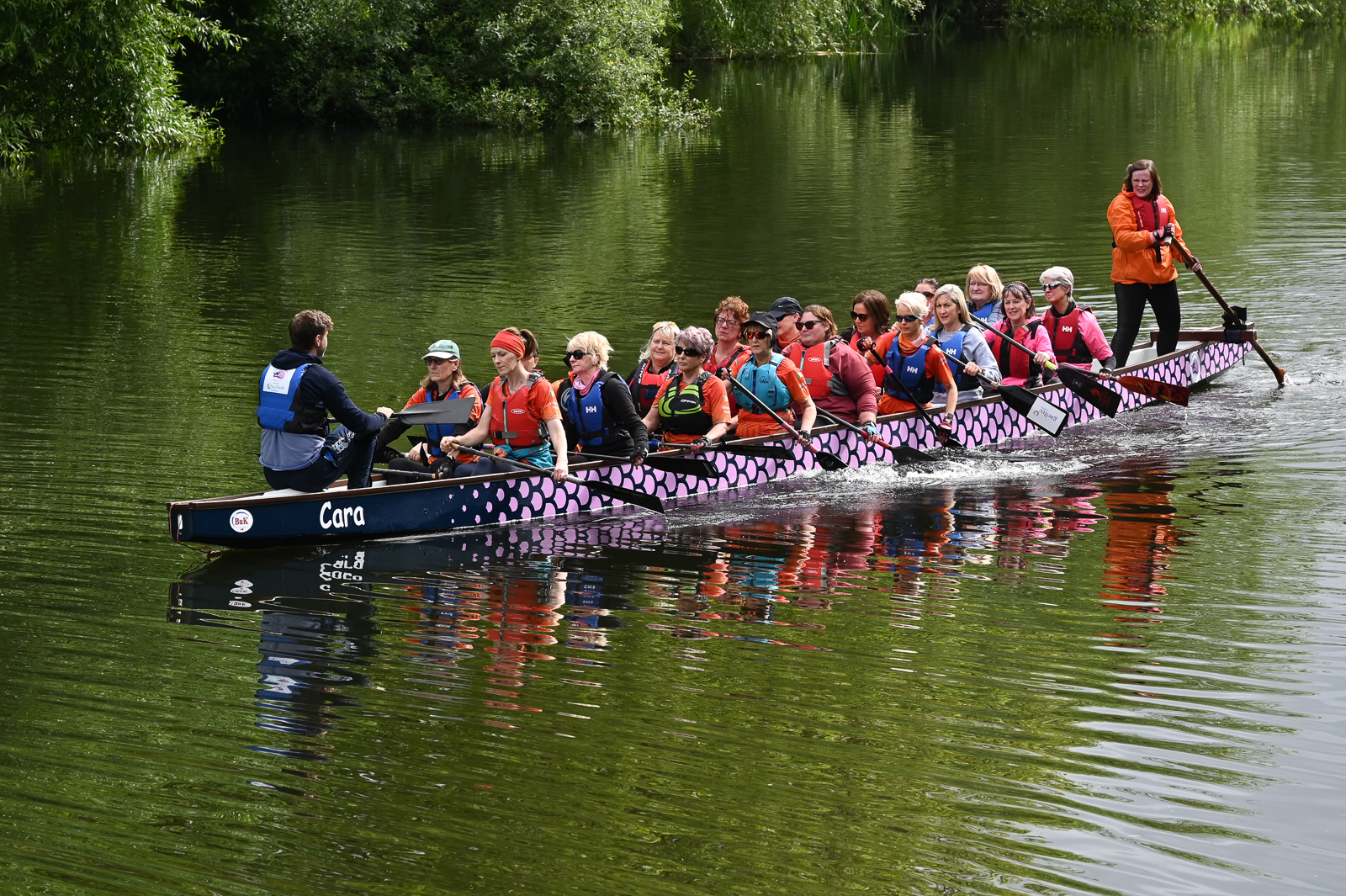 Those recovering from such a serious condition and treatment of breast cancer now find themselves exercising down the middle of the beautiful river Nore in all weathers. Members who had not exercised for years before they were ever diagnosed and now paddling on a weekly basis. I had to find out more about this wonderful group, so I caught up with one of their longest members, Anne Knox to find out what makes the Nore Dragon Paddlers so special.

Anne Knox, who many of you may know from her years in Kilkenny County Library and O’Neill Foley Accountants, is originally from Emmet Street in Kilkenny. She now lives on the Bennettsbridge Road with husband Sil. They have three children – Gary, Carol and Sylvia. Anne has a brood of seven grandchildren and one great grandchild. 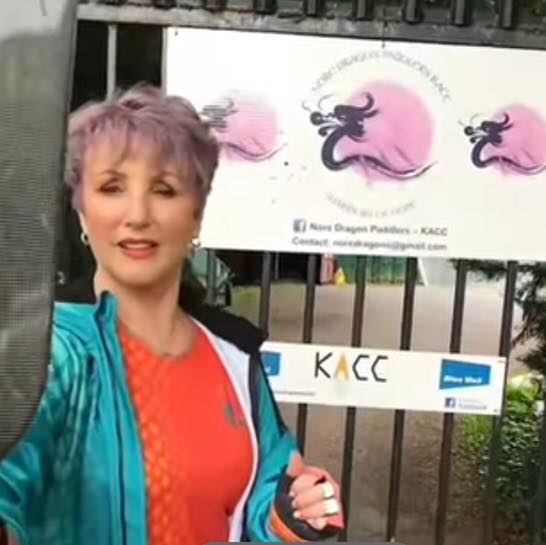 Anne was diagnosed with breast cancer in 2014. She credits dragon boating in more ways than one for giving her a new lease of life. Here is a glimpse into Anne’s very energetic world…

Anne, you are involved in the Nore Dragon Paddlers, how long have you been involved with them?

The Nore Dragon Paddlers were founded in May 2016, and I had my first paddle with them in July 2016. I was at the first meeting, and I was invited by Joanne Brennan, who's a lymphedema physiotherapist. She had contact with a lot of breast cancer survivors because lymphedema is sometimes a side effect of lymph removal from breast cancer.

Our founder member Paula had seen a dragon boat regatta on television. She was anxious to start it up.

Constantino Fiuza Castineira known as ‘Tino’ is a breast cancer surgeon from Clonmel. He took international research from Canada, implemented it in Clonmel and affected the lives of hundreds of people in the process.

The research was from Dr McKenzie in Toronto, who identified that Dragon Boat Paddling could be used as a tool to assist the recovery process for those suffering from Breast Cancer. Tino took this research, started a small group and set about creating the Suir Dragon Paddlers in Tipperary.

Tino came up to our Kilkenny meeting to tell us all about dragon boating, which I had never heard of. A group from the Waterford team joined us and with the help of the Kilkenny Canoe Club the Kilkenny Nore Dragon Paddlers was formed.

Is the Nore Dragon Paddlers just for people with breast cancer?

Initially people who didn't have breast cancer were members until we had enough members to fill the boat. Then we drew the line and said the original members could stay because there was a rule in regattas that 80% of the participants had to have had breast cancer. 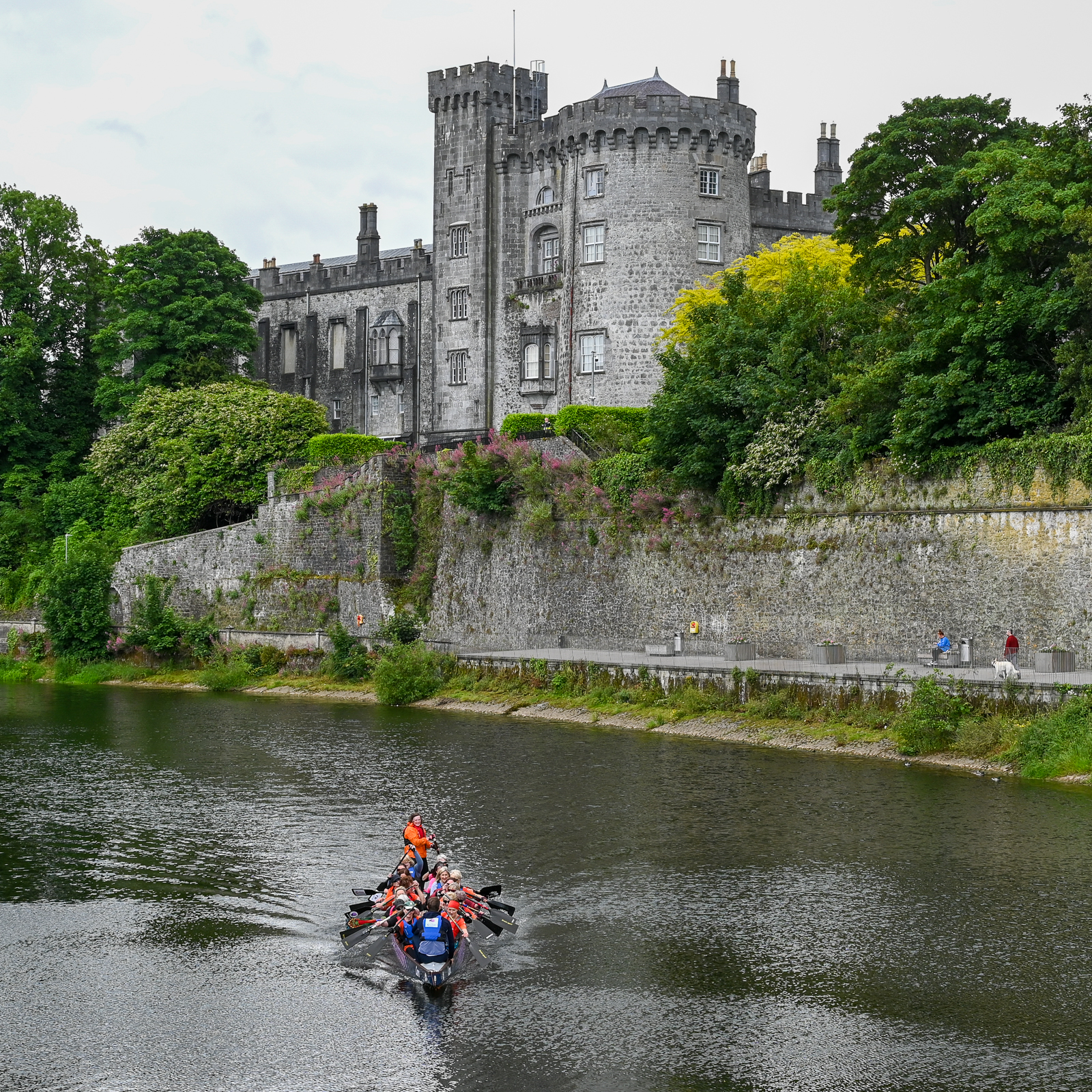 On the River Nore. (Photo by Vicky Comerford)

However, after a couple of months, Kilkenny Canoe Club formed their own club, as they had enough interest in it.  Once people saw the boat on the river with the drums, they wanted to join.

Were you always a keen water sports person or was it outside your comfort zone?

I have to say, initially it was a little bit outside my comfort zone. I am into swimming, and I had done the water safety course and the lifeguard course, but that's in controlled conditions, so it’s very different.

I think I had a bit of a fear of the river from my childhood. My parents didn't swim, and it was always ‘What lies beneath? Be careful of the currents and the holes in the river’. So, I really was a little bit apprehensive going on the boat for a while. I have to say, even though it's perfectly safe because you were your buoyancy aid and safety comes first and it very rarely tips over now, but it very rarely does.

We had a planned capsize last week with the canoe club but that's in controlled conditions. We do this in summertime in warm waters, to know what to do if it ever happens.

It took me a while to get in on the paddling because it's quite structured. I did my first regatta in the early days in Cork. I looked at the dirty water in Cork harbour and thought ‘if I fall in there and I get a mouthful of that, it's not going to end well’, but I survived!

It hasn’t stopped you either! However, Covid did put a stop to the regattas. Are you back at them yet?

We are going to the Donegal Regatta. We haven't enough members on the team to go, so I think ten of us are going we're joining eight Italian women. It will be great, as it's something new and it's on the estuary over the August bank holiday weekend.

Three other members are off to France to do a long river paddle of 25km with other European women.

How does paddling help people who have had breast cancer?

How the sport came about from research done by Dr Don McKenzie, a Canadian and a medical specialist in sports medicine.

Until his findings, women who had had breast cancer were advised not to do any weight bearing exercises on top and to be careful about lifting. Lymphedema was common, so he was looking for a way to reduce this. He was an avid paddler himself and he had heard of Dragon boating.

At that stage it hadn't started up for breast cancer, but it had gained popularity in Hong Kong. It's an ancient Chinese sport. I think the first international event was held in 1976 in Hong Kong. In 1996 McKenzie investigated it, with the view of getting women to exercise the top half of their bodies.

He formed a paddlers team and after six months, nobody had developed lymphedema. He proved the other experts wrong. Also, it wasn't just that they were physically better, they were mentally better.

The Nore Dragon Paddlers are looking for new members all the time?

It's more than just friendship within the club. It's about friendship throughout all the clubs.

We're looking for new members all the time. I think we have about six new members this year, all young girls, sadly, but we need more. Everybody that starts, loves it. You just must give it a chance. It's for all ages and all levels of fitness.

Men who have breast cancer are welcome to join us too.

How often do you do it?

Wow you must be very dedicated. How have you won any medals?

The friendships you make tops the medals. In 2019, I went to summer camp in Spain and there were teams from America, Canadians, and Cyprus. We had great fun and we are all still friends and I am looking forward to meeting them again this October in San Pedro.

Dragon boating has opened a whole new world for you with lots of health benefits. What’s the most important benefit you have received from it?

It has given me a bit more confidence in myself.

Two of our members sadly died during lockdown. Phil Chandillon was our oldest member but very, very young at heart and very fit. I once overheard her say, “you know, this paddling has given me a new lease of life”. So, I just think it was great to be part of that new lease of life that she had. 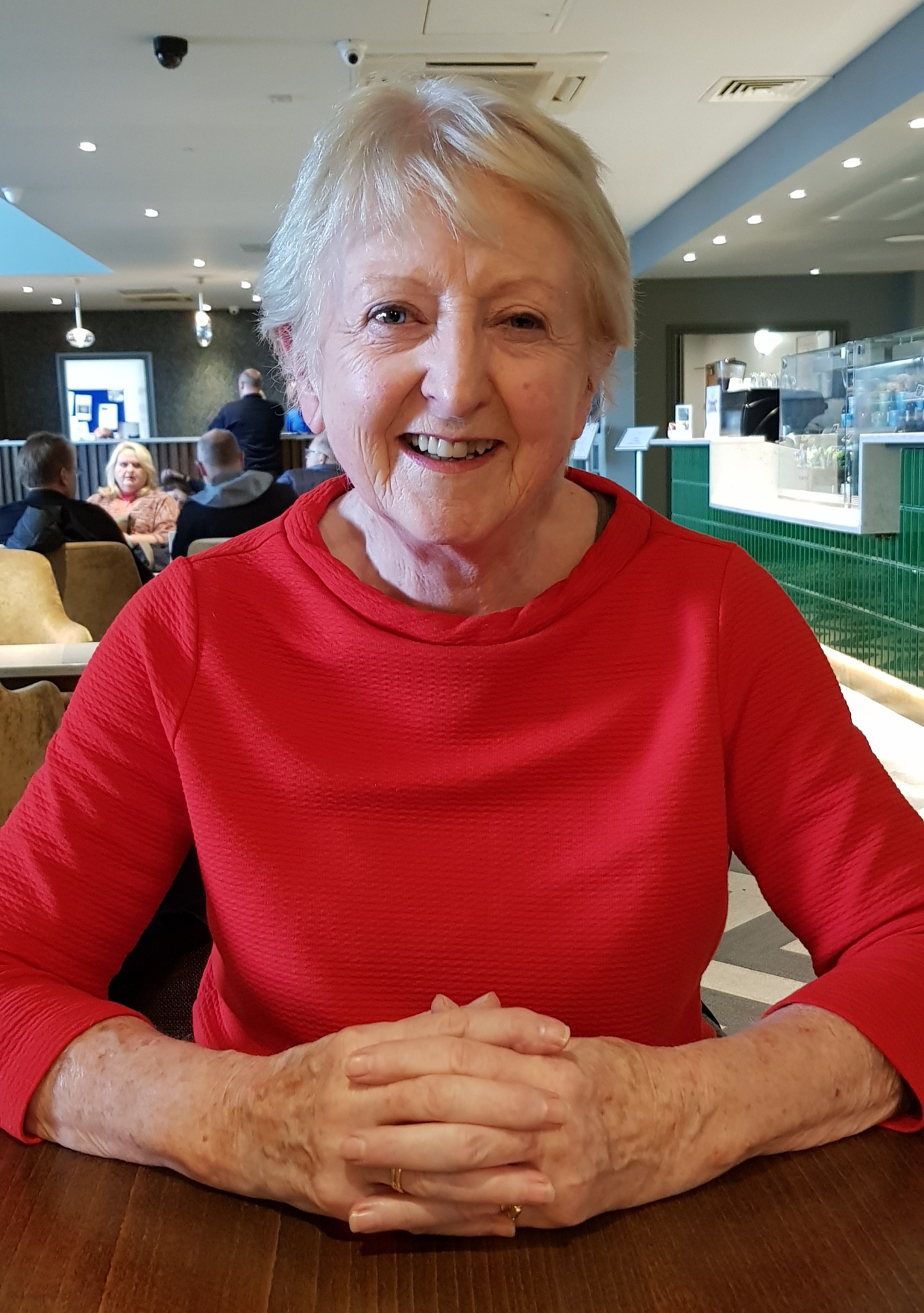 Our other member was Colette Dalton. She was an avid paddler, and she came with us to Vienna, and we stayed a few more days and went to Bratislava and had just such a lovely memory.

It just shows there is a positive in everything.