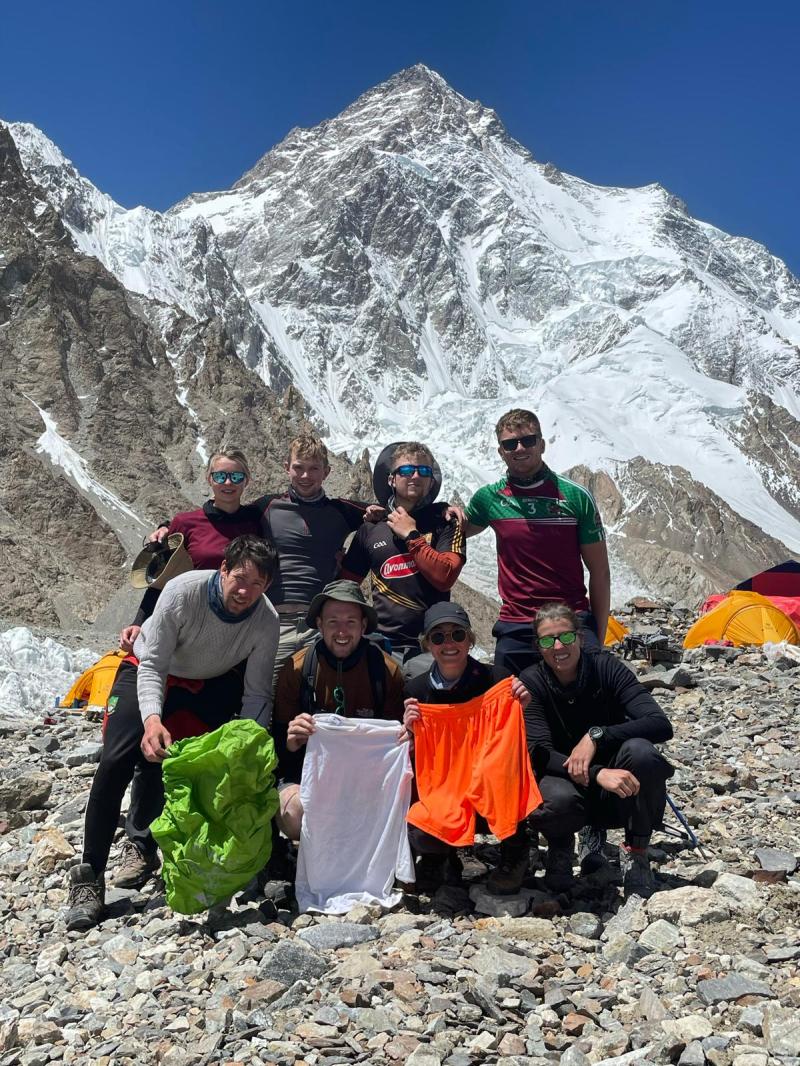 A Kilkenny man who recently trekked to the base camp of K2 has described it as the ‘adventure of a lifetime’.

Rob Boyd from the Castlecomer Road in Kilkenny City recently returned from the once in a lifetime trip. Prior to the expedition the furthest Rob had hiked was to the top of Mount Brandon in South Kilkenny.

Rob was one of a group of five Kilkenny people who took part in the epic adventure along with Brendan, Eileen and Michael Fitzgerald from Urlingford and John Mulhall from Muckalee. The group are aged between 22 and 34 and three of them had previously trekked to the base camp of Mount Everest.

“My friend Brendan came to me in December and told me about the idea. Eileen was the main planner of the trip and when I found out I said that I would probably never get the opportunity again so I decided to go for it,” said the 22-year civil engineering student.

Although Rob has no trekking experience he is fit and plays rubgy and is planning on going back playing hurling.
The group arrived in Islamabad in Pakistan in early June and made their way to the city of Skardu.

“You can’t organise anything in Pakistan because of the weather,” said Rob explaining that what should have been a 45-minute flight turned out to be a 26-hour drive over ‘a highway’.

“If the visibility is low they can’t fly so we had to take the highway. It is not a highway as we know them, it is for the first quarter of the journey and then it turns into basically a dirt road, it is very remote.

“It was a bit nerve-wracking the drive from Skardu to Askole, which is the nearest village to where the trek to the base camp of K2 begins.”

“The trek up to the base camp took us 13 days and we camping along the way. Porters and mules carried our bags and camping equipment. It was absolutely amazing but it was tough going on the glacier at times as it is always changing and you are constantly going up and down hills,” he added.

There were 19 in total in the group, from all different nationalities and the Kilkenny contingent were at the front of the pack.
“ Four of the five of us were taking Diamox, a medication that helps reduce the symptoms of altitude sickness. It helps you to get more oxygen into your body and allows you to get rid of carbon dioxide and to breathe deeper. The rest of them weren’t taking it and I think it made a difference.”

Rob said that the whole experience was ‘absolutely brilliant’ adding that having to digitally detox had its benefits.

“There was no service on the phone and it really resets you. Normally you can waste hours in the evening on the phone but over there we had dinner, played cards and went to bed at 8pm,” he added.

“I would definitely do another trek, it was a deadly experience and I had great craic and I met some brilliant people. The hardest part was getting off the mountain because of the fine weather. There was a river and some of the flooding washed away the roads so we were not able to cross.

“One night we had to stay in an abandoned polio hospital and there was talk of evacuation from the mountain. The people of were so friendly and helpful and even though they don’t have much they were bringing us bottles of Coke and bombay mix. In the end we managed to get down by going over makeshift bridges and a suspension bridge, some of which was washed down and we had to use it as a ladder,” he said adding that the group were delighted to make it to the other side and to safety.