The Secret Garden exhibition preview gets off to a successful start 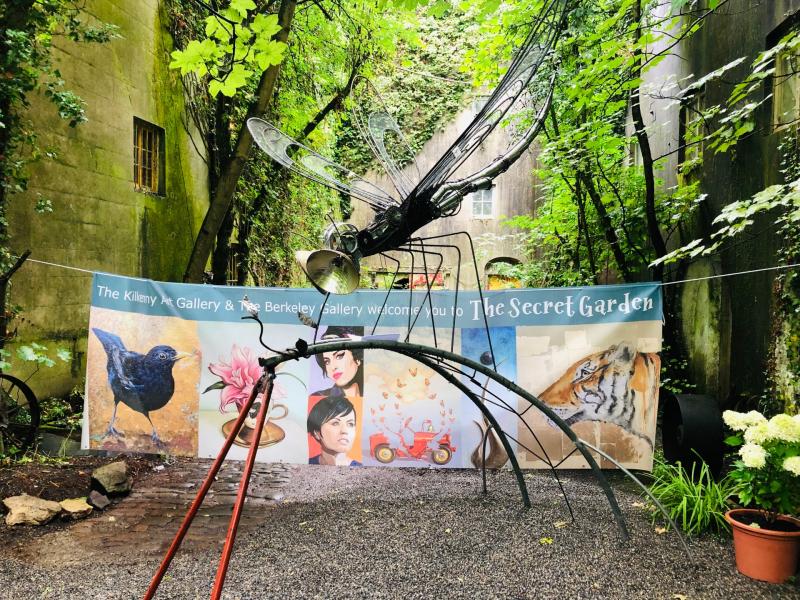 A preview of The Secret Garden Exhibition unveiled on August 1, at Grennan Mill, Thomastown by Newstalk Presenter Kieran Cuddihy, in advance of the 2022 Kilkenny Arts Festival has already been successful with notable sales.

At the preview, Kieran Cuddihy recognised the central role played by the visual arts and the creative community in Kilkenny. He complimented the exhibition organisers on the diverse and striking collection of original paintings and sculpture that feature in exhibition at The Berkeley Gallery.

Visitors to The Secret Garden Exhibition preview viewed a magical outdoor sculpture garden featuring new original works from some of Ireland’s foremost contemporary sculptors. One dramatic piece drawing fascinated onlookers, was a giant sculpture, Dragonfly created from found objects by Frank Hallinan Flood, which was recently selected and shown at the 192nd RHA Exhibition in Dublin. The piece won The Goodbody Award for a work of distinction in any medium at the Sculpture in Context exhibition 2021 in the National Botanic Gardens of Ireland.

The Dragonfly has now found a permanent home in Kilkenny as it had been purchased by Susan Mosse of Kilfane Glen and Warerfall, where it will sit perfectly amongst the lush greenery and planting of the historic romantic landscape. It will be the perfect home for the dramatic nature inspired work.

Hallinan Flood enjoyed a distinguished career in theatre and film before becoming a full time visual artist having worked at the Abbey Theatre and on films including The Field. He was born in Dublin and left school at 14 to work in a sheet metal factory for two years. Having been temporarily blinded while welding he became a clerical officer in the Civil Service.

Frank studied painting under John Skelton at the Peoples College, Dublin and was later awarded a four year, full time scholarship to the National College of Art  and Design. While there he was awarded the Di Marco Touring Bursary and travelled in Europe. After graduation he was awarded the The Robert Smithson Memorial Scholarship at Brooklyn Museum Art School, New York, under sculptor Toshio Odate. He was co-ordinator of a large environmental sculpture for  Barry LaVay at ArtPark, New York State. When he returned to Ireland he won various bursaries and residencies.

He was awarded the Lenox Robinson Bursary to study set design at the English National Opera Design School, London. He began his theatre career at the Abbey Theatre rising to Head of Design Department. Subsequently he became an award winning freelance designer for stage and film. His stage work has been seen in major Irish theatres and internationally, including the US, Australia, Great Britain, Canada and Israel. He won the Helen Hayes Award for Best Set Design for Juno and the Paycock in Washington DC.

Film work includes art direction on such films as The Field, Far And Away, Da and A Man Of No Importance. He was production designer on the movie Snakes and Ladders filmed at The Babelsberg Studio, Berlin, the oldest film studio in the world.

He resigned from theatre design work in 2000 and has worked as a visual artist since then. Not one to rest on his laurels, Frank continues to create inspiring and distinctive art and now Kilkenny will be home to one of his most successful creations.