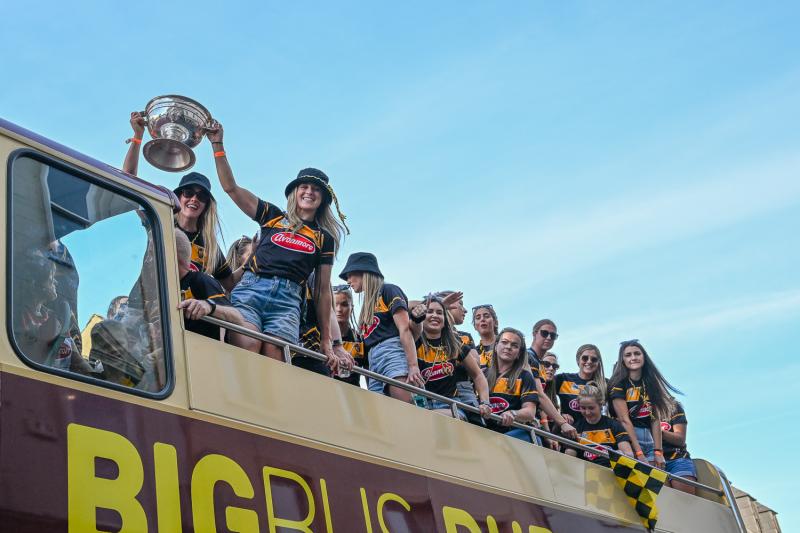 A huge well done and congratulations to our camogie team who overcame a ferocious Cork challenge on Sunday to emerge All-Ireland champions.

As well as the skill and athleticism on display, there was a never-say-die attitude from the team that shone through. When Cork roared back into the game before half-time, it would have been all too easy to let the heads go down, with the momentum swinging the Rebels’ way.

The team showed their character, however. The girls never stopped believing and continued to fight for every ball, defending like tigers, picking off their points and pouncing on goal at a crucial moment.

The whole county was behind them, and it was very much reflected in the numbers that showed up at Kilkenny Courthouse to celebrate with the players on Monday. It was great to see such a fantastic turnout at the homecoming when they received their richly-deserved plaudits and cheers from supporters.

The streets were absolutely thronged with black and amber supporters, children excited to see their heroes, and their silverware held aloft.

The bunting will soon come down, but the O’Duffy Cup will stay Noreside until next year. Along with the football and the under-20 hurlers, that’s three All-Irelands for Kilkenny this summer. All things considered, it’s been a hugely successful year for the county on the sporting front.

The new boss
Best of luck to new Kilkenny senior hurling boss Derek Lyng as he takes the reigns of the youthful and talented team. Many younger supporters — and indeed, members of the panel — do not remember a Kilkenny without Brian Cody at the helm. Now a new chapter for the county begins.

Derek had an exemplary playing career and has copperfastened it with a decorated management career to date with the under-20s. We wish him all the best in his new role.