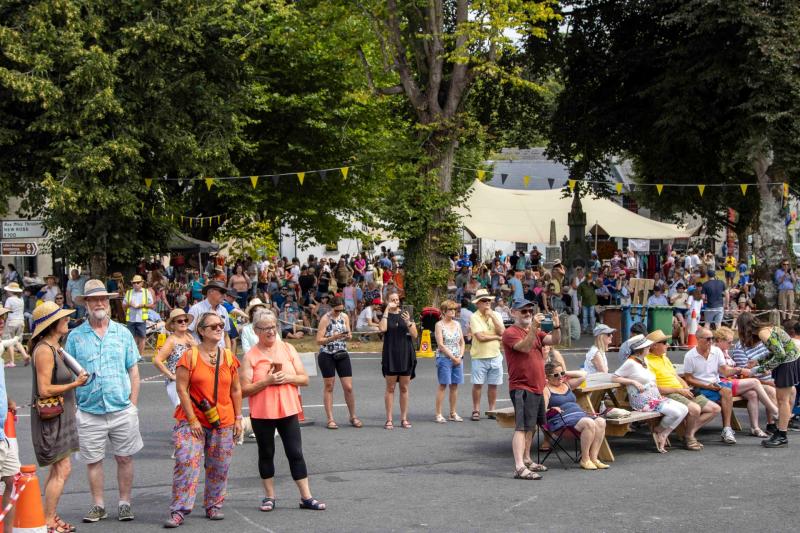 Crowds flocked to celebrate in the glorious sunshine in the beautiful village of Inistioge over the weekend for the inaugural Keep Her Lit Festival.

A commemorative healing nature walk for people who lost a loved one recently opened the Keep Her Lit festival on Saturday morning. Led by forest school practitioner Maura Brennan and Kasia Kaminska. All in attendance enjoyed a beautiful walk along the River Nore that closed with a remembrance mandala in the village square.

The Cork born musician shared stories and songs from Cork, Clare and Donegal. Lisa O’ Neill took to the stage next, accompanied by Mick Geraghty on piano. The pair played to an attentive audience and a packed house. O’ Neill paid tribute to Dave Donohue and Johnny O’ Donnell. O’ Neill also played a beautiful version of Tom Waits song ‘Innocent When You Dream’ in their memory.

Hundreds of market and music lovers turned out on Sunday morning for day two. The Keep Her Lit craft and food market opened with an impressive lineup of local and visiting craft-makers and traders including delicious tacos from Xica, Goatsbridge trout, The Fermentary and Inistioge local Fiona Cullen plus Grennan Mill Graduates The Green Angel, BullDog Design, MadGra Vintage and Geoff Kirk.

On Sunday evening, Galway based Brigid Mae Power took to the stage at Cois Abhainn and played a beautiful opening set. Dublin based, Galway born singer Niamh Regan closed the final concert of the weekend and praised festival organisers for the wonderful community spirit surrounding the weekend.

Dave Donohue’s closest friend, musician Tony Davoren traveled from America for the weekend.
The weekend was a beautiful array of talent, music workshops for all ages led by Kilkenny musicians, unforgettable moments and an atmosphere that was filled with community spirit and Grá for Dave Donohue and Johnny O’ Donnell. Stayed tuned for Keep Her Lit 2023 news.