Originally from Ballykeefe Castle, Peg enriched the lives of many 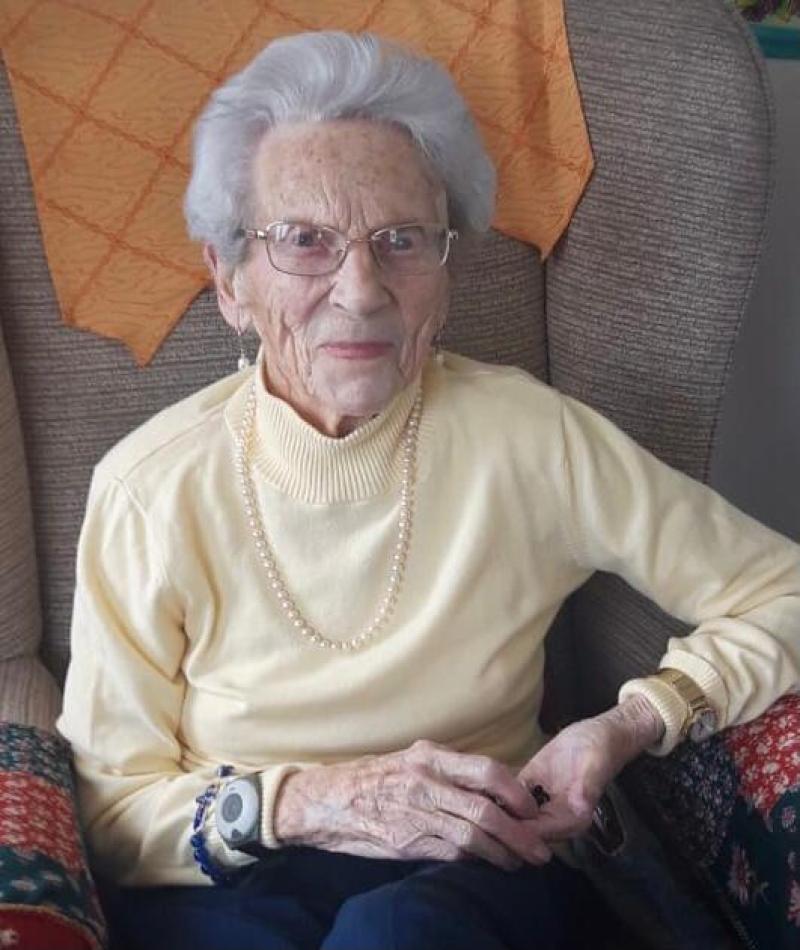 A large gathering joined with the family of the late Peg Bermingham at St Michael’s Church, Mullinahone on July 22 to bid a fond farewell to the adored family woman and proud Kilkenny native who had died two days previously in her 101st year.

The sweet strains of You Are My Sunshine, one of Peg’s favourite songs, rang out in tribute to a life which had enriched the lives of people from the foothills of Slievenamon to places as far and wide as Oklahoma, San Francisco, New Zealand and Oman.

To many, Peg’s sense of humour and caring nature had made her presence like a ray of sunshine in their lives.
A lifetime recalled in both song and story during Peg’s funeral mass referenced how she was born at Ballykeefe Castle on October 28, 1921. She grew up on the family farm alongside older brothers Paddy, Bill, Michael and Dan and made many memories attending Desart National School and later the Brigidine Convent in Abbeyleix, Co Laois.

As Peg grew older, she relished the time when she could attend dances at local platforms and The Mayfair Ballroom, Kilkenny. It was at such an occasion that she would meet the Tipperary man she would go on to marry in 1955 – Gerald Bermingham, of Mullinahone.

After the couple wed, Peg moved the short distance across the county boundary to begin the next chapter of her life. Children Marie, Edette, John and Thomas (Tom) arrived in subsequent years to complete the family. Peg embraced life in Tipperary, yet remained faithful to all things black and amber and always kept up with the news from her home parish.

The 1960s and early 1970s were a busy time of school, farm and community life and cherished visits to the Bermingham home from family members, neighbours and friends. Like many women of her generation, Peg was innately gifted in the art of running a home. From a time before electric appliances were at hand to assist, she had provided sustenance and ensured every need was tended to. Her heartfelt dedication to her family and community endured for over a century of life.

Family champion
When Gerald’s health experienced a significant setback in the mid 1970s, Peg was the family’s champion. Her steadfast care and support to her husband over many years up to his death in 1980 was matched by her determination to ensure their four teenage and young adult children continued to thrive.

Throughout her life, Peg enjoyed cooking, baking, knitting and other crafts. She also took part in local amateur dramatic productions, including a pageant to mark the centenary of the death of writer Charles J Kickham.

Peg played an active role in the running of the Mullinahone branch of the Irish Countrywomen’s Association over many years and was also a committed member of the local Community Council, Kickham Centenary Committee and subsequently the Senior Citizens Club. She was delighted to be involved in the groups and it was there that she formed many cherished friendships.

On one occasion in 1990, Peg and her friends at the Senior Citizens Club featured on the RTÉ One Live At Three afternoon programme – a clip of which can be viewed on YouTube.

A new chapter began to unfold in Peg’s life from the 1980s onwards, as her nine grandchildren began to arrive. She delighted in the activities of each one and, in turn, was an inspirational and much-loved Nannie. In very recent years, she was thrilled to welcome the arrival of four great-grandchildren.

Peg so looked forward to celebrations that gathered everyone together. Her 100th birthday in October 2021 arrived amidst the Covid-19 pandemic, yet was nonetheless a very special occasion – topped off by congratulatory letters from President Michael D Higgins, Taoiseach Michéal Martin, family friend Minister of State Malcolm Noonan and good wishes from far and wide.

Peg remained living at home and enjoyed good health throughout her life, supported by family members and friends who were dear to her – including care assistants Marie Maher, Trish Matthews and Róisín Cleere and Fr Danny O’Gorman, PP.

She greatly appreciated and enjoyed the company of all who came to visit her and would sit in her fireside chair, sharing stories and reminiscing about fond memories from 100 years of a remarkable life. Her resilience, support, warmth and wit will be sadly missed and lovingly remembered by all who had the pleasure of knowing her.

Peg always appreciated the significance of kindness and community support and this was specially recognised as members of the community formed a guard of honour along the route of her journey to St Michael’s Church mortuary in Mullinahone. The beautiful music performed at Peg’s funeral mass was played by her son John, grandson Seán and family friends Billy Carrigan, Billy Barron, James Rice, Martina Carrigan and Caoimhe Carrigan.

Following the ceremony, Peg was laid to rest at St Michael’s Cemetery, Killaghy, Mullinahone. May she rest in peace.