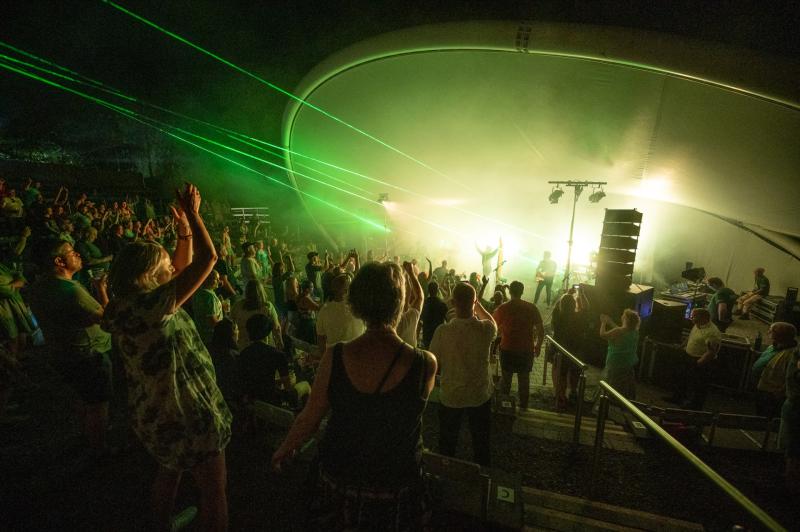 Where else would you see other than at a King Kong Company gig?

After entertaining the masses at the recent All Together Now and Spraoi festivals in Waterford, King Kong Company rocked the unique the Ballykeeffe Amphitheatre earlier this month. They are undoubtedly one of the most vibrant, electronic dance bands in Ireland. The songs, the sounds, the lasers and the lighting are crafted for a live show and the legends of the South-East did not disappoint, delivering a no holds barred set that had all in attendance in the glorious amphitheatre atmosphere transfixed by their sonic boom.

The venue was at full capacity as the band took to the stage and soaring temperatures had the crowd at fever pitch before a single note was played. Once the music started the atmosphere was immediately transform as the usually seated stadium jumped to their feet tossing away any inhibition they were clinging to. Taking influences from reggae, drum and bass, trance and ska filtering into the unrelenting electronic groove King Kong Company have created a sound that is almost entirely their own. Every track is a thumping yet melodic feast that is impossible not to dance to.

Over the course of the ninety minute spectacular we were treated to a full hit list including ‘Harvest’ to ‘Forest’ and ‘All Been Done Before’ with Aisling Browne on lead vocals. All of this coupled with Trish Murphy’s multiple eccentric costumes and the frantic projected visuals make for an experience that unabashedly based around creating an atmosphere as unique as the venue itself. As the evening light began to fade and darkness descended it only helped to intensify the scene culminating with a musical, laser and lights extravaganza with an encore of ‘The Crab’, ‘Zoids/Pol Pot Rock’ and closing a brilliant night with ‘Get Away’.

What an amazing venue Ballykeeffe Amphitheatre is and it’s maintained on a voluntary basis. Nestled at the foot of the old Ballykeeffe Quarry, Kilmanagh, it brings the unique atmosphere of an open-air Italian theatre style venue to the quaint Kilkenny countryside.

In the late 1990s, a team of dedicated volunteers recognised a unique potential which was brought to fruition through hard work and in the year 2000 the amphitheatre proudly played host to the first of many performances.

KBK (Kilmanagh, Ballycallan, and Killaloe) Enterprise which runs the Ballykeeffe Amphitheatre was founded in 1986 by a group of local people in order to develop and promote community development. The Enterprise Group is a company limited by guarantee; having charitable status. Under the organisation rules, no individual may make any profit from the organisation and there is no private gain.

Currently the enterprise group has a board of 10 and membership of fifteen to twenty people. Expenditure to date amounts to €250,000 of which €200,000 Has been grant aided by various bodies such as the Department of the Arts, Culture & Heritage, B.N.S Leader and Kilkenny County Council.