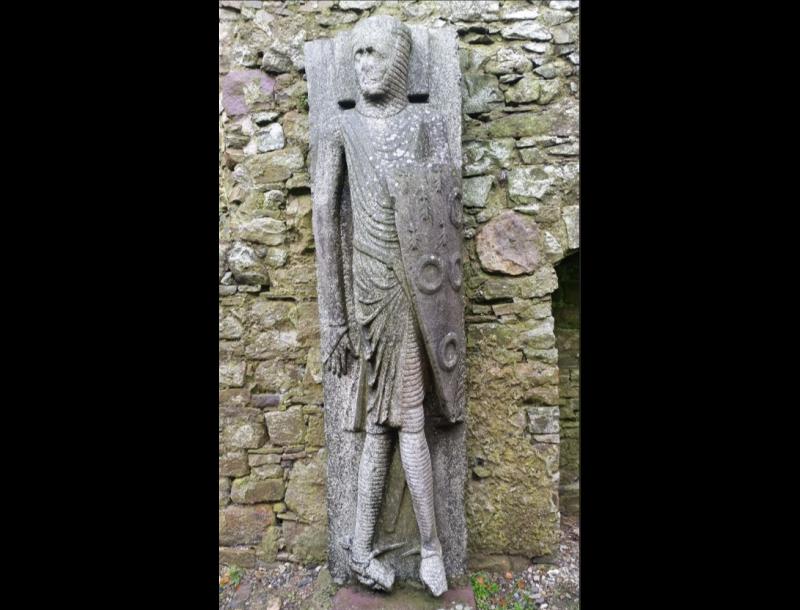 Concealed down the end of a peaceful country lane in south Co. Kilkenny is the ruin of a 14th-century church. Tumbledown yet charming, the church itself is picturesque and interesting but within its walls stands something truly unique, and unexpected. Carved out of limestone and standing almost 8 feet high against one of its ancient walls is a 13th century effigy of a Norman knight. The Long Man of Kifane or Long Cantwell.

It’s thought that this effigy was once the lid of a sarcophagus but it has been propped against the wall of Kilfane Church for living memory. It’s the tallest effigy of its type in Ireland and the UK, and is impressive not only for its scale bur also for the skill of its creator. The knight is handsome, beautifully dressed and cuts a distinctive dash.

The figure known as the Cantwell Fada is also colloquially known as the Long Man. The effigy is finely and intricately carved from a single slab of limestone. The medieval knight wears a metal skull-cap covered by a coif, and a chainmail hauberk protecting his torso as far as his knees. It is under a cloth surcoat with deep folds and a sword belt. He has prominent spurs on his feet, suggesting that he fought on horseback. His legs are crossed, the right leg over the left, which was once believed to show that he took part in the Crusades, but is now considered merely a stylistic convention. In his left hand is a large shield bearing the arms of the Cantwell family. The figure is believed to depict Thomas de Cantwell (d. 1319), a Cambro-Norman adventurer who became Lord of Kilfane in KIlkenny.

The Cantwell family's main castle, Cantwell's Castle is situated in the southern part of the townland of Sandfordscourt, formerly known as Cantwellscourt, approximately 7.5km from Kilkenny City. The Cantwells arrived in Ireland with Strongbow, the first one mentioned in 1177 was Hugh de Cantwelle. They were possibly from Suffolk. At the time, surnames as such did not exist, so spelling variations of "Cantwell" also include "Conteville", with "Cantuell" being the oldest form. The Cantwells were later transplanted to Connaught by Cromwell.

Once settled in Ireland, they held lands in the parish of Rathcoole (which Sandfordscourt belongs to), Cloghscregg (northeast of Thomastown, Co. Kilkenny), Stroan (Kilfane near Thomastown), and also in Tipperary. The stone effigy is thought to originally have been a sarcophagus slab which would have lain horizontally but has since been set upright against an inner wall of the church. The statue represents an example of the high standard achieved by Irish sculptors in the Pale prior to a later cultural and economic decline after the Bruce invasion and the advent of the Black Death.

Hubert Butler, the renowned Kilkenny essayist from Bennettsbridge, recalled the local story that children at the nearby Protestant school were sometimes punished by having to kiss the statue, who at one time lay in the corner of their schoolroom.

Paris Anderson, one of the founders of the Kilkenny Archaeological Society, wrote about Thomas de Cantwell in his Warden of the Marches. Around 1335, he claims Cantwell was the terror of local Irish families such as the O’Brennans, O’Nolans and MacMurroughs . He was said to have been morose and gloomy, the result of an unhappy marriage to Beatrice Donati in Florence, whom he had met on his way to the Crusades.

He subsequently brought his Florentine bride back to his castle in Kilfane but their initial passion faded after a short while and she soon found other company in Kilkenny. She befriended the notorious Alice Kyteler, who was later arrested for witchcraft at the behest of Bishop Ledrede. This bishop had a fanatical obsession with witches and witchcraft and Beatrice was arrested and placed in the dungeons of Kilkenny Castle.

Shockingly, her husband Thomas Cantwell was her jailer. Beatrice with an accomplice, De La Freine managed to escape and got to Graig Abbey (in Graignamangh) where they were given sanctuary. Then five months later Cantwell managed to capture them both – De La Freine being killed and Beatrice condemned back to custody. While she was being brought to the fortress of Rathcoole, Cantwell’s Court near Gowran, Beatrice managed to stab her husband, who had captured her, in the heart with a gold bodkin – a type of hairpin. The wound was fatal. Beatrice failed to escape, despite the attack and was subsequently imprisoned in Kilkenny Castle. She then faced two charges, the first of murdering her husband, the second of heresy. She pleaded guilty to the first but not the second.

Before Beatrice could be tried, she died in custody – reputedly a victim of her own "passions" which is probably shorthand for suicide.

These dramatic events seem a lifetime away when you observe the serene and solitary Cantwell Fada today. The tumultuous nature of his life and death now forgotten in the mists of time, while his effigy stands tranquil guard over the idyllic, ruined church of Kilfane.