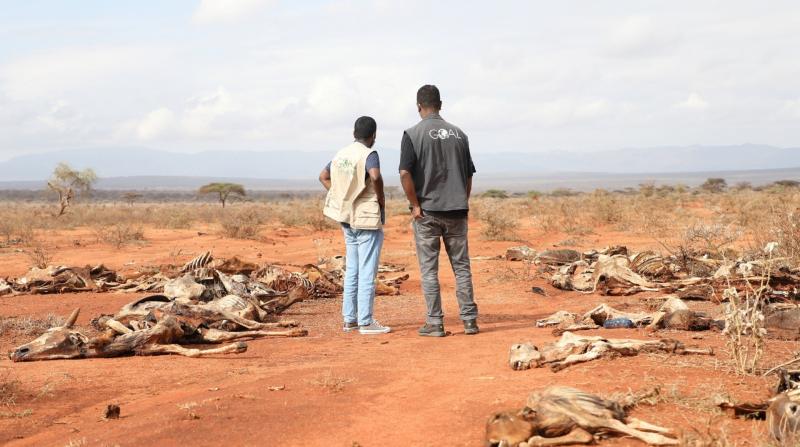 A humanitarian crisis on a mass scale is unfolding rapidly across East Africa.

This is being driven by climate change leading to a fourth failed rainy season in Ethiopia, which has resulted in severe drought, deemed the worst in 70 years.

All of this has meant significant livestock deaths, dire water shortages, repeated crop failures, and food shortages. This is exacerbated by increased regional and local conflict in addition to the war in Ukraine which has disrupted wheat supplies and caused soaring food and fuel prices. These conditions have caused far-reaching displacement of families who have exhausted all of their personal resources and have to move to find food, water and shelter to stay alive.

GOAL has been responding to crises and protracted humanitarian needs in South Sudan, Sudan and Ethiopia in East Africa since the early 1980’s while planning for and investing in communities’ longer-term development. But the GOAL teams in those countries are now reporting a situation so dire that available support is being overwhelmed

In South Sudan, catastrophic levels of food insecurity are being reported with over 60% of the population without enough to eat. Half of South Sudanese population, almost eight million people, are expected to experience crisis levels of hunger in the coming months
In Sudan there are already 2.5m IDPs (Internally Displaced People) mostly in Darfur and South Kordofan, where GOAL operates. Sudan continues to face a critical food and nutrition situation, with 40% of children under five years are underweight and up to 19% of pregnant and lactating women are undernourished

In Ethiopia high levels of acute food insecurity persist especially across the northern region of the country at a time when pre-crisis malnutrition was already on the rise due to Covid-19 and desert locust infestation. Failure of rains and prolonged drought has meant that up to 70% of crop have failed whilst roadsides are scattered with carcasses of dead livestock
Speaking about the extreme hunger crisis in East Africa, Deirdre Keogh, GOAL’s Regional Director for East Africa said ‘“This humanitarian crisis could be on a scale we have not seen in a generation or more. The numbers of people at risk of extreme hunger have more than doubled in the past year. GOAL teams are on the ground in camps for IDPs treating the underlying causes of malnutrition and treating those presenting with severe acute malnutrition. Our teams are supporting stabilization centers and providing a significant amount of medical aid, in addition to food baskets for families, basic sanitation and shelter. But we desperately need help to do more.”

Also speaking about the response to the extreme hunger crisis, GOAL’s Director of International Programmes, Joanna Reid said “Our ongoing programmes in South Sudan, Sudan and Ethiopia are funded by an array of international institutional donors including Irish Aid, EU, USAID, ECHO, WFP, OCHA and UNHCR. Some grants from institutional donors such as Irish Aid, also contain ‘crisis modifiers’ - systems which allow GOAL teams to explore options with funders to redirect funds to the crisis, outside of current aid contracts.”

“But we are appealing for support from the ever-generous Irish public for on-going funding specifically to deal with this crisis. We also expect a fifth season of poor rains and that this severe crisis and drought will extend well into 2023. So please donate whatever you can via goal.ie” continued Joanna Reid.

To donate go to https://www.goalglobal.org/