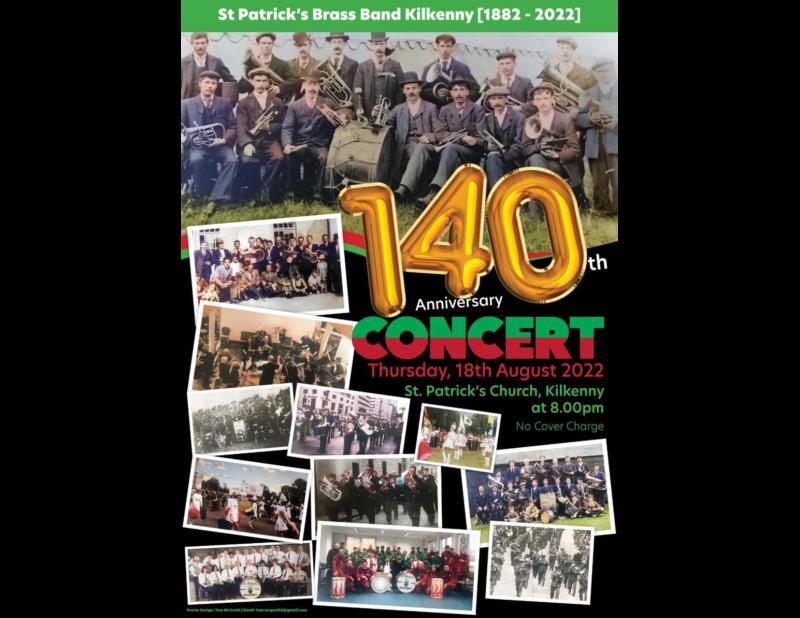 One of Kilkenny's most beloved institutions, St Patrick's Brass and Reed Band will celebrate their 140th anniversary this evening with a free concert at St Patrick's Church at 8pm. The band was first founded in 1882 and this year celebrates 140 years of music making.

The band has performed at many major moments in the history of the city during that time, most notably they paraded the Irish Volunteers to James Stephen Barracks when the barracks was handed over to the Irish Free State in 1922.

The band has regularly performed outdoor at venues around the city including the Town Hall and Kilkenny Castle (for its Music in the Gardens series) and of course, multiple St Patrick's Day parades. Their Christmas and summer concerts are regular highlights for music lovers of all ages. Initiatives like busking outside Kilkenny Castle by the junior band, have always been warmly received by locals who appreciate the melodies the band bring to Kilkenny streets.

The band has both a junior and senior membership which spans the generations. There are both grandparents and grandchildren playing for the band, ensuring that its musical legacy remains vibrant and enduring. Their music brings people together and forges a sense of community spirit that is beneficial for all.

The concert promises to celebrate not only St Patrick's Brass and Reed Band's musical skill but also their immense contribution to the social fabric of Kilkenny and the joy they continue to bring to the music lovers of the city.

Concert at St Patrick's Church at 8pm. Admission is free.