How Kilkenny Castle parklands and gardens have evolved through the generations 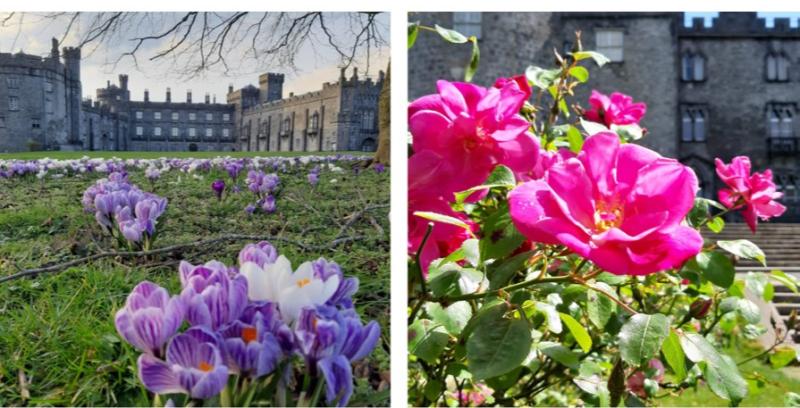 The secluded and serene rose garden in the grounds of Kilkenny Castle is an oasis of calm in the city centre. Sitting amongst the fragrant blossoms, it is hard to imagine that this space once faced a slum. There was no garden in the the grounds until the 1600s and the castle was surrounded on three sides by a defensive moate. A talk delivered this week by Kilkenny Castle guide Marie O Driscoll for Heritage Week, revealed just how much the parklands have evolved over the centuries.

At the beginning of the 16th century, Kilkenny was a medieval walled town dominated by St Canice's Cathedral to the north and the castle to the south. In 1609 Kilkenny was elevated to city status by a Royal Charter granted by James I of England. Back then there was a thoroughfare called Boyce's Lane which ran from St Canice's Cathedral right up though the town to the castle. The surrounding environs were far less salubrious then– there were tenement house in the locality and while the castle was elevated, the grounds were more practical than decorative.

When James Butler who was successively Earl, Marquess and Duke (1610 -1688) was made Ireland's first Duke by Charles the II, (after being in exile on the continent with him), he was the first Marquess of Ormonde. King Charles I had appointed James head of the army in 1641 and in 1643 he appointed him Lord Lieutenant – the highest government position in Ireland.

The Phoenix Park in Dublin was laid out by the Duke of Ormonde as Lord Lieutenant. Splitting his time between Dublin and Kilkenny, it is likely that the creation of The Phoenix Park might have influenced how James re-designed the grounds of Kilkenny Castle. Certainly, as James spent 12 years in exile in Europe he would have seen the formal geometric gardens at Versaille and absorbed their influence. As was common in aristocratic gardens, the flower beds of Kilkenny rose garden were first created to be observed from above, from the castle windows. The decorative fountain which sits at the centre of the rose garden dates from the 1670s and anchors the design, emphasising its status as as a pure pleasure garden created for enjoyment .

This geometric garden with axial paths radiating from the central fountain retains much of the basic form that existed during the ducal period. Two antique statues stand on pedestals near the castle: one is of Hermes, after the original in the Vatican Collection, and the other depicts Diana the Huntress.  All of the garden features, including the terracing, have been extensively restored.

The original creation of the Parade outside the castle involved moving soil levels so the adjacent tenements were knocked and cleared. On the inside of the walled rose garden it is noticeable that the ground is higher outside so that the park is sunken and therefore more private. Back then the Parade was a private space too – as its name suggests, it was used for drilling soldiers and may have been influenced by the design of Italian plazas.

One of the defining features of Kilkenny Castle parklands is the beautiful variety of trees. The trees which line the inside of the park wall facing the Parade were once known as the chestnut grove and were more numerous. It is hoped that more chestnuts may be planted in the future to revive this name. The lime trees in the area are particularly striking:  some are nearly 300 years old. At the back of the rose garden, there are evergreen oak and old yew trees. Down at this as the area which is semi -wild, there is a resident fox.

Throughout the park now, there are many wildflower meadows to encourage bio-diversity. Over the centuries, the planting of the gardens changed with changing horticultural styles – the original gravel garden with box hedging being replaced by rose gardens and today the addition of wildflower meadows. A garden is a living thing but when the OPW took over the gardens they were in “rack and ruin” according to guide, Marie O'Driscoll. The rose gardens were redesigned by Sydney Mescal, who worked on the formal gardens at Kilmainham using a cruciform shape and were planted with a variety of rose species including hybrid tea roses and floribunda varieties.

Where the Castle Gardens estate now sits were 2 additional large walled gardens that also had an orangery and fruit trees. Indeed the larger castle gardens were quite self sufficient and when the family were in London they had fresh food from Kilkenny sent over by train weekly. Photos in the castle from the Lawrence Collection actually show livestock grazing in the parklands of the castle.

After the Castle was taken over by the Office of Public Works, new entrances were created to give access to the park. The entrance near the Parade Tower has nineteenth-century cast iron gates that came originally from St. Stephen’s Green, Dublin. The open parkland to the south of the castle was replanted with an emphasis on trees and shrubs to give year around colour.  Pathways were also restored and some extended.

Today the rose gardens and the parklands are an invaluable amenity enjoyed by all the people of Kilkenny as well as the hundreds of thousands of visitors who explore the castle annually. The care of the castle grounds is ongoing for the OPW who tend it with a team of 6 gardeners and maintenance workers.

The legacy that the Butlers left when they handed over the castle and grounds to the State in 1967 for a mere £50 is now beyond value. Kilkenny Parklands are a unique and much loved amenity for the city - next time you walk through them stop to take a closer look and appreciate their design and history, as well as their beauty.