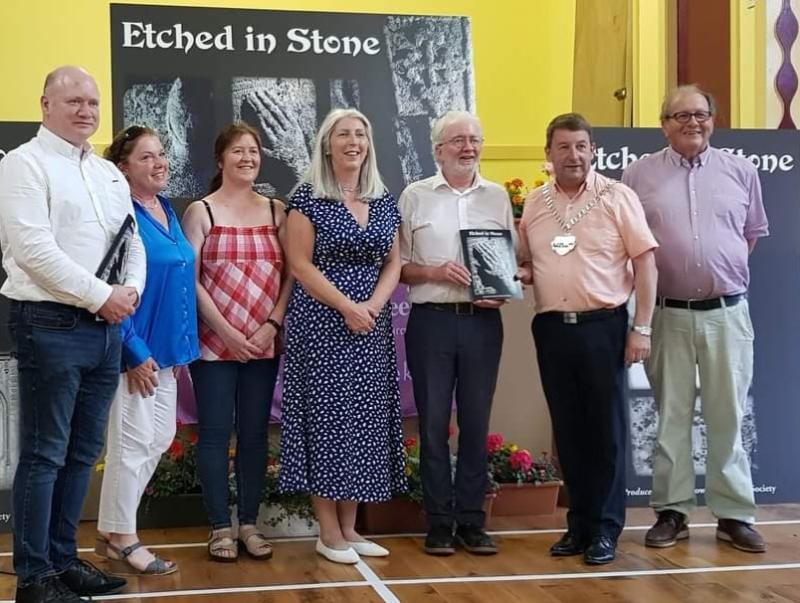 Johnstown Historical Society were delighted to launch their new publication entitled ‘Etched in Stone’ in the local community hall Johnstown on the opening night of Heritage Week 2022.

With this year’s theme for Heritage Week being sustainability in Heritage it was an appropriate time to reveal their project which was a culmination of works undertaken by the group over the previous four months which records for future generations the rich handmade history of the area.

These works were created by skilled stone masons from the medieval period up to the 19th Century. With Covid taking its toll on the numbers involved, the project was completed by Susan Garrett, Marie Garrett and Ailis Holohan, who all took to the roads around the parish in search of objects of interest.

These included the O’Tunney Carved tomb in Grangefertagh along with many recycled items from Fertagh which are today found in both St. Kieran’s and St. Marys Church. Also of interest were Foulkscourt Castle, Ballyspellan Spa Well and Bench Marks dotted around the parish.

Hundreds of photos were taken with many captured at night with the item of interest being illuminated by torch. This process enabled the group to identify much more detail which would otherwise be hidden when viewed in natural daylight. It is hoped that this visual record will enable these unique antiquities to be recorded for future generations.

The group were delighted that the Minister of State for Heritage and Electoral Reform Malcolm Noonan launched their book.

He noted that this was a project that could perhaps be repeated throughout the country and praised the group for their hard work.

The group thanked the Heritage Keepers programme for funding the project.

Etched in Stone is now on sale in Johnstown Post Office €5.