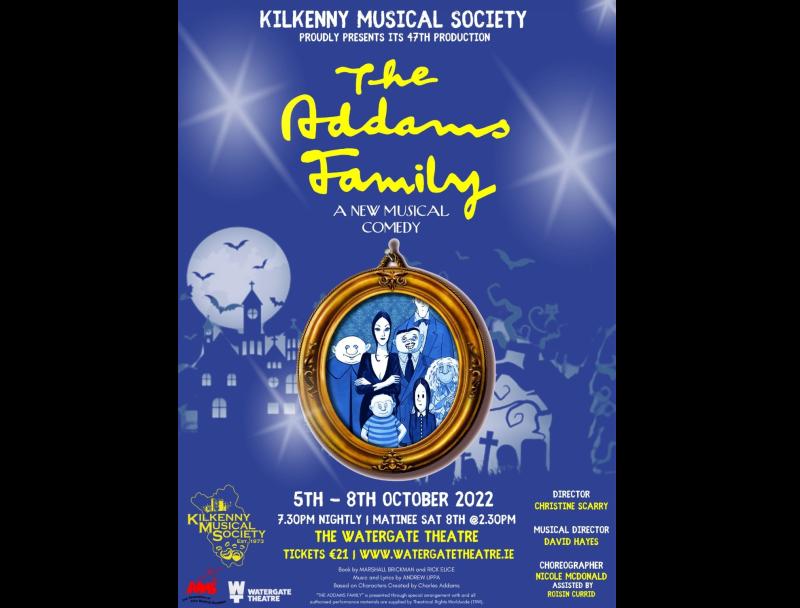 As theatres, galleries and cinemas in Kilkenny city and county cast off the shackles of Covid 19 and open to the public again, there is a group of Kilkenny performers eagerly waiting in the wings to step back into the spotlight.

Kilkenny Musical Society were just weeks from performing their production of The Addams Family in March 2019 when the pandemic struck. Rehearsals were in full swing with cast, chorus and production crew giving voice and life to this wonderful show. However, with Covid 19 prompting the swift realisation that the show would not go on, the hard-working members of Kilkenny Musical Society were forced to admit defeat. Again in 2021, the prospect of The Addams Family finally getting its moment to shine was also dashed.

But just as dawn follows darkness, the anticipated production of The Addams Family will finally grace the boards of Kilkenny’s Watergate Theatre. This musical is a comical feast, embracing the wackiness of the unique Addams clan. With renowned director and vocal coach Christine Scarry at the helm, choreography by Nicole McDonald, assisted by Róisín Currid, and under the musical direction of David Hayes, Kilkenny Musical Society will shortly return to the spotlight with this ghoulishly funny, and fiendishly entertaining family show.

Traditionally, the society stages its show in April, but October seems a suitable month to bring this macabre family to life! Kilkenny audiences will recognise the performers bringing the iconic characters to this local stage. Seasoned actor Fergal Millar plays family patriarch, Gomez. Wicklow native, Leah Penston, is the enigmatic Morticia, while talented teens and Kilkenny natives Leah Comerford and Ciaran O’ Dwyer star as Wednesday and Pugsley Addams. Other cast members include David Doyle as Fester, Claire Henriques as Grandma, Sarah Brennan as Alice and Mark Duffy as Lurch. With such a phenomenal front line, this musical comedy is already selling fast.

Following a drought of artistic expression, musical magic and escapism, the darkness of a world without the arts is over. Kilkenny Musical Theatre fans, both young and old, are encouraged to come out and support Kilkenny Musical Society over their four night run, from October 5- 8. There will also be a matinée on October 8. Tickets are available from the Watergate Theatre box office on 056-7761674 or from www.watergatetheatre.ie.