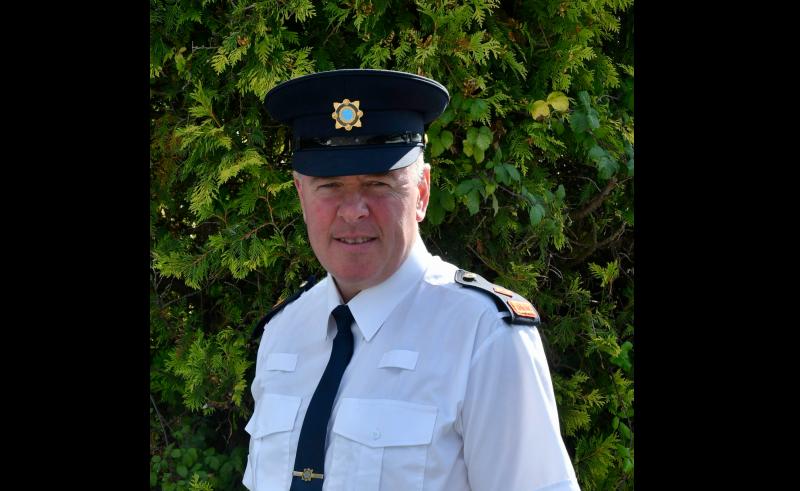 Superintendent Anthony Farrell, who has recently taken up the top post at Thomastown Garda Station, is enthusiastic about getting out into the community and meeting the people living in the area.

Policing is in his blood and he is a third generation garda - his grandfather, Tom Farrell was one of the founding members and was stationed in Birr while his father Joe was based in Athlone for 30 years.

Supt Farrell is back on familiar ground having being stationed in Co Kilkenny from 2009 to 2020.

“I am delighted to be the new superintendent for Thomastown, with my area of responsibility being South Kilkenny,” he said.

“I am already familiar with some of the fantastic people living and working in this area as for the most part I have been stationed in Kilkenny since 2009. I look forward to getting out and about again, especially after Covid and meeting more people in the weeks and months ahead,” he added.

Community-based policing is an integral part of Supt Farrell’s remit and he is passionate about having gardaí out in the community and also hopes to reach out to some of the more vulnerable people living in the locality.

“I intend to focus garda efforts on protecting the most vulnerable in our community, providing services to victims of crime and delivering a high standard to all.

“With my colleagues I hope to enhance and develop in particular positive contacts and connections with all sections of our community, which will in turn honour our organisational mission of keeping people safe.

“I am particularly conscious of vulnerable persons in our community, especially older people and I will be making every effort to reach out and connect with these people.
community feedback

Supt Farrell is a strong advocate of getting out into the community and listening to the needs of the people,

“We in An Garda Síochana here in Thomastown will continue to develop, improve and enrich our service to our communities in South Kilkenny.

“I want to ensure through consultation and community feedback, that our service is what people want and is delivered to areas in greatest need.

“At present we have 22 text alert groups operating in the Thomastown District. I want to build on this. Part of this process will be to reach out to people through other communication channels such as local media,” he said.

Supt Farrell is also committed to strengthening An Garda Síochana’s capacity to deliver a 21st century policing service to the people of South Kilkenny through more focused garda visibilty in communities.

“To start this process, I have already visited all the garda stations in South Kilkenny to meet my teams and also some of the local people living in the area.

The latest statistics show that crime has fallen in the Thomastown Garda District and Supt Farrell hopes to continue with this downward trajectory.

“Thankfully in large part due to the work of my colleagues, incidence of crime in this area has reduced. In 2021, through the proactive work of both detective and uniform gardaí, property crime fell by 5%, when detections have increased by 27%,” he said.

Supt Farrrell is determined that incidents of crime will continue to fall and will make the best use of the resources available to him to try and ensure that this happens.

“I am acutely aware of the impact of crime can have on victims. Central to all my actions will be victims of crime,” he said.

“I will take it as a personal responsibility to reduce levels of crime, make our roads safer and enhance connections with our communities. I am also conscious of the of the silent victims of crime in our community especially domestic violence.

“I encourage people in these difficult situations to come forward to An Garda Síochana and I assure you, you will be dealt with in a caring and sensitive manner in the strictest of confidence,” he added.

Supt Farrell is also prioritising road safety, an area of policing he is all too aware of as he was responsible for roads policing and community while stationed in Kilkenny as an inspector.

“I aim to keep our roads safer for the remainder of 2022, and beyond. So far this year there has been two fatal road traffic collisions,” he continued.

“I will continue to work with our roads policing unit to improve this situation. One fatality on our roads is too many.”