Memories of the Queen

Sharing a royal date, in more ways than one 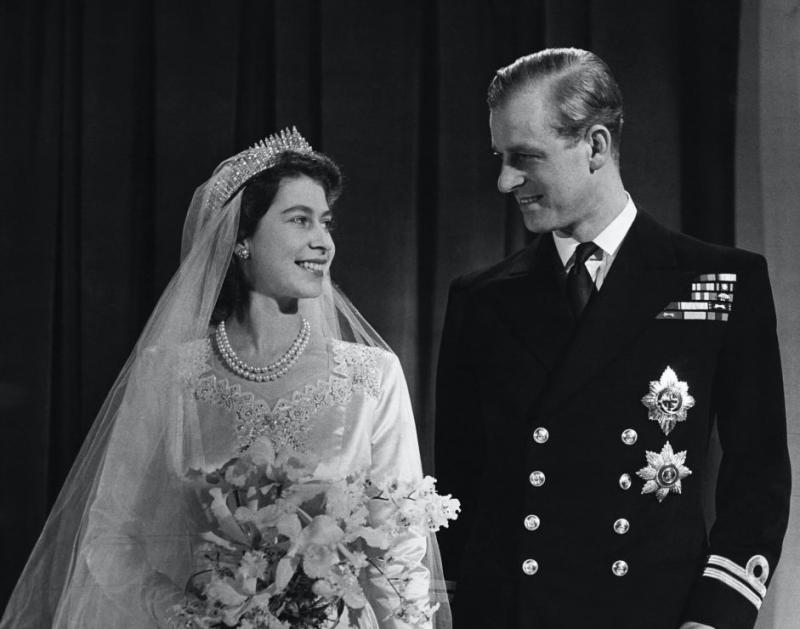 The Royal Wedding at Buckingham Palace on November 20, 1947

My late grandmother at the tender age of 97 spoke a lot about the day Queen Elizabeth and her late husband Prince Philip sent her an invitation for afternoon tea at Buckingham Palace. They received the Royal invite because they shared the same wedding day, and it was coming up to their 50th Wedding Anniversary. 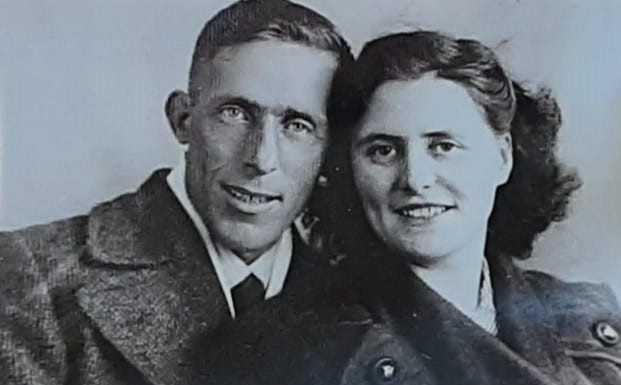 According to Nanny Noreen “we weren’t the only ones invited to the Palace that day, the Royal couple invited everyone who was married on the same day as them - November 20th, 1947. We were all invited to celebrate our Golden Wedding Anniversaries together in the splendour of Buckingham Palace”.

That wasn't the only royal date that the two couples shared. Both the Queen and my grandmother took their last bows and joined their devoted husbands in heaven this year.

Coincidentally Nanny Noreen was laid to rest on the day of the Queen's Jubilee last May. Nanny was 97 years old, and the Queen was 96 years old. May they all rest in peace now with their beloved.

My grandparents may have been married on the same day as the Royal couple, but their lives were worlds apart. Nanny and Grandad are both from Ireland originally, Nanny left the Comeragh Mountains, Co. Waterford at 19 years of age for England and Grandad left his home of Spiddal, Co. Galway, aged 25. They met each other in London towards the end of World War II and the rest is history!

Post war London was in devastation and was built back up brick by brick. Grandad’s first job was in demolitions, dismantling bombed down buildings after the war. While Nanny was a young nurse in St Bartholomew's Hospital. They married six months after meeting at a Pride of Eireann Dance. She was 23 years old, and Grandad was 33.

Their wedding was not the lavish affair that the young Royals enjoyed, Nan recalls “everything was rationed in England back then, we didn’t even have a biscuit on our wedding day. Your Grandfather was done up like a Lord, from the shillings he had saved but I had to borrow an overcoat from a fellow nurse. I was so late for our wedding because the mean old Sister in the Hospital held me back, Dan thought I was going to stand him up!” 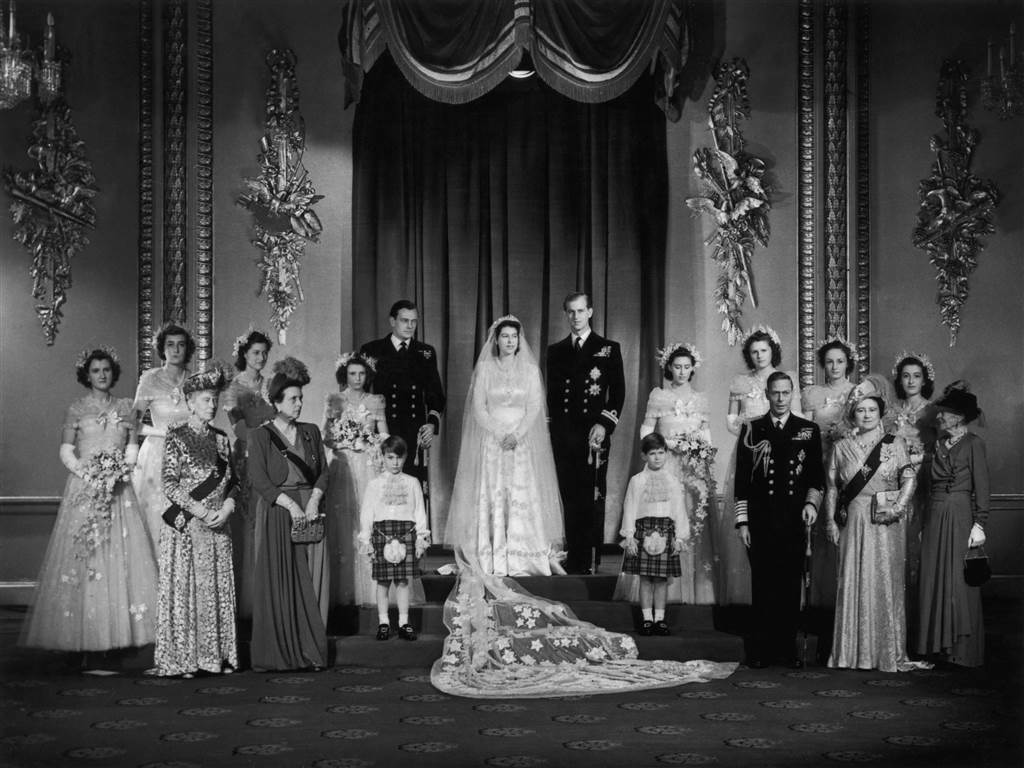 This is a story I have heard a million times growing up but I suppose it became more real from watching the TV series ‘The Crown’ and the burial ceremony earlier this year of the late Prince Philip.

Nanny was glued to the television on April 17the last, watching every last detail of Prince Philip’s funeral from Windsor Castle. She was always fascinated by the Royal family after living in London for nearly 40 years.

Nanny and Grandad settled back in Ireland in 1980 but they never forgot their life in England and the opportunities it gave them. We are Irish to the core, but Nanny always remembers their life there with fondness, even down to the dishes she cooked every day for us.

Back in the ‘80s when Irish people religiously ate meat and two veg dinners, our house felt very exotic with Nanny’s cooking. Every day after school she would feed us her favourite recipes, the ones she enjoyed with her much diversified London friends. We often ate Indian curries full of cooking apples and raisins, spaghetti Bolognese, toad in the hole, bangers and mash, Yorkshire puddings, pigs in blankets to name but a few.

Life was good to them in England with a great Irish community around them. To her dying day she still told us stories of post war London, right up to the crazy swinging 60s. She reminded all the nurses and doctors about how she was a nurse during the war, as she took her last breath last May. So, you see, that invitation to Buckingham Palace on their joint Golden Wedding Anniversary was very special.

Unfortunately, my grandparents could not make the journey back to the UK, Grandad was 83 and his heart was bad. So instead, we threw them the wedding reception they never had in Bennettsbridge Community Hall. With 150 guests in attendance for a sit-down meal and Fr. Duggan said mass before that party, Nanny said it was a feast fit for a Queen! 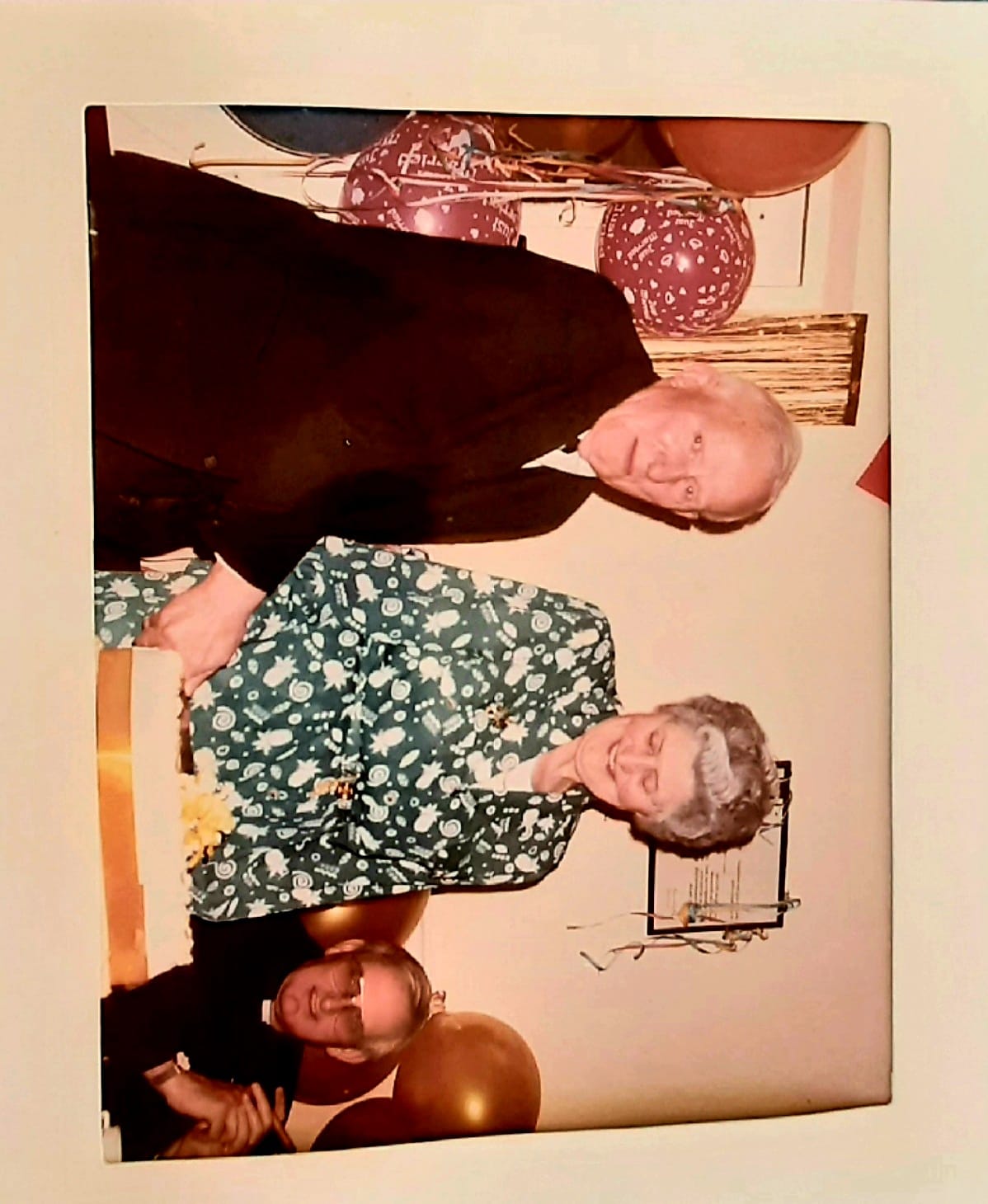 Sadly, Granddad passed away a year later, on their 51st Wedding Anniversary. Nanny at 97 years of age thought of her love every day, especially as she looked at the framed letter they received from Queen Elizabeth and Prince Philip, which read…

“This is a special year for you and for us, and we are sorry that you cannot be at Buckingham Palace on 15th July to celebrate our Golden Wedding. We hope that you have a very happy anniversary and send our best wishes and congratulations to you both.” 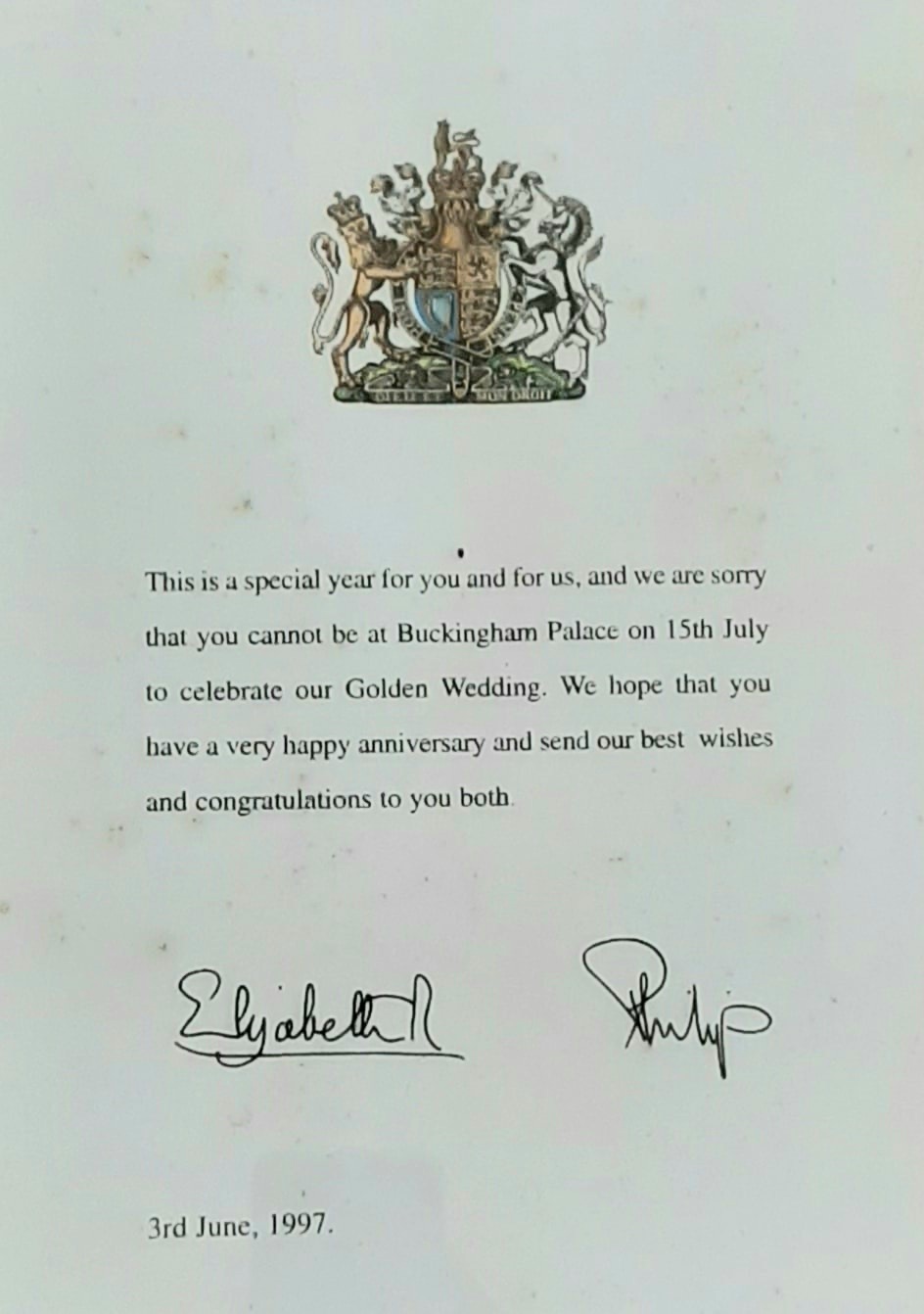 on their shared 50th Wedding Anniversaries