How can do, camaraderie and creativity have driven the Ros Tapestry 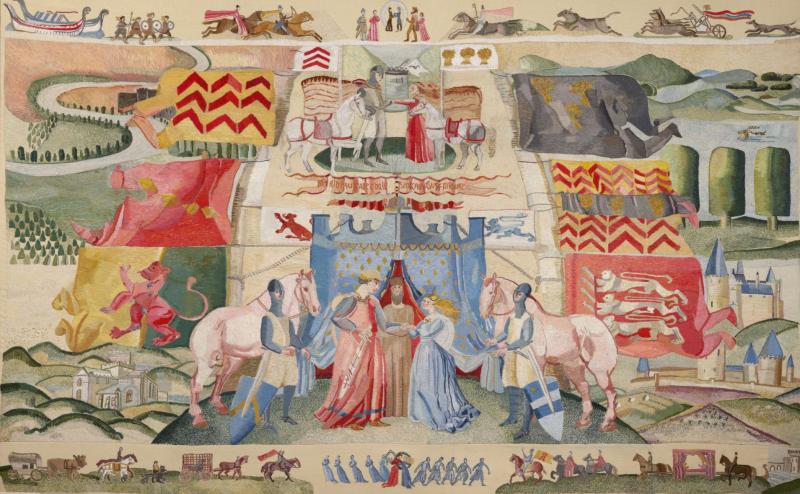 The Ros Tapestry depicts the Norman history of Ireland's Ancient East: a panel showing the marriage of Isabel de Clare and William Marshal

The Ros Tapestry is a unique work of incredible beauty, skill and patience. It has involved  thousands of hours of intensive labour and millions of stitches since it was first started in 1998. Over 150 voluntary stitchers, predominantly women, have created the 15 large tapestries that make up this textile narrative. It is a striking example of creativity and community spirit on a grand scale and depicts the Norman history of Ireland’s Ancient East, with events including the landing of the Normans at Bannow beach, the Siege of Wexford and the marriage of Isabel de Clare and William Marshal.

Originally the brainchild of Rev Paul Mooney, of St. Mary’s Church in New Ross,  it was inspired by the famous Bayeux Tapestry in France. It is one of the largest series of embroidered tapestries in Europe with each panel (6 feet x 4.5 feet) depicting a significant event in the history of New Ross and the surrounding areas. It shows the history, costumes and way of life of Ireland in the 13th century in a creative and dynamic style.

New Ross is central to at least four counties which were heavily influenced by the Normans – Wexford, Waterford,  Carlow and Kilkenny.  So, it seems apt that the tapestry is now on loan to the OPW and on display in Kilkenny Castle until September 2023. The luminously beautiful panels seem at home in the castle and the exhibition environment being devoid of natural daylight (which can fade  the wool) is an ideal space for this national treasure.

Ann Griffin Bernstorff, was the  Wexford artist, commissioned to paint the original cartoons  and her daughter Alexis Bernstorff, a textile specialist  living in Brownsbarn, Kilkenny has trained the voluntary embroiderers how to stitch the panels since the off.

The style of embroidery is crewel work which uses seven to eight basic stitches. Long and short stitches, stem stitching, couching, bullion and French knots all utilise stitch direction, shape and volume to bring the tapestry subjects dramatically to life. It takes about one hour to stitch one square inch so the work is a slow painstaking, process.

For Ann, “Camaraderie is at the very heart of the project”, as is the desire “to be involved in the creation of an object that is going to endure”. She is full of praise for the patience and skill of the embroiderers, describing their work as “needle painting on an enlarged and very expressive scale”.

She is also very keen to emphasise that it's a “Can do project - everybody can do this.” Even amateur stitchers can build up confidence, observing that “some people have never picked up a needle in their lives” prior to working on the tapestry. To illustrate her point that the project is “totally open to everyone”  she explains that one stitcher was a male refugee from Ghana living in New Ross.

She passionately feels that all the makers should be celebrated and that perhaps in the future a panel with the names of all the stitchers could be displayed alongside the tapestry.

Speaking  personally, Ann says that “the work has been a massive part of my life experience” and  that she has made “great friends all over Wexford and Kilkenny via the tapestry”. Ann describes the Ros Tapestry as “a legacy for everybody”  and that the women should be very proud of their creation, as should their children and grandchildren.

Over the decades, the stitchers have worked in venues, from private houses to community centres and converted cowsheds, to a  castle, a mill and a fort. As far as possible, the panels are stitched by groups living in the locality of the historical events or scenes depicted. Groups of stitchers have come from around Wexford but also from Laois, Waterford and Kilkenny towns including Inistioge, Kells and Skeaghvasteen.

The first tapestry was completed in 2002 and to date 14 of the 15 tapestries are completed. The final one, depicting the Battle of Ossory near Freshford in 1169, is now being stitched in Kilkenny and is nearing completion in Rothe House, a perfect environment for the work. Ann  has described the blend of the Ros Tapestry and Rothe House as a “happy marriage”.

One of the Kilkenny stitchers is Felicia Hulme Beaman, who moved to Kilkenny from Dublin about 15 years ago. Being slightly “at sea” in a new place, Felicia saw a poster about the tapestry in Graignamanagh and went to investigate it in New Ross. She was instantly “taken aback by the beauty of it” and eventually joined the group as a stitcher. She has found the experience extremely fulfilling, praising not only the sense of “community” amongst the women but also how “peaceful and meditative” the process of stitching is. Felicia had a background in craftwork and always liked using her hands. As someone married to an art restorer, she also appreciates the “terrific”  artistry of the tapestry and how “the transposition from art to stitching is very skillful”. She has “learnt a lot” from her involvement with the Ros Tapestry and has found the subject matter “so interesting historically”.

The Ros Tapestry exhibition is part of the self-guided visit of Kilkenny Castle. Admission is free but tickets must be booked in advance on https://kilkenny.admit-one.eu/?p=calendar&ev=SELFGUIDED