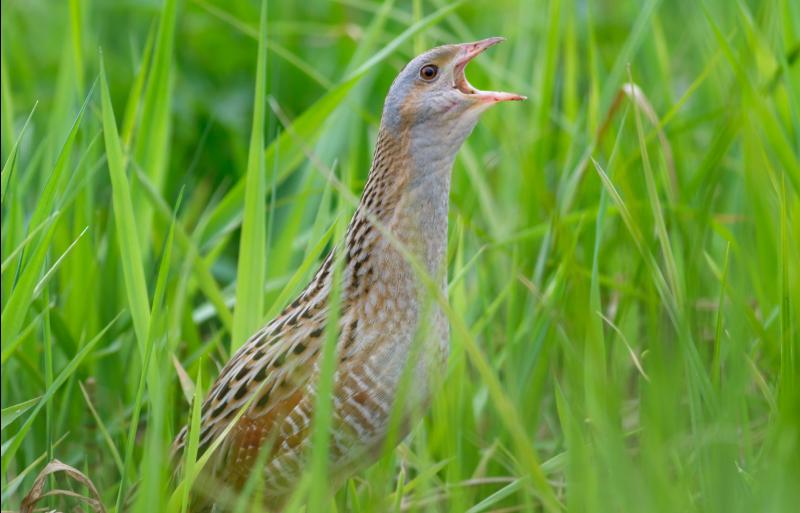 At least 197 calling male corncrakes have been recorded in Ireland in 2022. This represents a 5% increase on the 188 birds recorded in 2021 according to the National Parks and Wildlife Service at the Department of Housing, Local Government and Heritage.

The corncrake, a shy brown bird whose harsh monotonous cry was always associated with summer, had all but disappeared from the Irish landscape so this small increase represents encouraging progress for the species. Intensive faming practices from the 1970s on have progressively diminished natural habitats favoured by the corncrake but now farmers are being asked to reverse their normal mowing practice and to start cutting grass in the middle of their fields and work their way out to the edge to provide cover for the land-based birds and their nests.

The increase in numbers of the much-threatened bird has been welcomed by Minister of State for Heritage and Electoral Reform, Malcolm Noonan TD.

Birds were recorded from five counties with Donegal showing a population of 110, Mayo 62, Galway 23, and both Sligo and Kerry have recorded one bird each.

Among the reasons for the increase is the Corncrake LIFE project, which aims to revive the conservation status of the corncrake and ensure it remains a part of rural landscapes for years to come. The project, which is in its second year and is managing almost 500 ha of farmland in cooperation with landowners and farmers across Donegal, Mayo and Galway, was launched earlier this year by Minister Noonan.

The Heritage Minister said this project has raised awareness of the corncrake amongst landowners, farmers and the public in such a positive way that it is now yielding an increase in the numbers of the bird.

“It’s testament to the project and its incredible work in the community that we are seeing a marked increase in corncrake numbers, especially on its eight project sites. The call of the corncrake was once a ubiquitous sound in meadows and grasslands across Ireland. However, rapid changes to farming practices in the 1970’s spelled doom for the bird. Funding streams, such as the EU LIFE programme, and a change in farming has allowed my Department, working in conjunction with stakeholders in communities to put measures in place to help secure the future of this species, which remains a high conservation priority at a national and European level".

Corncrake LIFE Project Manager Dr. John Carey said: “We have made some good progress in getting conservation measures in place with project participants and the result-based scheme has had a positive response from farmers. Overall bird numbers have increased in the LIFE project areas too, with some areas showing significant increases.”

He went on to say the locally led ACRES cooperation projects will have an important role to play in 2023. “We are working closely with them to ensure that farmers who select corncrake measures in the scheme will also have full access to the LIFE project and all the additional supports it brings with it. While numbers are moving in the right direction, there is still considerable work required to save the corncrake.”

Minister Noonan also praised the Corncrake Grant Scheme, which is administered by the National Parks and Wildlife Service (NPWS), for its role in the increase:

“It proved very popular this year with many farmers choosing to delay mowing until August and September. Wildlife-friendly mowing and the provision of refuge strips in fields was also taken up by the majority of participants,” Minister Noonan said.

NPWS Divisional Manager Denis Strong has been involved in corncrake conservation since the mid-90s and says the increase in numbers is down to the number of farmers coming on board.

“It’s great to see the birds doing well again, particularly in areas like the Mullet peninsula where they have increased by 37% on last year’s figures. It’s a testament to the many farmers who are involved in both the Corncrake LIFE project and those who took up the grant scheme which has been running successfully for many years now.”

Once synonymous with the Irish countryside, the population of corncrake has declined by 85% since the 1970s, with a similar decrease in range, meaning that the species is now effectively confined to Connacht and Donegal, including offshore islands. Supporting Corncrake in these remaining strongholds is critical to the survival of this species in Ireland.

More information on the Corncrake LIFE project can be found at www.Corncrakelife.ie

Corncrake LIFE will be exhibiting at the National Ploughing Championships: Block 3, Row 19, Stand 310