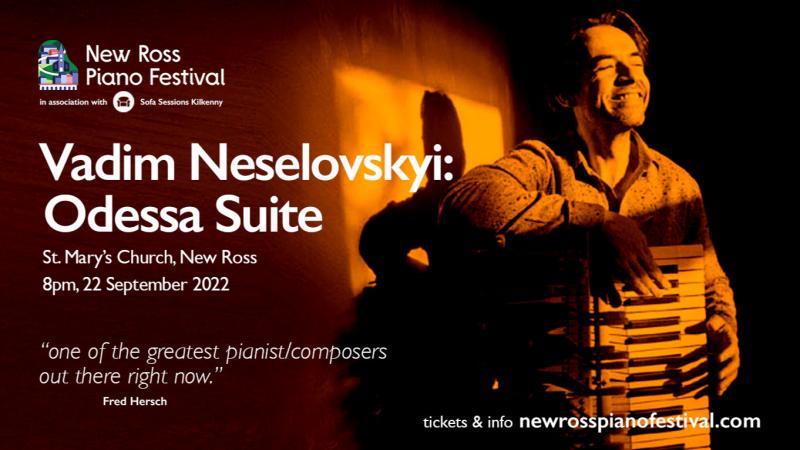 New Ross Piano Festival  have announced a change to their festival line up this Thursday. Due to a family emergency, Craig Taborn has had to withdraw and in his place star Ukrainian pianist Vadim Neselovskyi will perform his Odessa Suite instead.

Vadim has been described as “one of the greatest pianist/composers out there now” by renowned US pianist Fred Hersch and “a true genius” by legendary vibraphonist Gary Burton, with whom Vadim has worked.

The Los Angeles Times has praised Neselovskyi’s “extraordinary playing” while The Guardian (UK) has called him “the most promising of the young improvisers.” All About Jazz recognised his singular versatility, referring to him as “a strong pianist [as well as] a composer who blends form and freedom in new ways.”

Those diverse talents have attracted the attention of revered artists crossing the boundaries of genre, including legendary vibraphonist Gary Burton, who famously enlisted Neselovskyi for his acclaimed Generations Quintet; the prestigious Graz Philharmoniker, which performed his composition “Prelude for Vibes” on their New Year’s program; iconoclastic composer/saxophonist John Zorn, who invited Neselovskyi to contribute to The Book Beriah, the final instalment of his quarter-century Masada project; and French horn/alphorn pioneer Arkady Shilkloper, a profound influence with whom the pianist now shares a longstanding duo collaboration.

A child prodigy in still-Soviet Ukraine, Neselovskyi became the youngest student to be accepted into the famed Odessa Conservatory. At the same time that he was honing his classical virtuosity, he was hearing such jazz giants as Keith Jarrett, Chick Corea and Thelonious Monk via CDs sold by sailors passing through the bustling port city (or, more often, tapes dubbed from those CDs). At 17, he moved with his family to Dortmund, Germany, continuing his classical studies while establishing himself on the local jazz scene.

Whether as a pianist, a composer, an improviser, a soloist or a bandleader, Vadim Neselovskyi creates music that is truly inspired and wholly unique. That explains why his work has been played by jazz greats like Randy Brecker, Antonio Sanchez, Julian Lage, and Gary Burton, as well as classical artists (Daniel Gauthier, whose recording of Neselovskyi’s “San Felio” won an ECHO Classical Award) and symphony orchestras in the United States (Spokane Symphony, Lancaster Symphony) and Europe (New Philharmonic Westfalen, INSO Lviv Symphony

In light of events in Vadim’s homeland, the festival will be dedicating this concert to the people of Ukraine, and there will be a collection at the concert, with proceeds going to the Immigrant Council of Ireland to help Ukrainians in Ireland to apply for family reunification for loved ones impacted by the crisis.