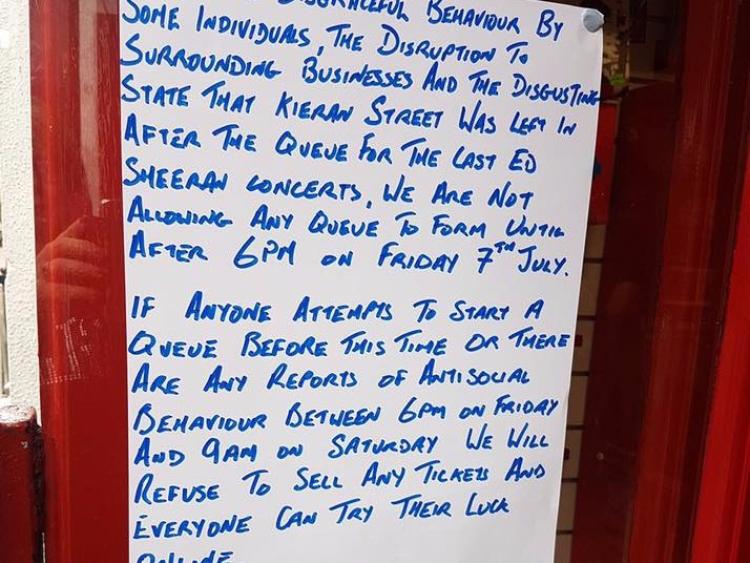 There will be no queuing for Ed Sheeran tickets in Kilkenny before 6pm this evening, with Rollercoaster Records on Kieran Street laying down the law and warning people to behave.

Tickets go on sale tomorrow (Saturday), and while some outlets around the country have had fans queuing since last night, the same won't be happening here - until later anyway.

Disappointing scenes marred the last occasion fans queued overnight on Kieran Street for Ed Sheeran tickets, in early February. Arguments broke out among some of those queuing, while a number of people who were not part of the queue were assaulted in more than one incident.

The local record store has now put a sign on its door instructing people not to queue until later on - and if there is any trouble, there might be no tickets for anyone.

"Due to the disgraceful behaviour by some individuals, the disruption to surrounding businesses, and the disgusting state Kieran Street was left in after the queue for the last Ed Sheeran concerts, we are not allowing any queue to form until after 6pm," says the sign.

"If anyone attempts to start a queue before this time or there are any reports of anti-social behaviour between 6pm on Friday and 9am on Saturday, we will refuse to sell any tickets and everyone can try their luck online."

Kieran Street has been in the spotlight again in recent weeks, with a number of incidents of anti-social behaviour, assaults, and local businesses reporting bullying and intimidation.