Peak Tidy Towns season but who are the roving mystery inspectors?

Here’s a clue, you may have met them before. 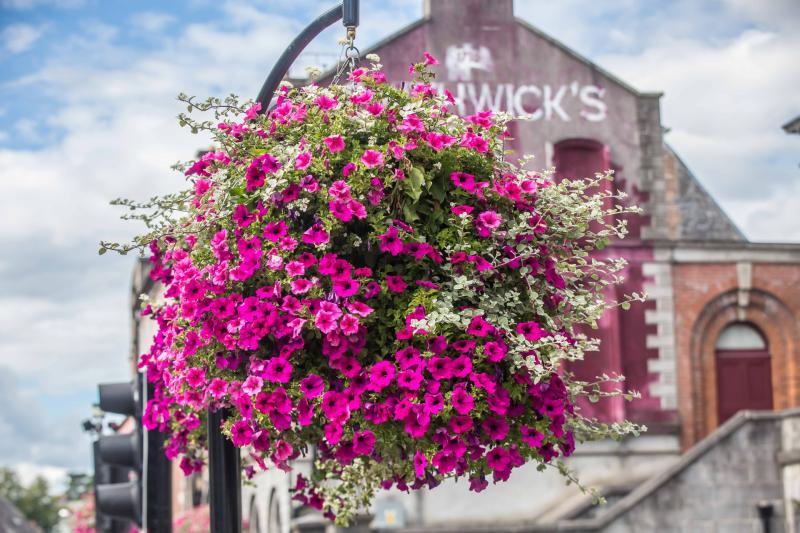 Floral arrangements are in abundance across the county

There are 22 towns, villages and a city across the county trying to stay on top of flower beds, making sure streets are clean and park benches are freshly painted.

All of these valiant efforts are to win the Tidy Towns competition or at least win their category and get a share of the €250,000 prize money likely to be paid out nationwide this year.

Everyone is looking to secure a coveted national award for their homes, it’s indicative of the community spirit in many parts of the county.

Prizes are available for the best village, small town, large town and urban centre with one of them receiving the overall prize of Ireland’s Tidiest Town.

Efforts by volunteers throughout Kilkenny are ongoing but it reaches its peak during the summer months with all entrants completely unaware as to when the judges will arrive in their area.

It’s the great unknown, places just have to be shipshape 24 hours a day. But who are these mystery adjudicators that torment people up and down the county?

Can they be spotted? The truth is, they’re for the most part inconspicuous, but they can be caught in the act of judging.

There are 26 of them to asses the 870 entrants for this year's competition so it’s a busy summer for them.

They are an independent panel of judges recruited by the Department of Arts – which has responsibility for the competition.

The adjudicators are made up of many different professions including environmental scientists, ecologists, biologists, landscapers, architects, community activists, etc.

Unfortunately, they wear their own clothes. They have no special uniform and will blend into a community.

But here’s their weakness, some of the Tidy Towns adjudicators may be known to Tidy Towns committees.

They speak at Tidy Towns events run by the Department, local authorities and Tidy Towns committees.

So if you spot one around your area, round up the volunteers and get the place in order if it isn't already.

There’s a specific window of time to be on the look out and we’re nearing the end of it. The adjudication commenced on June 10 and will be completed by mid-August.

It typically takes place anonymously, Tidy Towns are not notified when a judge is in their area.

The competition is assessed under a number of headings with marks award for a area’s success in each category.

So if you are still readying your area,tidiness and litter control is one of the categories that you can stay on top of.

They will assess the general lack of clutter, blocked footpaths, evidence of control of weed growth at kerbs and the absence of graffiti.

Some of the entrants this year for Kilkenny include: Ballyragget, Callan, Castlecomer, Clogh, Freshford, Kells, Urlingford, Kilkenny and Windgap.

Last year Kilkenny city received a mark of 325 with the overall winner, Skerries in Dublin, receiving a mark of 327, so it’s very fine margins.

The announcement of winners will be on Monday, September 25 in The Helix.

We can only guess as to when Kilkenny’s entrants will be/were inspected, but at least you know what to look out for, kind of.

For some, these roving mystery judges may have already been and gone.