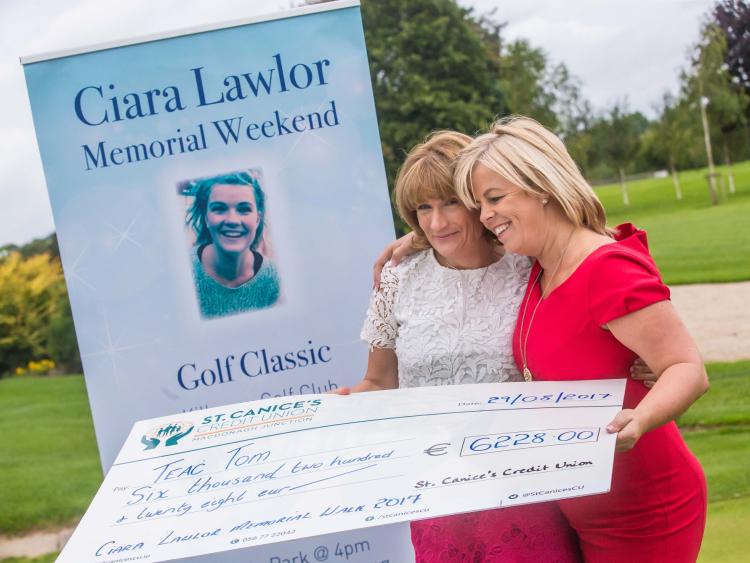 The heartbroken family of Kilkenny teenager Ciara Lawlor have thanked the local community for their support over the past year.
Ciara Lawlor died suddenly during a Kodaline concert from a heart condition. Eimear Lawlor said that her family were ‘overwhelmed’ by the kindness and generosity shown to them since her daughter's death.
A number of events were held in May and raised €27,000. A golf classic on and the walk in the Castle Park raised over €25,000 while the Callan Golf Club Open day raised another €2,000. All proceeds were donated to three charities - The Heart House, First Light and Teac Tom.
“We want to thank everyone who donated prizes, volunteered on the day, sold tickets and gave up their time to help organise the events and the tennis club for allowing us to use their premises to register for the event,” she said.
Ciara's mother also explained why the family chose the charities.
Heart House is a family heart screening clinic where relatives of persons who have died because of SADS (sudden arrhythmic death syndrome) can be screened for this inherited cardiac condition while First Light is a counselling service for people affected by the sudden death of a young person.
Eimear also told The Kilkenny People how Kodaline singer, Mark Prendergast and his parents had visited her family during the Summer.
“He handed us a CD and a letter which explained how the band had written a song for Ciara. I listened to the song and it was incredible,” she said adding that the song will not be released until early next year.
A guitar was also donated by Kodaline and was raffled and won by Ellie Devane (12) whose parents won the Nore Bar on Greens Bridge. There are plans to unveil a plaque in the bar to remember the popular Kilkenny youngster.
An internal and external investigation into the care of Ciara Lawlor at Crumlin Children's Hospital is ongoing.