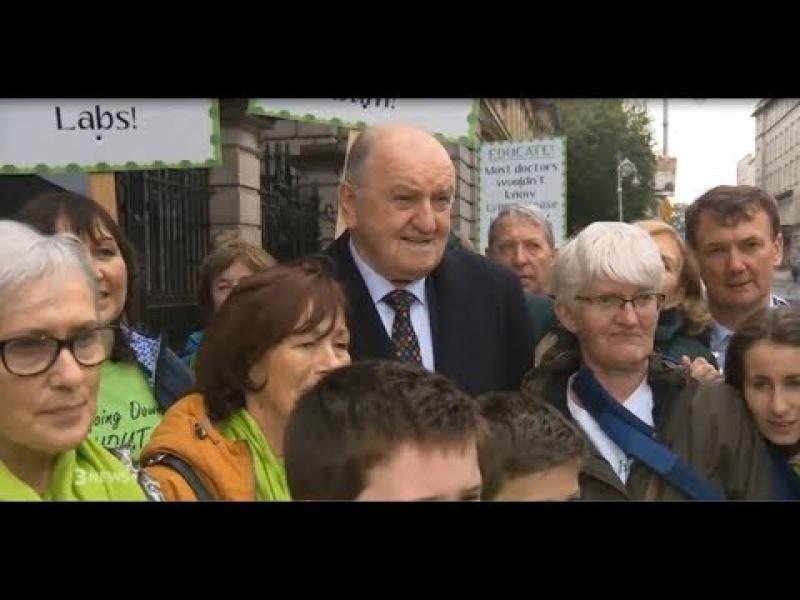 George Hook who is raising awareness over Lyme disease

Veteran broadcaster, George Hook, has lent his support to a campaign to raise awareness on Lyme disease.
George Hook spoke live on air to Community Radio Kilkenny City presenter Nicci St George Smith, who lives with the condition, about taking up the cause for Lyme Disease sufferers in Ireland.
His friend and colleague, former England International Rugby Captain, Matt Dawson, recently spoke out about his battle with Lyme Disease and how a lack of awareness regarding the seriousness of the condition among the medical profession, left him needing emergency heart surgery.
Enraged by this and the plight of young people throughout Ireland including many in Kilkenny who live with Lyme disease, George has decided to take action.
He plans to bring Matt Dawson and other International sports personalities to Ireland to speak out about the misconceptions and health implications of undiagnosed Lyme disease and tick borne co-infections.
During the 20-minute long interview which was broadcast on Community Radio Kilkenny City last Thursday afternoon, he lambasted the HSE and the current government for their neglect of patients and the dangers of their circulating of misinformation regarding the issue.
“Women being dismissed by the HSE and being branded as hysterical, its the greatest inequality in Ireland today… How dare the HSE, how dare the medical profession do that”, he stated.
“The HSE is 360 degrees wrong with the information they put out on Lyme disease, they have even called those adversely effected by vaccines emotional terrorists, its unacceptable”
“We need a Minister for Health who has empathy, his own health issues are irrelevant, he needs to help the people he was elected to represent - We need an awareness campaign, accurate testing and adequate treatment for Lyme in this country.”
Lyme has become far more prevalent in Ireland over the last two decades.
“This wall of ignorance isn't just about Lyme Disease, its about homelessness, its about every inequality, its right across the board and its just not good enough.”
Speaking about the fallout from his controversial comments regarding rape last month he said “I made a mistake, I know that! I apologised sincerely and I am paying the price. If I were a younger person or maybe a vulnerable person who lacked self esteem who knows. When I thought about ‘that’, thats when I started to worry. I’m not upset for myself but the effect on my children and my family has been tough.”
Speaking about his return to Newstalk, he said he would be back on the air in December but couldn't reveal any details about his new show just yet. Adding ‘all I can say is that I wont be walking in the forests and I’ll be avoiding the Ticks'.
Lyme disease is a bacterial infection transmitted by the bite of a deer tick. Untreated it can lead to symptoms similar to MS, Arthritis, Chronic Fatigue Syndrome, Parkinson's, and Dementia.
A number of Sudden Adult Death Syndrome cases have been attributed to Lyme Disease due to untreated Lyme Carditis. The main support group for Lyme Disease patients in Ireland is Tick Talk Ireland and is run by Kilkenny woman Ann Maher, who contracted Lyme while in America twenty years ago. This year George Hook agreed to become their Ambassador.
Lyme disease is currently one of the world's fastest growing vector-borne infection (spread by ticks). Tick Talk is Ireland's first Lyme disease support group and it aims to spread awareness and encourage quick diagnosis and treatment of this debilitating disease.
The symptoms of Lyme may vary according to the stage of disease and can range from mild to severe, depending on the immune system of the sufferer, stress, length of infection as well as the level of co-infections in the body such as bartonella, anaplasmosis and babesia. Some people may have asymptomatic Lyme disease with no symptoms present, however symptoms may emerge months or years after the initial infection.
Over 200 people attended a rally outside Dail Eireann earlier this year to raise awareness of the medical condition and its effects.
For more information see www.ticktalkireland.org